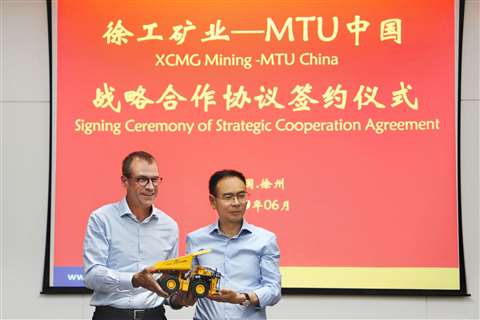 A strategic cooperation agreement was signed in Xuzhou, China, at the headquarters of XCMG by senior executives of both companies.

According to the agreement, Rolls-Royce and XCMG are committed to exploring opportunities to integrate Rolls-Royce’s MTU power and propulsion systems, including MTU Series 2000 and 4000 engines, into XCMG equipment for Chinese and international mining projects.

XCMG were ranked sixth in the last Yellow Table – a ranking of the world’s top 50 OEMs according to equipment sales figures by International Construction magazine.

Li Zong, XCMG mining machinery, general manager, said, “The win-win cooperation is aligned with our development strategy to continue to enhance technology and market leadership home and aboard. The combined force of MTU and XCMG will allow us to leverage synergies and create shared value.”

The two companies also agreed to collaborate on the testing of new power and propulsion technologies, including gas engines and hybrid solutions and applications of digital technologies to drive low-carbon and sustainable development of the mining industry.