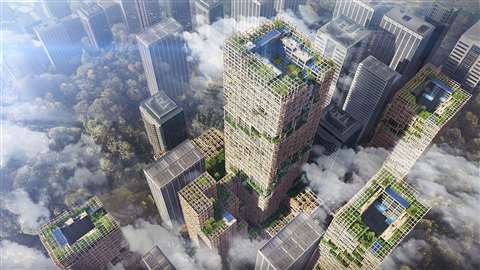 Artist’s impression of the W350 timber high-rise in Tokyo, Japan

The W350 concept was developed primarily at the company’s research and development facility, Tsukuba Research Institute, in collaboration with the architect Nikken Sekkei.

At 350m in height, the high-rise will have 70 storeys and a total floor space of 455,000m2 dedicated to a mix of shops, offices, hotels and residential property.

In total, about 185,000m3 of timber will be used. The building will be 90% wooden and will use a braced tube structure in which steel frame vibration control braces are positioned inside a column and beam structure. This helps to prevent deformation of the building in the event of earthquakes and high winds.

The interior will be composed entirely of wood, and the outside of the building has been designed with balconies that will contain plants, providing habitats for wildlife.

It has been estimated that the project will come to a total cost of JPY600 billion (US$5.6 billion), which is about double that of a high-rise building constructed using conventional materials and technology. However, it is expected that technological development over time will bring that cost down.

The W350 concept aims to provide a model for how wood can be used more widely in urban construction, thereby increasing biodiversity in cities and reducing the burden on the environment by cutting down on the carbon footprint. In this particular project, it was said that approximately 100,000 tonnes of CO2 will be fixed.

This approach was also said to promote the maintenance of healthy forests, and as timbers within the building are replaced over time, the old wood can go on to be repurposed in housing, and subsequently used as new building materials and biofuels.

The building is planned to be completed in 2041, marking the 350th year since the foundation of the business in 1691.