What are the key trends in transport infrastructure?

Transport infrastructure projects are increasingly ambitious, such as high-speed rail links that are gaining in popularity globally. 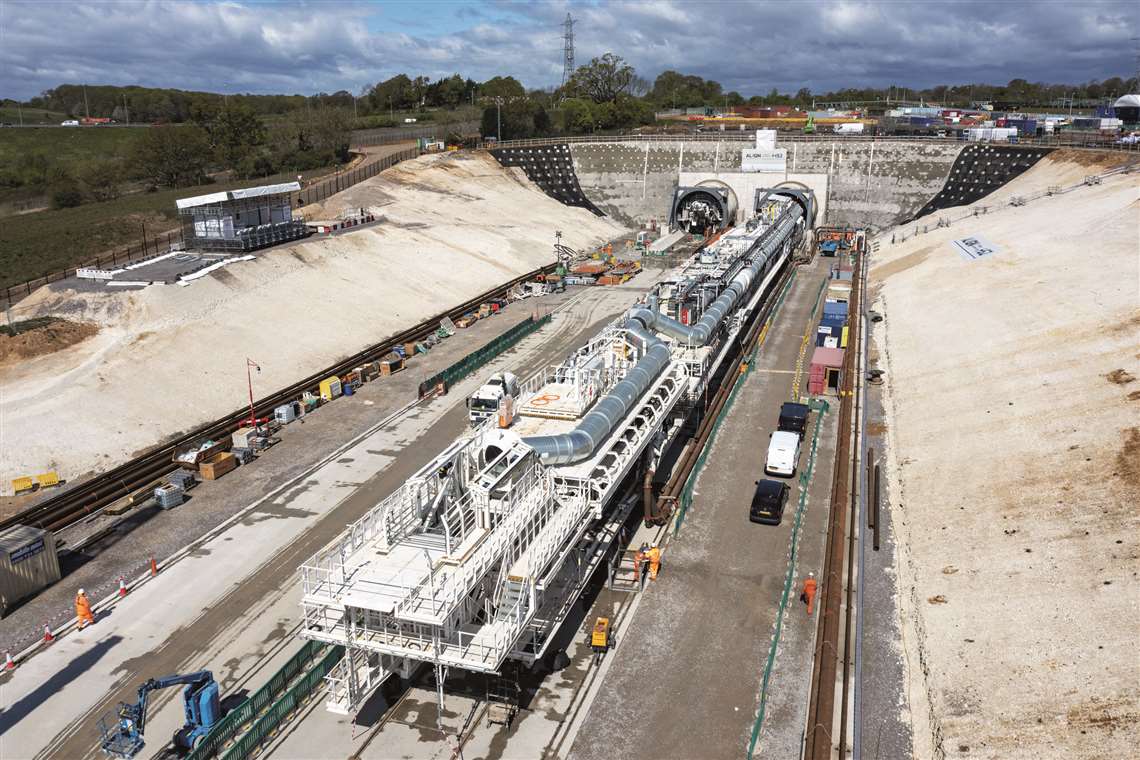 Costs have risen sharply for the UK’s HS2 project

With more vehicles on the road adding to congestion, and governments pledging to reduce carbon emissions, high-speed rail has become an increasingly attractive option.

A recent report by the World Bank estimated that the transport sector contributes 23% of global energy-related greenhouse gas emissions – a figure that could reach over 30% within the next decade under a business-as-usual scenario.

The report added that, “Ambitious solutions are needed to lower the carbon footprint of existing and new transport systems. The most significant opportunities to move the sector toward climate sustainability include shifting policies and investments in the design of public transport networks, vehicle efficiency, demand management, regional development, and land use.”

High-speed rail is certainly more ‘green’ and sustainable than some other mass transport options, but there are numerous problems associated with it – not least the technology required and buying land in what are often already urbanised areas.

Costs for the project have skyrocketed. Currently, phase one of HS2 is expected to cost in the region of £44.6 billion (€49.2 billion). On phase two, which recently had cost estimates running as high as £106 billion (€117 billion), work is now expected to be completed within a new target of £98 billion (€108 billion).

There have also been controversies over the compulsory purchase of land and homes needed for the project – a recent report said that the firm behind HS2 was “dishonest and misleading” in its handling of a compensation claim from a member of the public who had to sell their home to make way for the line.

Phase one of the project, set for completion between 2028 and 2031, will connect London and Birmingham, with trains expected to run at speeds of up to 400km/h. The full network will not be completed until at least 2035.

US warming to high-speed rail? 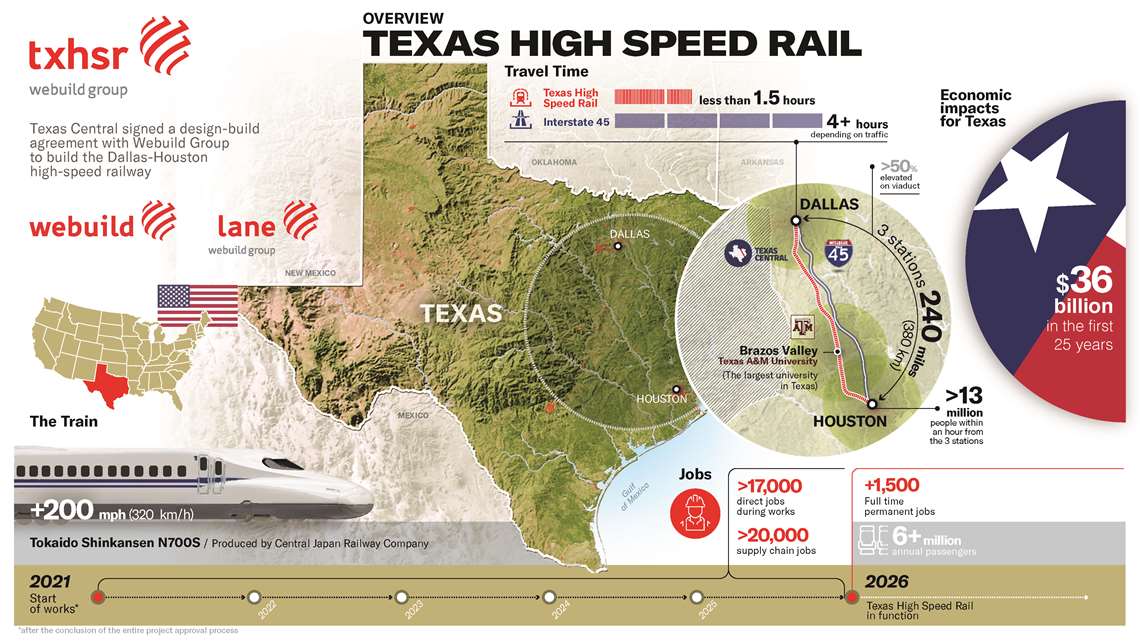 While high-speed rail has been popular for over a decade in countries like Japan, China and parts of Europe, the US has not embraced the concept. The current US Transportation Secretary, Pete Buttigieg, recently said that he wanted his country, “leading the world when it comes to access to high-speed rail.”

This goal is ambitious in the extreme. China is, by some distance, the leading country in the world when it comes to high-speed rail. The country’s state-of-the-art railway network has grown at a rapid pace. Its network has increased from 3,000km in 2009 to around 40,000km in 2020, although there are signs that the Chinese government is looking to curb new high-speed railways lines where passenger numbers are low, something that hasn’t always been the case.

While it is true that the US does have some high-speed rail plans in place, current estimates put only 33.9 miles (54.6km) of the current US passenger rail network as capable of supporting train speeds in excess of 150mph. Some of the country’s scepticism towards this mode of transport can be forgiven when placed in the context of California’s high speed rail.

Back in 2008, proponents of a high-speed rail line spanning California promised a new network, which would connect Los Angeles and San Francisco in roughly two and a half hours. It was said that it would serve as both an economic stimulus and a modern-day transformative infrastructure project. To date, the project is nearly US$40 billion over the initial price tag and no part of it is operational.

Elsewhere in the US, a high-speed rail line between Houston and Dallas will introduce Japanese bullet train technology to the US and cut the journey time between the two cities from four hours to 90 minutes.

The high-speed rail line – built by Italy-based Webuild – will replicate the Japanese Tokaido Shinkansen high-speed rail system, as operated by the Central Japan Railway Company. The US$20 billion project is currently expected to be operational in 2026. 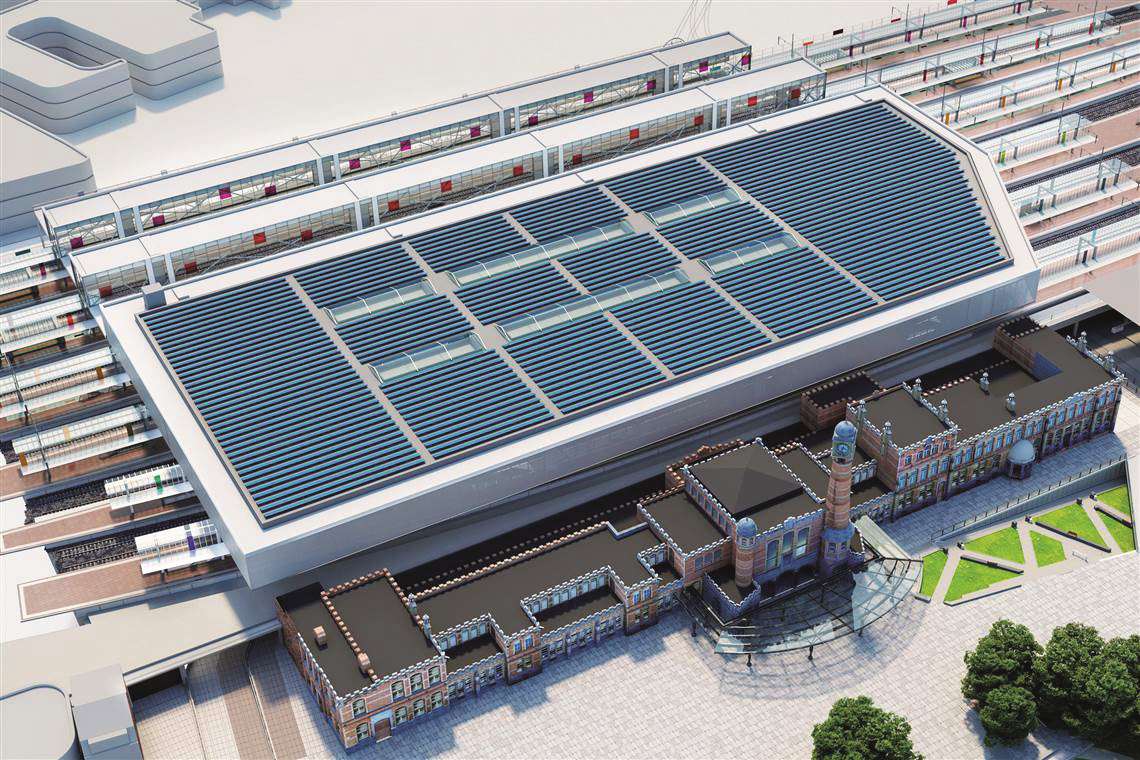 It was recently announced that the contractor Kiewit has been awarded a US$1.6 billion contract to handle core electrical systems on the line. The contract with Kiewit and affiliate Mass Electric Construction includes the installation of core electrical systems including critical safety and systems elements like Traction power, signalling and communications equipment.

The construction of the line has had to overcome a number of legal challenges, which might not be over. According to The Texan, at a congressional hearing Texas Central President and CEO Carlos Aguilar said that Texas Central is the “most shovel-ready high-speed rail project in the country.”

However, Trey Duhon, county judge for Waller County – which lies along the proposed route – urged the committee members to invest transportation dollars elsewhere and pointed out that Texas Central cannot begin “any construction or operation unless and until it submits a full application for a construction permit, which TCR has yet to file.”

The Texas Supreme Court has yet to rule on whether Texas Central has eminent domain authority to obtain needed land along the route. The 13th Texas Court of Appeals ruled in the railroad’s favour last year.

While some airport projects have been cancelled or postponed due to Covid-19, many new undertakings are pushing ahead and resurfacing and maintenance work has continued. One such job was at runway 25 at Brussels airport in Belgium – the runway is 3.3km long, 45m wide, and required a complete renovation.

The airport’s operations team knew that this work would have to be conducted quickly, accurately and safely, meaning that an all-encompassing solution would be key to the project’s success. Topcon Positioning’s intelligent milling and paving solutions was used, alongside the expertise of cold planing specialist Top-Off, which supported general contractor Willemen Infra. 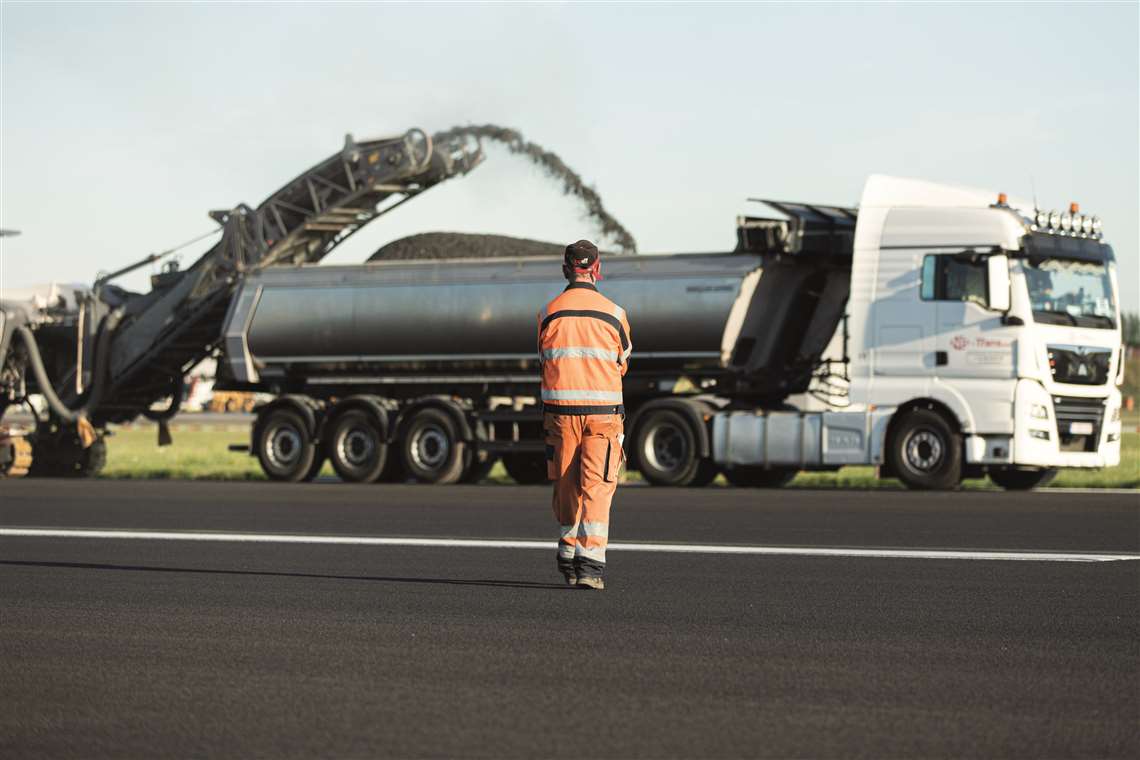 Technology helped with the renovation of a runway at Brussels airport

Phillipe Grevendonck, project development manager at Topcon, said, “The time pressure was extremely high, because the runway closure had to be kept to an absolute minimum. The quality requirements were, of course, exacting: the runway must ensure safety, and we had to extend the life of the asphalt layer by preparing a flat foundation and ensuring an optimal milling finish.”

Top-Off’s team started by milling the old asphalt layer off the runway in order to apply the new asphalt onto an optimal terrain model. Grevendonck explains, “The 3D model supplied by Brussels Airport Company ensured the best possible sub-foundation for the new asphalt layer – and if there’s one place where an even, flat layer is important, it’s on a runway.”

When it came to milling, Topcon’s solutions had a significant impact on the efficiency of the project’s turnaround, with its 3D millimeter GPS system ensuring the inevitable airport hustle and bustle was far less disruptive than it might have been. The solution combines the advantages of laser with GPS (multi-user and 3D), transmitting a 10m tall sheet of light to map a more accurate picture of the site, with a diameter of up to 600m.

Another example of technology being used in transport projects is the role that BIM (Building Information Modelling) will play in in the restoration and extension of the Gent-Sint-Pieters railway station in Ghent, Belgium. 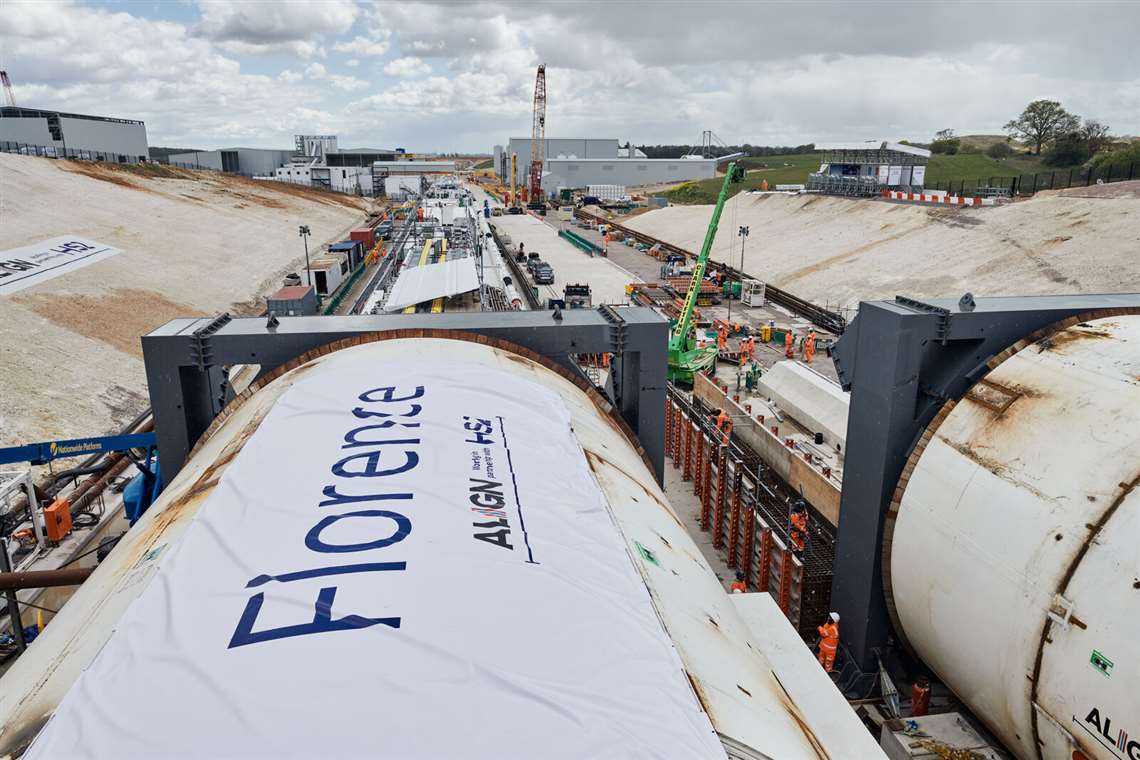 HS2 is one of Europe’s largest infrastructure projects

Eiffage is set to play a major role in the project and, along with subsidiary companies of the French contractor – Antwerpse Bouwwerken and Valens – will lead a consortium undertaking the project, on behalf of the Belgian national rail operator.

The total cost of is approximately €100 million (US$122 million). One of the most significant elements of the project is a huge new roof, which will cover seven of the station’s platforms. The contractors’ construction method will include logistical processes based on a dynamic BIM model, while building operations will need to be phased, as the station will remain operational throughout the works period.

Eiffage said the BIM model, “will provide an overview of logistical movements, such as the removal of demolition and earthwork debris or the supply of construction and raw materials, so that the construction process can be organised to keep the works’ impact to a minimum.”

Is hyperloop the next big thing?

The inception of the first working and commercially viable hyperloop system may still be some way off, but progress in this sector – which not too long ago felt like something out of science fiction – is certainly occurring.

Numerous companies are working on their own hyperloops. The system uses moving electromagnetic fields to levitate and propel vehicles within a low-pressure tube. Extremely high speeds can be achieved, due to ultra-low aerodynamic drag on the vehicle. 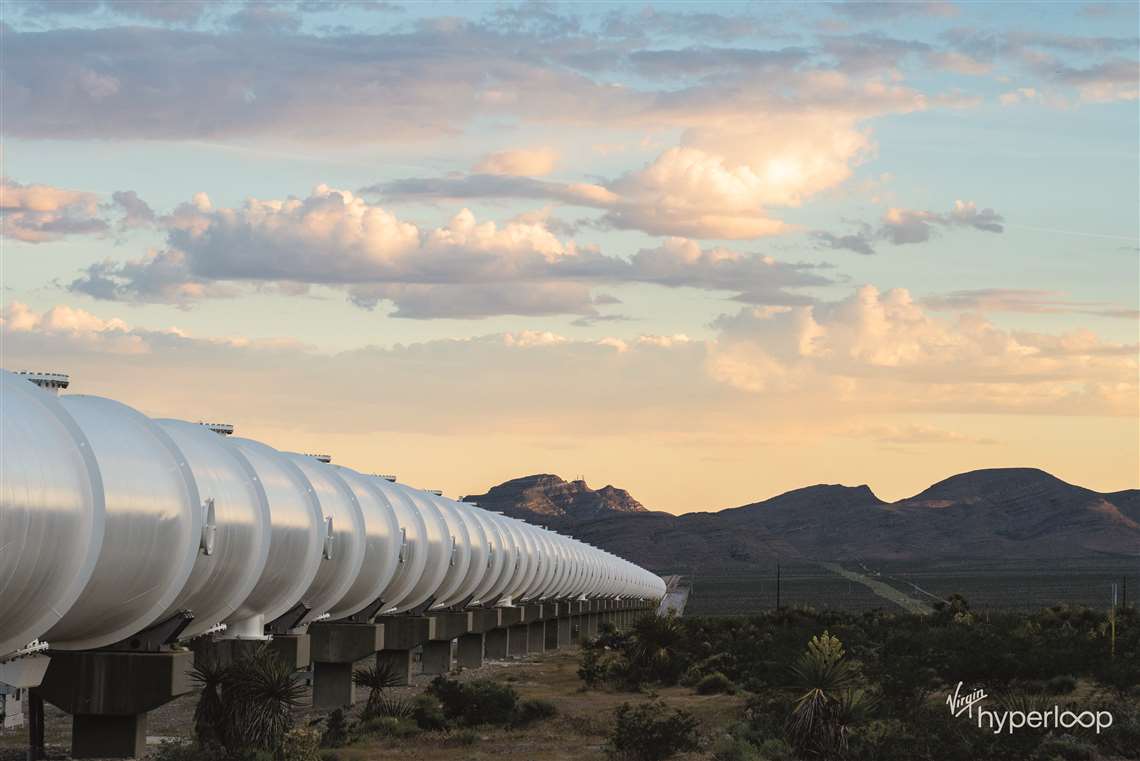 One of the leading companies is Virgin Hyperloop – last year the company announced that its global Hyperloop Certification Center will be located in the state of West Virginia, US.

Sir Richard Branson, founder of the Virgin Group, said, “The Hyperloop Certification Center is the start of the hyperloop journey for West Virginia, for the US, and for the world. We’re one step closer to making hyperloop travel a reality for people everywhere.”

Virgin Hyperloop aims to be safety certified by 2025 and begin commercial operations by 2030.

Another development in this sector occurred in 2020 when two European committees joined forces to assist in the development of standards for everything from components and infrastructure to communications related to hyperloops. The Joint Technical Committee is dedicated to the standardisation of future hyperloop systems.

The consortium of hyperloop companies comprises Hardt Hyperloop (from the Netherlands), Hyper Poland (from Poland), TransPod (from Canada), and Zeleros Hyperloop (from Spain).

It remains to be seen whether hyperloops will be a mega trend for the transport industry, but there is no doubt that the projects that will be conceived and constructed in the future will be more ambitious, environmentally friendly and packed with technology than ever before.

Costs have risen sharply for the UK’s HS2 project

Technology helped with the renovation of a runway at Brussels airport

HS2 is one of Europe's largest infrastructure projects
Previous Next ×