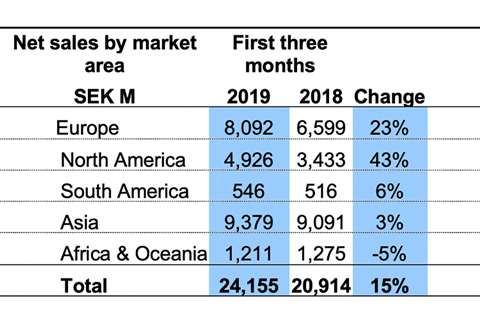 Volvo Construction Equipment (Volvo CE) has posted a 15% increase in sales and good growth profitability for the first financial quarter of 2019.

Sales increased to SEK24.1 billion (US$2.5 billion) in the first quarter.

The company said stable market conditions in most regions contributed to its success. In addition, Volvo CE said the company’s higher sales, improved prices and wide product range positively impacted its operating income, which rose to SEK3,646 million (US$381 million). This is an increase of 26% compared to the same period in 2018.

According to Volvo CE the European and North American construction equipment markets both saw growth in the first quarter, growing 3% and 4% respectively in the first two months of the year. The European market was driven by good demand from Germany, the UK and Italy, while growth in North America was boosted by growing demand for large wheeled loaders, road equipment and articulated haulers.

Melker Jernberg, Volvo CE’s president, said, “The global market for construction equipment remained good in the first quarter.” He added, “We are successfully managing these increases in volumes, and this good cost control is helping to deliver encouraging levels of operating income and operating margin.”

Volvo CE added that a recovering Brazil helped demand in South America rise by 5% during Q1, while Asia (not including China) slipped 4% compared to the same period last year. China delivered stronger demand than expected, rising 23% compared to the first quarter of 2018.