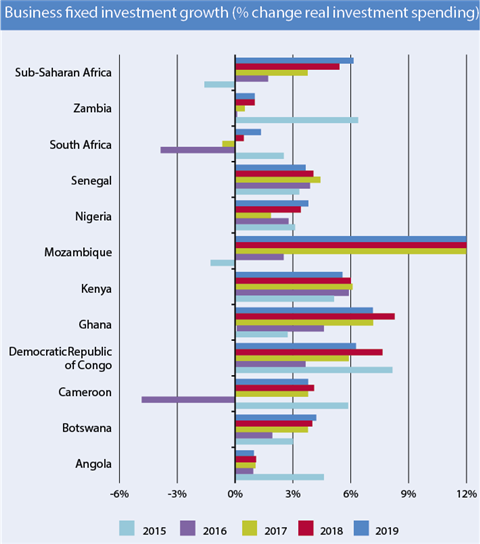 A rebound in commodity prices and stabilisation in China’s economic sector will help revive economic growth for sub-Saharan Africa. Over the next five years, the region’s construction outlook will be among the world’s strongest as recovering economic growth requires expansion of the limited existing capital stock. While 2016 was not particularly robust (1.1% real GDP growth), successive annual improvement in growth is expected through 2020, when it will rival the Middle East/North African region for the strongest growth outside of Asia (excluding Japan). The outlook calls for 2.5% growth this year, accelerating to 3.1% for 2018, 3.6% in 2019 and better than 4% for 2020 and beyond. This will require sustained construction activity, although the potential will vary by country according to policy, access to capital and natural resource endowment. Commodity export revenues have recovered from their lows, and while uncertainties remain, commodity prices should improve as the global economy gradually expands. Continued economic weakness in China will prevent any dramatic upturn in commodity prices, but a further problem for this region is that a slowing China also removes an important source of export revenues and foreign investment.

In the long run, expanding domestic markets, income gains and regional integration will support both economic growth and construction activity. Macroeconomic management continues to improve in most countries, leading to rising foreign direct investment. Growth in Africa’s middle class will create opportunities for improved housing. However, poor infrastructure (especially power generation), political instability and corruption remain obstacles to regional economic development. While economic management has improved, the legacy of large fiscal and current-account deficits remains, and regulatory policy continues to hinder growth by creating challenging business environments. Combined with the slowing pace of globalisation, the implication is that growth will return, but not at the rates seen for much of the past decade. Countries with the strongest prospects include Kenya, Mozambique, Ethiopia, Uganda, Ghana and Tanzania.

While IHS continues to expand sub-Saharan Africa coverage in its Global Construction Outlook, it remains problematic to compare many countries given the quality of reported construction data. Absent excess capacity, which is not typically an issue in emerging markets, business fixed investment correlates highly with construction spending and is a reliable proxy for comparison purposes. The table below provides this guidance.

There is not the space in this article to outline the economic prospects of all of the countries in the above chart, so we shall take a snapshot view of just four.

Ghana’s short-term growth outlook remains favorable. We expect real GDP growth to accelerate to 5.1% in 2017. Economic activity in key services sectors – trade, transport, information and telecommunications, financial services, tourism, and real estate – could receive a boost from improved domestic sentiments and the new government’s plans to implement business-friendly reforms. Industrial growth should benefit from a steady production ramp-up at the Tweneboa-Enyenra-Ntomme (TEN) oilfields. However, uncertainty prevails in the crude-oil sector, since technical problems dampening output from the Jubilee oilfield have yet to be resolved. Meanwhile, gold mining operators face several challenges, including insufficient domestic power, high production costs, and illegal mining activities. The government’s commitment to the sector’s sustainable development raises the prospect of renewed foreign investment. Ghana has pledged to address constraints to growth, including power-supply deficits, limited financing for businesses and high associated costs, the narrow tax base, and inadequate infrastructure. Business climate reforms will be ramped up to attract FDI and encourage the large Ghanaian community living abroad to invest. Ghana’s oil sector achieved a milestone with the start of production from the offshore TEN oilfields last August. TEN has the capacity to yield around 80,000 bpd at peak output. Separately, the Eni-led consortium is working to develop the Sankofa-Gye Nyame oil and gas deposits. The project aims to commence oil output in August 2017 and produce 30,000 bpd at its peak. Natural gas output is expected to start by February 2018 and yield 5.1 million m3 per day for electricity generation. Ghana’s economic growth rate could surge higher than our forecast if this development pipeline stays on track and repairs at the Jubilee field are completed ahead of schedule.

Kenya’s economic growth remains strong overall but is susceptible to several risks. The outlook for construction as well as information and communication remains solid given continued housing and infrastructure development, as well as mobile telecom. Public investment will continue to support infrastructure development, and regional integration efforts and related investment will boost Kenya’s economic prospects in the medium term. Growth prospects will hinge on key projects launched under the Northern Corridor Integration Projects framework to reduce long-standing bottlenecks. Upgrades slated to occur include railways, power connectivity, and fiber-optic broadband. Kenya’s productive capacity is expected to improve significantly over the medium-to-long term as infrastructure deficits are addressed. The construction and services sectors, especially travel, transport, and business services, remain growth drivers in the medium and longer terms. Kenya’s exports of manufactured and agricultural goods are expected to pick up under the Common Market for Eastern and Southern Africa, boosted by ongoing implementation of the East African Common Market Protocol.

Planned spending on an upgrade of Kenya’s dilapidated transportation system, including the mammoth Lamu Port and Southern Sudan-Ethiopia Transport corridor and the new Mombasa-Kampala-Kigali standard gauge railway will boost the transport sector and Kenya’s position as a regional trade hub. Greater regional integration and the continued reliance on the port of Mombasa as the main regional port will underpin growth in Kenya’s transportation sector and bolster the current account.

The Mozambican economy is expected to be one of the strongest growth performers in the region for the next decade. Mozambique’s GDP growth is expected to recover to 5.1% in 2017 and 5.9% in 2018. The GDP outlook relies on the normalisation of relations with the IMF and foreign donors to resume foreign assistance, combined with the commencement of large scale LNG projects. Private-sector investment would boom during 2017–18 if two large LNG projects in the Rovuma basin reach a final investor decision (FID) during 2017: The FID for ENI’s Coral floating LNG project is expected in early 2017, with the first commercial gas to come online in 2022. ENI’s Mamba LNG project is expected to reach a FID by mid-2017, with the first commercial LNG to be produced in 2026.