International Cranes and Specialized Transport magazine has published its 2019 list of the world’s 100 largest crane-owning companies.

The IC50 ranks companies by their IC Index, calculated as the total maximum load moment rating, in tonne-metres, of all the cranes in a company’s fleet.

A quick glance at this year’s IC50 may mislead you into thinking that not much has changed over the past year. But the numbers provide an insight into more than just this year’s industry trends.

The top 100 companies on the IC Index increased their number of employees by 2.38 per cent in 2019, which is a positive indication of how the crane companies are performing in the slowing market. 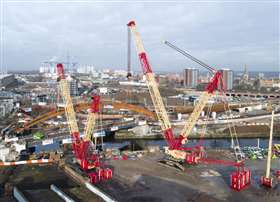 As the largest crawler crane rental company in the UK, Weldex has a fleet that offers lifting capacities from 5 tonnes to 1,350 tonnes. Operating internationally, the business offers both CPA contract lifts and CPA hire across various sectors, including civil, offshore and power generation. With a 2019 IC Index rating of 480,500, Weldex holds onto tenth position for another year.

Having increased its IC Index rating by around 65,000 tonne-metres, Deep South has risen four places and landed in ninth place on this year’s IC50. With worldwide services that range from bare crane rentals to turnkey heavy lift and heavy transport solutions, Deep South puts its 242 wheeled and 26 lattice cranes to good use. The family-run business scored a 2019 IC Index of 488,085.

Moving up the ranks from ninth place in 2018, Buckner’s 141 crawler and 12 wheeled mobile cranes give the company a 555,421 IC Index rating. During its 70-year history the company has worked on projects such as the Mercedes-Benz Stadium and the Stennis Space Center Test Stands. Operating internationally from four depots, the USA-based company also made it to number eight on American Crane & Transport magazine’s ACT100 2019. 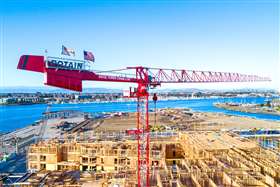 Bigge fleet includes 25 Potain towers which were ordered in 2018

With an IC Index of 593,139 and a fleet comprising 724 wheeled cranes and 224 lattice cranes, Bigge climbs up one place this year’s list. The USA-based company, which operates on a national level, has 18 depots and employs around a 1,000 people. In operation for more than 100 years, Bigge also ranked well on this year’s ACT100.

Sanghvi Movers marks a key point of separation on this year’s rankings. With an IC Index of 1,021,210 tonne-metres, the company has almost double the maximum load moment rating than that of Bigge. The India-based business, which operates a crane fleet of more than 600 units, has 28 depots in India and a staff of almost 1,500.

Another non-mover on the IC50, Lampson’s worldwide operations come down to its fleet of 389 lattice cranes and 69 wheeled mobiles. The US company’s project list includes ports, power stations and infrastructure, and this year saw Lampson’s IC Index hold steady at 1,255,693.

Taking the number four spot again this year, the US company has increased its number of branches worldwide from 52 in 2018 to 56 this year. Over the past 12 months Maxim has increased its fleet of wheeled mobile cranes from 2,650 to 2,715 units, and has also added 10 units to its crawler crane fleet, which now numbers more than 500. Marking another significant jump in the rankings of the top 10, the total maximum load moment rating of its fleet has risen from 2,167,458 in 2018 to 2,270,239 in 2019. The company also made the ranks of this year’s IC Tower Index. 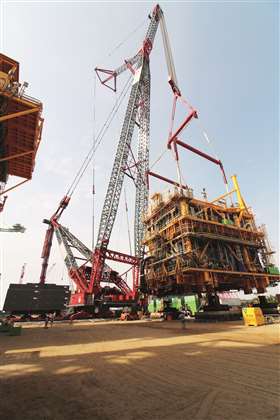 Holding on to the number three position for another year is UK-based company. Despite having half the number of staff and depots compared to its first and second place competitors, the British company’s 125 wheeled telescopic cranes and 61 lattice boom cranes equalled a 2019 IC Index rating of 2,295,623 tonnes-metre. The company also managed to rank highly on the 2019 IC Transport 50 Index. 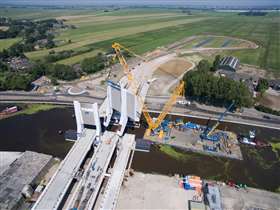 Sarens onsite at the Queen Maxima Bridge in the Netherlands

With a total maximum load moment rating of 2,850,000 tonne-metres, Mammoet is number one the 2019 IC Index - despite a slight reduction in its wheeled and crawler crane fleets. Over the past 12 months the Netherlands-based company has completed its acquisitions of both UK lifting company ALE and German lifting and assembly specialist Meyer Anlagenbau. While its acquisition of ALE is not reflected in the IC Index (the index was completed before the deal was finalised), the merging the two businesses in next year’s table could see Mammoet’s IC50 Index rise to more than 5,000,000 tonne-metres.

To gain more insight into this year’s industry trends download the full IC50 list here, or download the June issue of International Cranes and Specialized Transport. 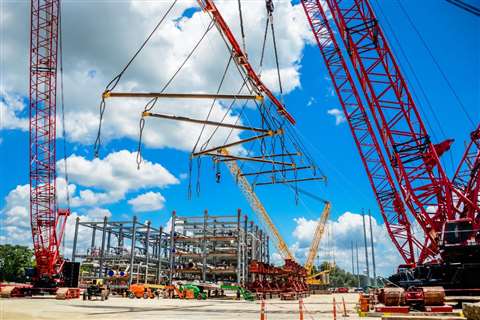 Mammoet takes the number one spot on this year’s IC50. The company has now completed its acquisition of ALE