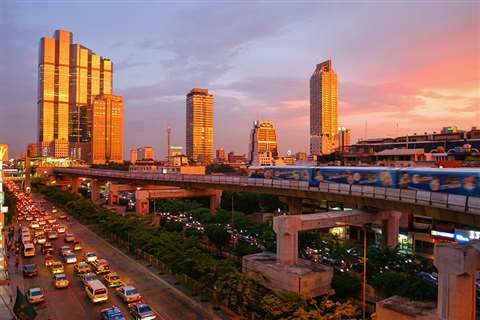 An image of Bangkok, Thailand’s capital

Thailand’s construction industry output value in real terms is expected to rise from US$23.5 billion in 2018 to US$27.9 billion in 2023, measured at constant 2017 US dollar exchange rates.

The information, from a GlobalData report, shows that Thailand’s construction output increased by 2.7% in 2018 after a decline of 2.8% in 2017.

The industry’s expansion has been – and will be – driven by the government’s efforts to develop the country’s transport infrastructure, coupled with efforts to boost the residential construction market.

Dhananjay Sharma, Analyst at GlobalData, said, “The growth of the industry during the forecast-period is expected to be supported by the government’s focus on the development of transport and energy infrastructure in the country. Under the Southern Economic Corridor project, the government plans to invest THB106.8 billion (US$3.4 billion) towards the development of 116 projects during the period of 2019–2022.

“In addition, investments under the Eastern Economic Corridor scheme to develop infrastructure in Chachoengsao, Chonburi and Rayong provinces are expected to support construction industry growth over the forecast period.”

Market output over the forecast period is expected to be supported by the ongoing urbanisation and government efforts to balance housing demand and supply through the construction of low-cost housing units.