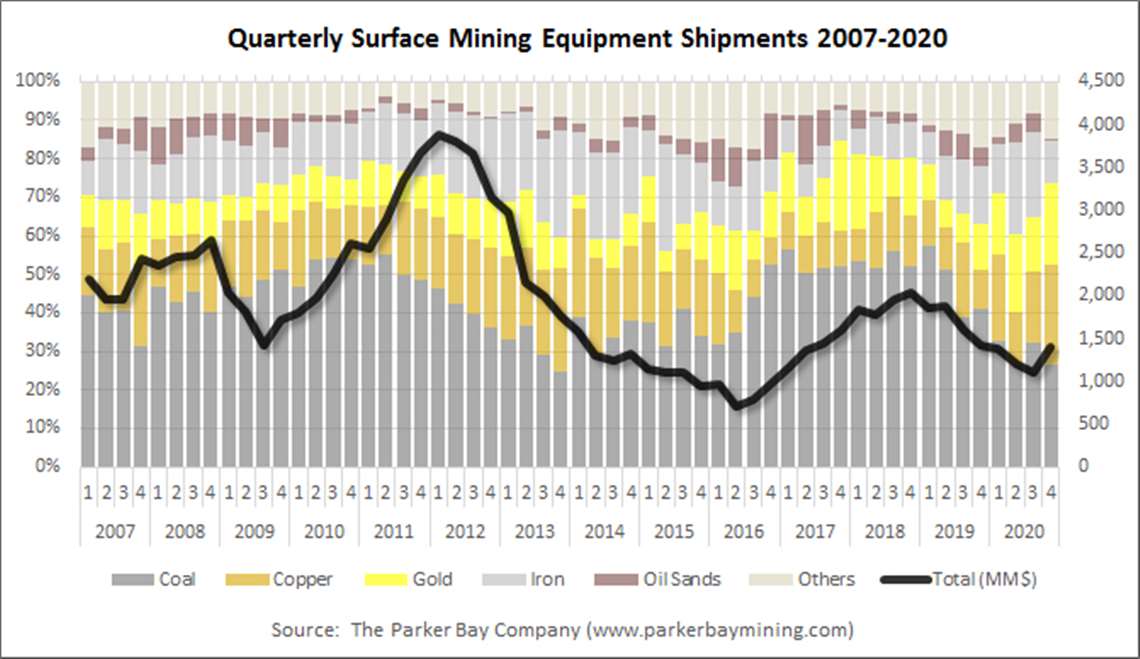 The total number of surface mining machines delivered during the fourth quarter of 2020 increased by 35% while the value of these machines was 26% higher than in the third quarter of the year, suggesting a recovery in mining equipment, according to the Parker Bay Company.

Prior to the fourth quarter of 2020 the mining industry had seen falling sales since the first quarter of 2019, with the equipment market down more than 40% over the seven quarters.

The annual total for 2020 barely topped US$5 billion, a 25% decline over 2019. In comparison, during the peak of the Super Cycle that ended in 2012, annual shipments topped US$14 billion.

Breaking down the fourth quarter shipments data by product line reveals significant differences, not all of which are indicative of longer-term trends. Mining trucks, by volume and value, accounted for 60% of the total industry deliveries – an increase of 40% from the very depressed third quarter volume, and the sharpest growth across all product lines.

They were followed by dozers (crawler/wheeled) and wheeled loaders which were both up over 30% for the quarter. In contrast, hydraulic shovel/excavator shipments declined by 10%, while highly volatile and very low volume electric shovel deliveries declined by over 60%.

Geographically, shipments to Australasian mines (predominantly Australia and Indonesia) declined by 9% during the last quarter of the year but remained the largest region for overall deliveries. This held true for full-year numbers, but the decline year on year was 20%.

Deliveries to Latin American mines doubled between Q3 and Q4. For all of 2020, shipments to the region were up 4%, a sharp contrast to the 25% annual decline globally. This can be attributed to the region’s greater dependence on relatively strong copper, gold and iron markets and a much lower dependence on very weak coal markets.

North American mines arrested what has been a very steep decline with shipments up 4%, but this only served to limit the annual decline to 44%.

The report concluded that it appears markets are recovering but it should be noted that this is a single quarterly gain, albeit a strong one. Should global economies continue to recover despite the adverse constraints imposed by the Covid-19, the mining sector is expected to improve through 2021 and beyond.