Road construction: As important as ever

When it comes to the financing behind road construction projects governments remain the major contributor, but the number of public-private partnerships (PPP) is on the increase. For example, in the US in 2018 the public sector is estimated to have spent US$92 billion dollars on highway construction, with this amount predicted to grow to US$103 billion by 2022. 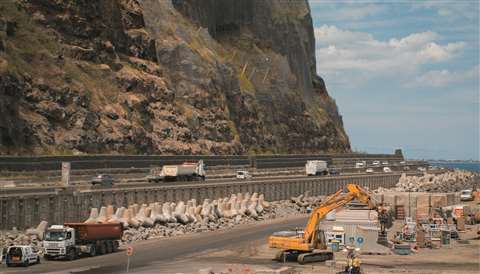 In India the office of the Prime Minister, Narendra Modi, has written to the National Highways Authority (NHAI) requesting that it ceases road construction and gives control over completed projects to the private sector.

Modi’s office wants the NHAI to manage projects auctioned on a build, operate, transfer basis. The lack of private sector interest in purchasing these roads, however, meant the government had little choice but to allow the developer to assume the full construction cost for some schemes.

In response, the chairman of the NHAI, NN Sinha, recently said that the NHAI was in a “very sound” position with a strong pipeline of projects.

India has one of the largest road networks in the world – extending the country’s road network has been one of Modi’s main targets. In a December 2018 review, the Ministry of Road Transport and Highways said more than 300 government highway projects would be completed by the end of 2019.

The government budget allocated to highways has increased every year since Modi became Prime Minister in 2014, although the rate of road building in the country is expected to slow in the future. This is partly due to the cost of land acquisitions rising, as well as an increased reluctance of public sector banks to lend to infrastructure developers. 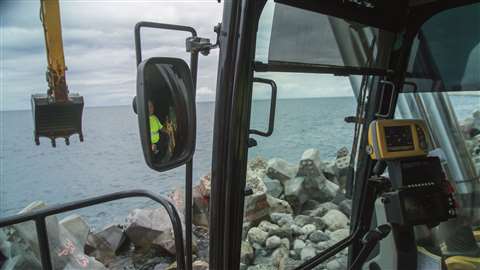 Road construction – as is the case with all aspects of the construction industry – is being changed by the development of new technology. A good example of this occurred on the remote Indian Ocean island of La Réunion which has extreme weather, dense population and a varied landscape, making for an extremely challenging backdrop for infrastructure creation.

The original coastal road connecting the island’s two main urban centres, Saint-Denis and La Possession, was located between the sea and the cliff face, making it susceptible to natural hazards such as rockslides. This, combined with high tides, frequently rendered the road impassable. In response, La Réunion’s authorities set out to create a faster and safer coastal road with help from Topcon Positioning Group.

The new coastal road is 12.5km long and positioned 80 to 300m away from shore to avoid natural hazards. It comprises three main segments: a 5.4km-long coastal viaduct and two causeways. To protect it from the open marine environment, the pre-fabricated viaduct has been designed to last 100 years and withstand exceptional shocks. It is also set 13 to 22m above the sea, beyond the reach of the highest waves. 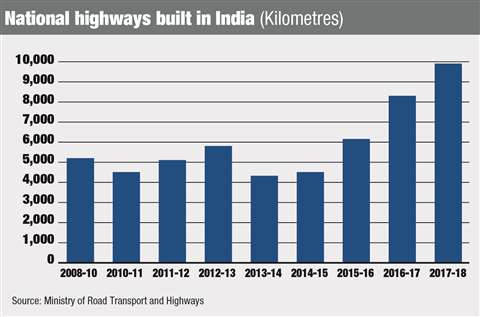 Topcon technology has been implemented at various stages of the project, including earthmoving, positioning embankment protection blocks and embedding the viaduct.

Thirty-five machines have been used on the project, all equipped with Topcon GPS devices with X-63 machine control used on excavators, eliminating over-excavation and material surpluses. Meanwhile, 3D-MC² technology was used on all dozers, allowing operators to reach final grade in fewer passes.

All aspects of the project have been managed digitally using Sitelink3D Enterprise, enabling equipped machines and survey rovers on the site to be controlled remotely, and real-time progress to be displayed and saved for future reporting. The project is on track for completion by 2020.

Digital planning, dynamic control, sustainable improvement – the demands on road construction projects are increasing all over the world. A pilot project in Stuttgart, Germany, illustrates the form that the job site of the future is expected to take. 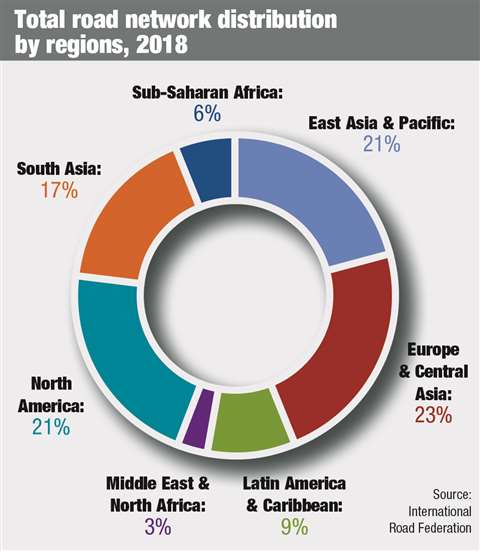 The local Ministry of Transport in Germany has introduced QSBW 4.0. This stands for ‘Quality in Road Construction in Baden-Württemberg 4.0’, a process which is set to become standard by 2021.

The objective of QSBW 4.0 is an uninterrupted and digitally controlled construction process designed to ensure excellent paving quality over the entire pavement, increasing the service life of asphalt layers.

Specifically, invitations to tender based on QSBW 4.0 criteria will require the inclusion of all the system components associated with a digitally controlled and monitored job site as defined by the QSBW 4.0 initiative. This comprises dynamic logistics and machine control, quality control and management, mobile networking, display options on smart phones, tablets or computers as well as the documentation of all data with access authorisation for clients. 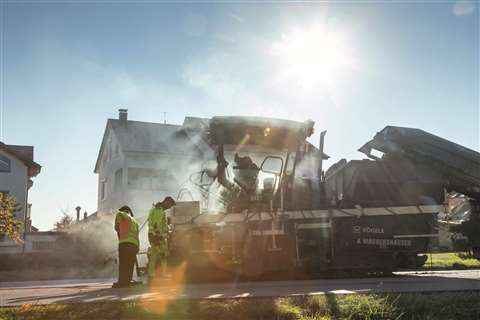 Vogele developed WITOS Paving Plus with such requirements in mind. This is a fully integrated, software-based system for process optimisation and documentation. It comprises five inter-coordinated modules for the various parties involved in the process – from the asphalt mixing plant and the lorry driver to the construction manager.

With the system, contractors can already meet virtually all the requirements affecting road pavers which will generally be specified in future invitations to tender under QSBW 4.0.

Updated handrails increase operator comfort and ease-of-use in flush cutting applications, while the new pivoting handrails stow and redeploy on the right-hand side when an obstacle comes close to the machine.

Obstacle jump is said to be easier to execute from the operator platform with new visual indicators located on the top edge of the side plates indicating where the rotor is positioned and correlate with the markings on the side plate.

Staying with new products, Mecalac’s single drum pedestrian roller, the MBR-71 – first unveiled at the Executive Hire Show in the UK – has been available since April 2019.

The all-new model has been redesigned to incorporate hydrostatic drive, bringing greater flexibility and ease of use for site workers. In addition, a series of key engineering updates to improve performance and safety have been introduced. 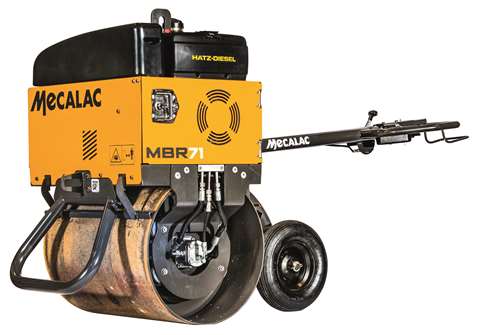 Specifically designed for the compaction of granular and asphalt materials, the MBR-71 is said to be suited to highway repair, footpaths and cycle lanes.

Moving operating controls to the handle is said by the company to ensure safer and more ergonomically-friendly operation, complementing a new ‘spring applied’ hydraulic release handbrake, which activates when pressure is lost to maximise operator safety.

At the BICES event in China, LiuGong displayed an unmanned drive roller. According to the company, as working speed is low and the working environment is normally free of interference, road compacting operations are ideal environments for automated technologies to be used.

The roller applies RTK-GNSS (Real-time Kinematic-Global Navigation Satellite System) to achieve high-precision positioning in open environments. According to the construction map and the compaction technology that will be used, the operator can setup rolling path to the roller. It can also realise automatic rolling operation, adjusting working lanes and avoiding obstacles without manual intervention. 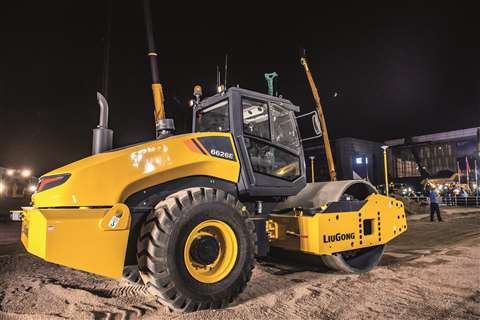 At the BICES event in China, LiuGong displayed the 6626E, an unmanned drive roller

LiuGong says that the next step is to further develop the intelligent compaction system, and realise the cooperative operation of multiple compaction equipment.

The Colombian government’s ‘4G Toll Road Concession Program’ is the largest project in Latin America for the development of road infrastructure. It involves the expansion or maintenance of approximately 7,000km of roads as well as the erection of new bridges. On the east-west route from Ibagué to Cajamarca, the company Mincivil S.A. is relying on the LB 36 drilling rig from Liebherr.

One section of the large-scale construction project is in the Andes in West Colombia. In direct proximity though are three large volcanoes. A two-lane road is being built on the 35km-long route between Ibagué and Cajamarca and will include 40 bridges made of various concrete elements.

The contractor for the project is APP GICA S.A., a group of six Colombian construction companies. One of them, Mincivil, is applying the drilling rig type LB 36 for the installation of the bridge piles in Ibagué. Using the Kelly drilling method, the machine is installing piles with diameters of 1,500mm and average depths of 30m. The number of piles varies according to the design of the bridge. Depending on the soil conditions, the LB 36 has a daily performance of 10 to 15m drilling depth.

The go-ahead for the construction project was in April 2016. According to plan, completion should be in 2024 for the project, at an estimated cost of US$578 million. 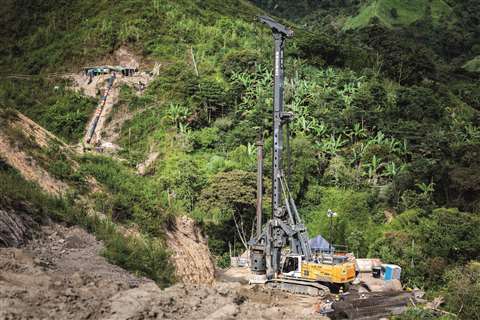 Elsewhere, work has finished on a project in England, with Seymour Civil Engineering contracted by John Sisk & Son to install highway and kerb drainage to the £75m (US$92 million) Highways England Silverlink triple decker ‘super roundabout’ in the north east of the country.

During the project, Seymour installed drainage utilising the latest shaft sinking and micro tunnelling techniques which were said to have enabled continuous traffic flow on the A19 road.

The aim of the project was to dramatically reduce queueing time for motorists travelling along the A19 at peak times. 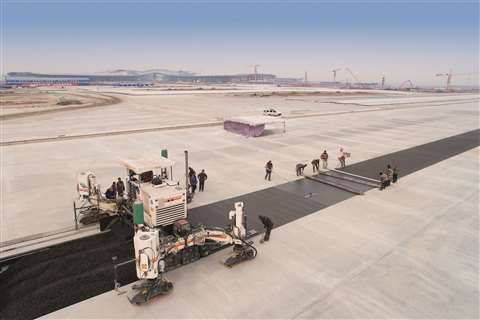 Wirtgen machines working on the airport in China

Four Wirtgen slipform pavers played an important part in the construction of the apron area for a new airport in Beijing, China.

The new airport, located 67km from the capital city, started operations on September 30, 2019 and will relieve pressure on the existing airport northeast of Beijing, currently the world’s second-largest in terms of passenger volume.

The new airport will initially serve 45 million passengers but will have a total capacity of 100 million. The concrete paving is being carried out by four Wirtgen SP 500 slipform paver units with full application support from the Wirtgen Group subsidiary in China.

Low temperatures of around 0°C during the cold winters in Beijing were one of the challenges Beijing Sino-Aero Construction Engineering had to face during the construction of the large apron area.

Minimising manpower was one of the main criteria considered by Sino-Aero Construction Engineering when choosing Wirtgen slipform pavers as the solution for automated, efficient concrete paving. Electrical vibrators emitting high-frequency vibrations ensured optimum compaction of the concrete during the slipforming process. 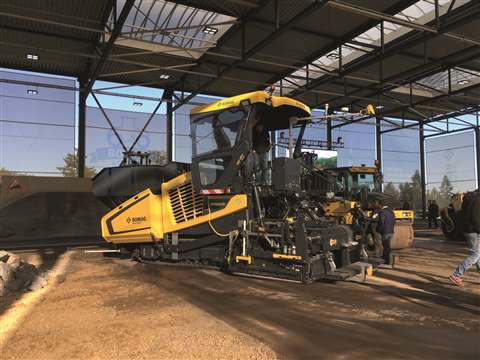 Bomag says that the Asphalt Pro app is its most comprehensive digital app for road construction. The app connects the construction site with a project’s mixing plants and trucks in real time.

By allowing users to input site planning information such as its geometry and the desired thickness of the asphalt layers, the app works out the material masses and divides the area to be paved into daily sections.

With integrated information from the mixing plants and trucks, including their location and the amount and temperature of the asphalt load, it combines the data to provide a picture of the work cycle throughout the day, allowing the status of all the trucks to be seen.

With the app system automatically updating in real-time, problems can be avoided. For example, if a truck is delayed in a traffic jam, the system automatically tells the paver to slow down. As work proceeds on a job site it compares this real-time data with the project’s expected resource use and planned schedule.

Once the job is complete, a detailed analysis assessing the efficiency of project’s processes is generated.