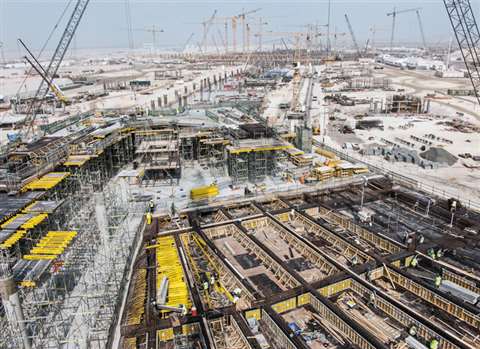 Doka has supplied huge quantities of formwork to the construction of the Midfield Terminal Complex at Abu Dhabi International Airport in the UAE.

Oil and gas are the mainstays of many economies in the Arabian Gulf. So the current oil price of less than US$ 50 per barrel, compared to around USD$ 100 two years ago, is having a big impact on the regional economy.

However, there is still enough money to drive investment in construction projects in hot-spot countries like Saudi Arabia, Qatar and the UAE, with some truly ambitious schemes underway. The current lull in the oil price is also reinforcing the region's need to diversify away from hydrocarbons and develop a broader economic base, and this too is providing some impetus to the construction sector.

An example of this is the Kingdom City development on Saudi Arabia’s Red Sea coast. Located between central Jeddah and the city’s King Abdulaziz International Airport, the 2 km2 development will include homes for 210,000 residents, as well as business premises and shops.

The centre piece is the Kingdom Tower, which at 1 km, will be the tallest building in the world upon completion – expected in 2018. For a detailed update on this scheme, see the high-rise construction feature in the September 2015 edition of International Construction.

Another major initiative in Saudi Arabia is the expansion of the national rail network. The overall master plan, which was published five years ago by the Saudi Railways Organisation (SRO) comprises 19 different projects with a total length of 9,900 km. However, three of these have risen to the top of the priority list.

The first is the so-called ‘land bridge’ linking the East coast port city of Dammam to Jeddah on the west coast, via the capital, Riyadh. This is a 950 km route, with a further 115 km spur to Jubail, which is further North along the Arabian Gulf coast from Dammam. The land bridge project is envisaged as predominately a link for freight.

Meanwhile, the 450 km Haramain high speed line will be for passenger services between the holy cities of Mecca and Medina, via Jeddah, in Western Saudi Arabia. The SAR 3.98 billion
(US$ 1.06 billion) Package 1 of Phase 1 of the project comprises the civil work along the route, and is being carried out by the Al Rajhi Alliance, a consortium led by China Railway Construction. This work began in 2009 and is due for completion by the end of the year.

The second package within Phase 1 is for construction of the four main stations. Saudi Bin Laden Group won the contracts for the Mecca and Medina stations, while Saudi Oger is building facilities in Jeddah and King Abdullah Economic City (KAEC). The highest value of these is the SAR 3.18 billion (US$ 850 million) Mecca station.

Meanwhile, the SAR 30.8 billion
(US$ 8.2 billion) contract to lay the tracks, electrify the line, install signalling and communication equipment was won at the end of 2012 by a consortium led by Al-Shoula Group, and including some 13 Spanish companies.

SRO has not announced a completion date for the entire project, but phased operation of the line is expected to begin towards the end of this year.

The final high priority rail project in Saudi Arabia is the North-South line, from the country’s northwest region to Riyadh, where it will link up with the land bridge to major ports. This line is being built to haul bauxite and phosphates from the regions where they are mined to allow them to be exported.

The region’s apparent new-found love of rail has also seen a 2,200 km super-national Gulf Cooperation Council (GCC) railway being proposed to link Kuwait, Saudi Arabia, the UAE and Oman along the coast, with spurs to Bahrain and Qatar.

Although this is not a single project as such – each GCC member state would handle the sections within its own boarders – the scheme was approved by a GCC summit meeting in 2009. Such a disparate scheme is difficult to co-ordinate, but some reports say it could be operational as soon as 2018.

But construction in the region is not all about infrastructure. There is also a vibrant building sector, which market intelligence company Timetric says represents current or planned investment of US$ 1.82 trillion across 14 countries.

The biggest slice is mixed-use residential schemes, with a total investment value of some US$ 1.47 trillion. A further major sector is the hospitality and tourism industry, where current or planned projects are valued at US$ 135 billion.

And when it comes to construction linked to hospitality and tourism, two hotspots stand out – Dubai in the UAE and Qatar.

In Dubai things are not back to the boom years prior to the global financial crisis. However, there are plenty of major eye-catching developments going up.

Not to be out-done, the neighbouring emirate of Abu Dhabi, which is the capital of the UAE, is pressing ahead with plans to increase capacity at its international airport. The main element of this is the new Midfield Terminal Complex, which will take the airport’s capacity from 27 million to 40 million per year.

The four piers will be able to accommodate up to 65 aircraft as large as an Airbus A380, and one of the suppliers helping build these monumental structures is formwork supplier Doka.

It has supplied Staxo 40 load-bearing towers to support forming of the floors, a task requiring the use of 11,000 m2 of Doka floor formwork. The lightweight shoring system was chosen for its ease of handling, quick assembly and maximum adaptability.

The solution for supporting walls and columns is Doka’s Top 50 large-area formwork Top 50, which is pre-assembled and meets all architectural requirements with respect to form, size and form-tie pattern. In addition 6,400 m2 of Frami Xlife framed formwork is in use.

In Qatar meanwhile, preparations continue ahead of the 2022 football World Cup. Although the bribery and corruption which was exposed at football’s governing body, FIFA earlier this year has called into question the manner in which Qatar won the bid to hold the tournament, preparations are progressing.

Earlier this year a consortium led by Salini Impregilo won the € 770 million (US$ 855 million) contract to build the Al Bayt stadium in Al Khor, Qatar – one of the tournament venues. The facility, some 50 km north of the capital, Doha is scheduled to be used as one of the venues for the 2022 FIFA World Cup.

And the building boom in Qatar is not just about building stadiums. There is a wide range of infrastructure construction going on in the country encompassing roads, public transport and unseen but essential services. For example, this year has seen several major contracts worth hundreds of millions of dollars awarded to update Doha’s sewer network.

The tunnel system is designed to drain-off excess water and relieve the existing pumping system used to lower the high water levels. This should save energy and costs for the public.

This all goes to show that while oil prices may be down at the moment, there is enough wealth in the Middle East and enough long-term projects in place to make it an attractive constriction market with impressive and ambitious building and infrastructure schemes.