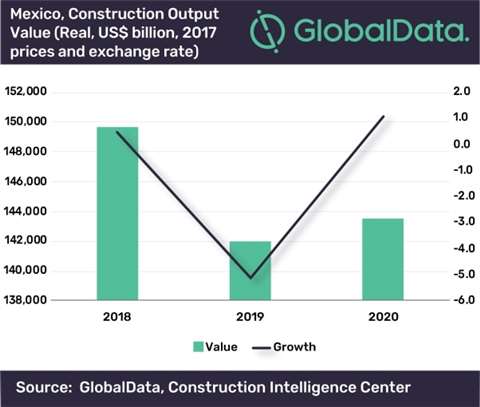 Mexico’s construction industry is forecast to recover in 2020 and grow by 1.1%, following an estimated contraction of 5.1% in 2019, according to a report from GlobalData.

This growth is expected to be driven by the government’s efforts to boost public and private investments in infrastructure.

Dariana Tani, economist at GlobalData, said, “In November 2019, the Mexican Government unveiled the first phase of its ambitious US$42 billion National Infrastructure Plan for 2020-2024 aimed at raising infrastructure investment to more than 5% a year and delivering annual economic growth of more than 4% over the coming years.

“The plan consists of 147 projects in roads, railways, airports and ports, as well as telecommunications, with most of the capital coming from the private sector.”

However, despite these ambitious plans, Tani says that uncertainty over the policies of President Andrés Manuel López Obrador – who came to office in December 2018 – will hurt investment and negatively impact industry’s growth.

Corruption is still a major problem in Mexico – according to a report by Bloomberg the government has classified the feasibility studies and contract and payment details for the new Santa Lucia airport, a Yucatan train, and other large infrastructure projects.

Like many countries around the world, Mexico’s economic growth could be negatively affected by increasing global trade tensions while a decline in oil revenues due to lower oil prices would make it harder to for the government to achieve its fiscal targets.