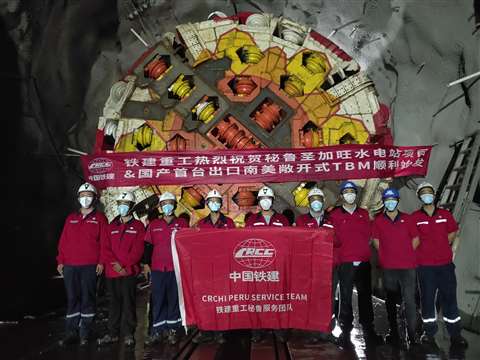 The first hard rock TBM exported to South America by China Railway Construction Heavy Industry Corporation Limited (CRCHI) is reported to have created an advance rate record of more than 1,000 meters per month in the construction of San Gawang Hydropower Project, Peru.

The San Gawang Hydropower Station is a project of the Belt and Road Initiative in South America. It is the first power project invested in by Chinese enterprises in Peru.

The total installed capacity of the San Gawang Hydropower Station is 209.3 MW, and the designed annual power generation is 1.25 billion kWh.

After the completion and operation, it will help the optimal allocation of regional water resources and sustainable economic and social development in South America.

The TBM is approximately 245m long and the cutterhead diameter is 5.83m.