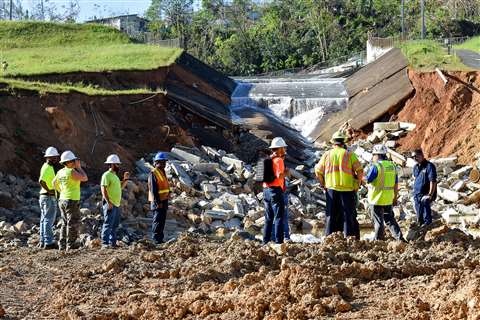 More than five months after Hurricane Maria decimated Puerto Rico, Thompson Pump and its workers are still on the island helping citizens recover from the aftermath of the worst storm in the country’s history.

Thompson Pump’s efforts helped save an entire community from a potentially catastrophic flood and provided safe drinking water to more than 200,000 people.

Hurricane Maria’s winds of more than 150 mph and 0.7m of rain left behind a path of destruction. In the aftermath of the storm, Thompson Pump was among the companies contacted to place bids on a relief contract from the US Army Corps of Engineers.

Thompson was subsequently given the go-ahead by the government agency to formulate a strategy to help save a community of residents living downstream from the Guajataca Dam.

When the dam’s spillway failed, it caused an outpouring of water resulting in major erosion that necessitated the evacuation of 70,000 area homes. During and immediately after the storm, there was a real fear they could lose the dam entirely.

“We were going into a situation with a lot of unknowns. We hadn’t seen the jobsite yet, other than in photos from the Corp and satellite images. The area was remote, with no cellphone coverage and few supplies available,” said Bobby Zitzka, national sales manager for Thompson Pump.

Ten complete systems consisting of 18” pumps, suction and discharge lines, and elbows and fittings were needed to provide relief. The process of staging this equipment and delivering it to the jobsite was an arduous one. Ultimately, due to the volume of equipment necessary to complete the job (approximately 25 truckloads of equipment and supplies, including fusion trailers, skid steers and service trucks), the decision was made that two systems would be flown over to expedite the implementation, while the rest would arrive by barge.

As Thompson Pump began the job of lowering the dam’s water level, the U.S. Army Corps of Engineers realised Thompson’s workers and equipment could be utilised for yet another vital purpose – providing drinking water for almost a quarter of a million people.