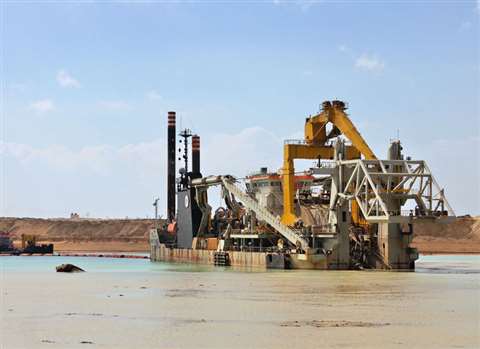 The 193 km Suez Canal is the key link in the shortest sea route between Europe and Asia. Perhaps less intuitively, it also competes with the Panama Canal for freight being transported between the East Coast of the US and Asia.

But historically it has been a bottleneck, despite a series of expansions since first opening in 1869. Although there are six passing areas and double-width sections, with a total length of 80.5 km, most of the canal is limited to one-way traffic. This has limited its capacity to an average of 49 vessels per day, and also exacerbated waiting times for ships wishing to travel against the flow on any given day.

So with the Panama Canal undergoing a vast expansion programme, and alternative routes from the Atlantic to Pacific mooted in Nicaragua and Guatemala, the Suez route has been facing the prospect of increased competitive pressure.

And then out of the blue last August, the Egyptian government announced an US$ 8.4 billion scheme to almost double the canal’s capacity by converting one of the passing areas – the Ballah Bypass – to a 35 km long channel. This would add some 37 km of double lane channel, taking the total to more than 112 km.

According to the Suez Canal Authority (SCA), this will allow up to 45 ships to use the canal at any given time without stopping, and will take the average waiting time down to below three hours from the current 11 hours. It says the aim is to increase traffic flows to an average of 97 vessels per day by 2023, up from the current 49. And that of course represents a significant revenue stream for the Egyptian Government.

Going from the announcement of the scheme to its opening in the space of little more than a year has been a breath-taking achievement. The SCA said the actual volume of material dredged was a staggering 258.8 million m3. The project may have been announced in August last year, but contracts were not awarded until October, and the first dredgers were not mobilised until November. That meant average daily production had to be around 1 million m3 per day to keep the project on track.

While one package of work was undertaken by the Egyptian Army, lots 2, 3, 4 and 5 were won by the Challenge Consortium, a grouping of the big names in the global dredging business – Boskalis Westminster, Jan De Nul and Van Oord, along with UAE-headquartered NMDC – Its contract involved the dredging of 194 million m3 of material, for which Jan De Nul alone mobilised seven cutter suction dredgers with total installed power of 106 GW. The SCA said a total of 45 dredgers were used on the project.

With the contract being awarded in late October, the consortium was faced with having to dredge an average of 1 million m3 per day.

Pieterjan Versteele, responsible for ‘dry’ equipment in Jan De Nul’s technical department explained how the work was divided up. “The area where the new canal is located was not at sea level. A dredger is always floating so anything above level zero cannot be taken away, because you need water to pump the material away.

“The land was up to 10 m above the water level. All that material had to be moved in a dry way so the dredgers could handle it. That work was undertaken by the Egyptian Army. Once that was moved to below the water level, our dredgers moved in from the sea and were able to dredge landwards,”
he said.

And not only was the pressure on the dredgers once work got underway. There was also a huge amount of work to carry out on land to make sure they could be kept up and running to tackle the high production rates involved.

Mr Versteele said, “Our land machines need to guarantee that the dredgers can work 24 hours per day. When the dredger removes material it takes it away through a pipe to a reclamation site. Our machinery needs to ensure the material is pushed-out from the reclamation area in time. That is mainly a job for dozers.

“There is a part of the pipe which is connected to the boat and floats, and there is a part which comes onto land. Every 500 m or so, you have a coupling point where the ships can connect to the land-based dredging line. Wheeled loaders and excavators are used mainly to couple and move the dredge pipe.”

Although most of the dredging work was carried out over the cooler winter months, avoiding the searing heat of an Egyptian summer, it was still a demanding task, thanks to the salt water and abrasive nature of the material.

“It is a very tough application for the equipment,” said Mr Versteele. “There is huge wear on the undercarriages. It depends on the type of sand and the abrasiveness, so at the start of the job we monitor the wear and plan to exchange the undercarriages in time. The sand we encountered was quite abrasive.

“Typically we change the undercarriage every 800 hours. If you work 24 hours per day, you get through that very quickly – every 6 weeks or so.”

And this was an area where Caterpillar and its Egyptian dealer Mantrac was able to help, as Andreas Clauss, Caterpillar’s senior account manager for the Europe, Africa & Middle East region explained.

“Jan De Nul is a global business. We sell construction equipment to Jan De Nul, but we have quite a lot of other equipment with the company, such as generators and marine propulsion systems. We have several hundred units with them.

“We follow Jan De Nul all over the world, and that is a point where the Cat global network plays a key role,” he said.

As part of this project, Mantrac supplied 400 Cat machines to the project, including excavators, wheeled loaders, articulated dump trucks, wheeled and tracked dozers, graders and skid steer loaders, along with power stations and gensets.

It also handled on-site operator training for 350 people and opened a ‘pop-up’ branch as soon as the project was underway for on-site repairs and maintenance.

It was an effort Jan De Nul appreciated, according to Mr Versteele “Caterpillar introduced Jan De Nul to Mantrac, and we were able to explain what was important to us. They have huge experience in importing spare parts on short notice, and they helped us in the start-up phase of the project.

“They supported us in monitoring the wear on the tracks, so they could plan and have the parts in stock as we needed them. They had a workshop on site, and there are some jobs like overhauling a transmission or an engine, which have to be done in a very clean area.”

All these efforts paid off, with the ‘New Suez Canal’ opening on time on August 6. A project on this scale might normally take five years or more to complete, so going from the announcement to opening in the space of a year is remarkable.