Post-Covid and sustainability: how to build a multi-billion-euro airport

An airport project cannot be taken on lightly. Constructing a multi-million (or billion) euro behemoth is complex enough before adding Covid and the need for sustainability to the mix

As the Omicron variant of the coronavirus threatens to set back air travel once more, it’s certainly an anxious time for companies with airport construction projects on their books.

It’s also a difficult time for airport owners to consider long-term multi-million or multi-billion-euro builds or expansions. Yet there are still a good number of high-profile projects going ahead.

In Serbia, the government announced plans this year to develop not one but two new international airports to bolster the existing Nikola Tesla Airport in the capital, Belgrade. 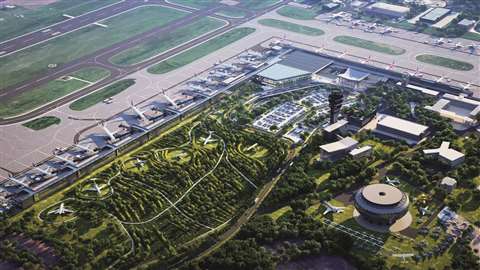 An overview of Nikola Tesla Airport in Belgrade, Serbia, showing the proposed extension to the terminal and new boarding bridges

One of the airports will be located near Dobanovci, approximately 10km west of Nikola Tesla Airport.

This airport will have an area of about 1,100 hectares and feature three runways, two passenger terminals and two freight terminals.

The second new airport, Novi Sad, will cover an area of approximately 300 hectares and be located some 15km southeast of the capital, with rail services nearby to offer freight and multimodal opportunities.

As these projects move ahead, so the Nikola Tesla Airport will expand, potentially to its fullest extent, given space restrictions.

Vinci Airports, which operates the airport, says it will complete modernisation works within three years.

With works including a 40,000m2 extension of the passenger terminal, 11 new boarding bridges and gates, plus the construction of a new runway, the ultimate goal is to create a new airport hub in South-East Europe.

Vinci says the ongoing work will enable a total capacity of 10 million annual passengers by 2023 and 15 million by 2043. Alongside this, the company aims to improve the airport’s environmental performance, with the construction of a 1MW solar park, a wastewater treatment plant and a new natural gas power plant to replace heavy fuel-oil.

With air travel still significantly down on pre-pandemic levels, it would be easy for companies like Vinci to put major projects such as this on hold. Yet, Nicolas Notebaert, CEO of Vinci Concessions and President of Vinci Airports, prefers to take a more optimistic and long-term view of the situation.

He says, “As Europe prepares for the recovery of tourism, creating a smart and sustainable new airport hub in Belgrade will support Serbia’s perspectives ahead.”

Problems for the UK aviation industry

This summer, with Covid still a huge problem for the UK aviation industry, a major extension to Terminal Two of the country’s Manchester Airport was completed, four years after breaking ground.

The £1 billion (€1.17 billion) project – the largest taking place in the north of the country – involved more than 140 businesses and contractors, including the main construction partner Laing O’Rourke, airfield works contractor Galliford Try, architects Pascall+Watson, and programme management and design consultancies Arcadis and Jacobs. 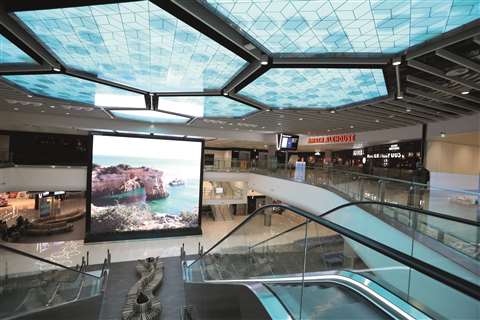 The impressive interior of Manchester Airport’s newly-extended terminal, built at a cost of almost €1 million per day

More than 8,000 tonnes of steel went into the structure of the extended terminal, which now has an area of 81,000m2.

Gareth Jacques, project director at Laing O’Rourke, said, “We’re delighted to see the new Terminal Two open at Manchester Airport. Laing O’Rourke is proud to have played a role in its construction and created a world-class piece of infrastructure that will bring significant economic benefit to the North.”

Jacques added, “Constructing a high-quality, modern airport for 30 million passengers required detailed planning so close collaboration with our supply chain and design partners was key. By harnessing our experience of digital engineering, modern methods of construction and creating an effective work environment with our engaged workforce, we were able to deliver the programme on time and within budget.”

Manchester Airport’s managing director, Karen Smart, said, “The Manchester Airport Transformation Programme is the most ambitious expansion project in the history of our airport, and we are very grateful for the hard work, dedication and ingenuity our partners have shown in helping to bring it to fruition.”

She added, “More than 1,500 jobs have been created, including 150 apprenticeships, and tens of millions of pounds have been spent in the regional supply chain. We are also immensely proud to be created an AeroZone education facility as part of the project, which will inspire young people for years to come about a career in aviation.”

What are the most complex airport projects?

These projects are by necessity large and complex and can easily run behind schedule and over budget. Things went to the extreme, however, in the case of the Berlin Brandenburg Airport, which opened at the end of last year – almost 10 years behind schedule. 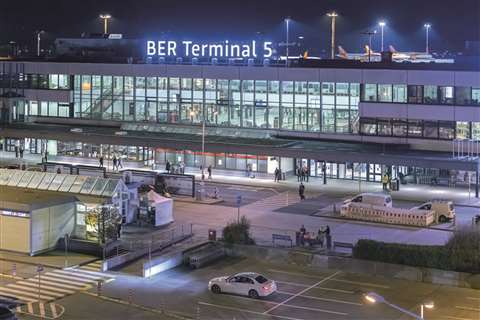 The initial proposal to build a new airport in the German capital came soon after the country’s reunification in 1991, with a decision made on the location in 1996.

Schönefeld, just south of Berlin, was selected, even though it had already flagged as an unsuitable location for an airport required to host up to 30 million passengers a year.

With the German government and the federal states of Brandenburg and Berlin as shareholders, the project moved ahead, with a ground-breaking ceremony held in September 2006 and an estimated opening date of October 2011.

Even at this stage, however, the 260,000m2 gross floor area terminal had been flagged by industry insiders as too small to meet the passenger demand. Project managers called for more work on the masterplan, but contractors were instead offered bonuses for upping the pace of construction.

Finally, a decision was taken to extend the south and main piers and add a mezzanine floor to increase capacity by 12 million passengers, up to 27 million a year.

As the original opening date approached, word leaked out about building and security technology issues, as well as flaws in the fire protection measures.

Problems continued through to 2012, when it was revealed that construction was still less than 60% completed and was riddled with some 120,000 defects, including major fire safety and structural issues. Perhaps most worryingly, 170,000km of installed cable was found to be defective.

From this point on, the project’s completion date was regularly pushed back, with project leads also coming and going on a regular basis.

Early in 2016, the developers decided a second terminal was required, and, in the same year, a 1,000-page report was published detailing errors made during the past decade of construction.

The current bill for the ongoing airport project stands at €7 billion. A further €2.3 billion could be required for the new terminal in 2030.

A happier story is playing out in Vantaa, Finland, where Helsinki Airport’s €1 billion terminal expansion and infrastructure project has been ongoing since 2014.

This month, the extended terminal 2 will open and, where the deadlines of the Berlin project were constantly pushed back, Helsinki’s work has stayed largely on track and on budget.

The project, undertaken by operator Finavia, included increasing the area of the terminal by 45% or 103,000m2, giving the new-look terminal an area of 250,000m2. 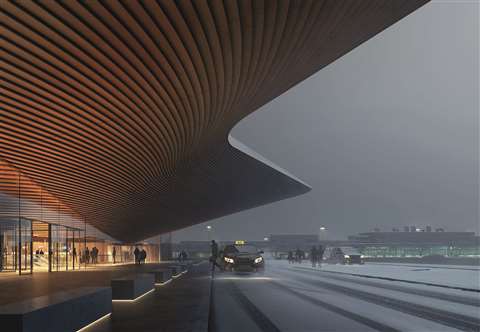 An impression of the stunning new roof, made with Finnish spruce, extending from the entrance to Helsinki Airport’s Terminal 2 building

Beyond this, the number of bridge gates was to double from 8 to 16, with a 50% increase in baggage handling and passport control capacity.

Environmental values and decarbonisation were at the heart of the planning, with the terminal 30% more energy-efficient than officially required.

Energy savings have been achieved through the good thermal insulation of the building envelope and efficient heat recovery. Smart lighting dims and turns off depending on how much natural light enters through the terminal’s windows. And in the new P1 Premium/P2 parking garage, vehicles are charged with solar power.

As well as having an architecturally stunning roof, finished in Finnish spruce, the building possesses impressive green credentials, covered with solar panels.

Earlier this year, the airport’s development programme won Project of the Year in a competition held by Project Professionals Finland.

The project’s director Martti Nurminen said, “The first three phases of the development programme have now been successfully completed, and it is gratifying to receive recognition from professionals in the project sector.”

One of the aspects of the project that most impressed the judges was the way work proceeded at the heart of an operating airport. They noted the fact that the passenger experience remained at a high level, even as construction work was carried out.

Admittedly, the coronavirus pandemic did hamper construction during 2020, with the opening of the new building rescheduled to the end of this year, but the result of the work has been generally praised, both for its aesthetic properties and the efficiency of the build.

Henri Hansson, senior vice president for technology and sustainability at Finavia, said, “The terminal, its facilities and services have been designed as a new business card for Finland. For many, Helsinki Airport is their first contact with our country. Terminal 2 is mostly Finnish high-quality work of which we can be proud.”

While there is general acknowledgement of a pent-up demand for the wholesale resumption of air flight, there is also an understanding that things will – and should – never be the same again.

Between passenger and freight flights, aviation is responsible for some 2.5% of all CO2 emissions. This figure, of course, is unlikely to be reduced by airport expansion projects. 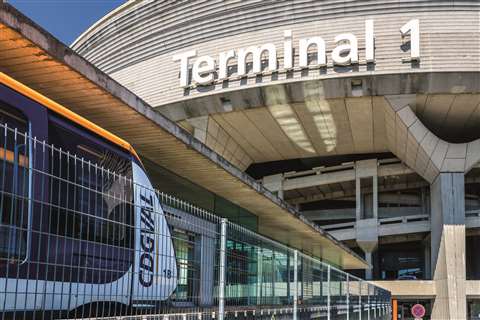 Back to the drawing board…Charles de Gaulle Airport in Paris will not be extended until a more sustainable plan can be agreed. Picture courtesy Adobe Stock Images

There is a clear need for the industry to tackle its less than spotless emissions record.

In France, following a court’s ruling that the state had failed to take sufficient measures to halt climate change, the government cancelled plans to extend Charles de Gaulle Airport in Paris with a fourth terminal, boosting its capacity by 40 million passengers a year.

She said the government had asked airport operator ADP – in which it owns a majority stake – to scrap the current project “and present a new one, more consistent with its objectives concerning climate change and the protection of the environment.

“We will always need planes,” she said, “but we must move towards a more reasonable use of air travel and reach a reduction in the sector’s greenhouse gas emissions.”