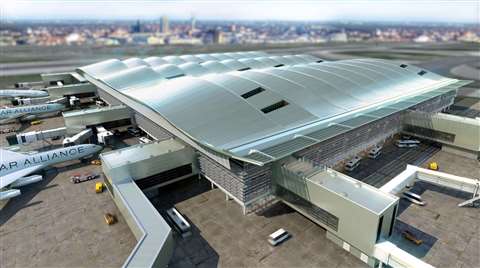 An artists' impression of the new Terminal 2 building at Heathrow airport, London, UK.

Major structural works for the first phase of the new Terminal 2 building at Heathrow airport in London, UK, have been completed.

Designed by architects Foster & Partners in joint venture with Vidal and Associates, the £2.5 billion (€2.9 billion) first phase of the project is being built by Spanish contractor Ferrovial Agroman and UK contractor Laing O'Rourke, and is due to be open to passengers in 2014. Ferrovial also has a majority stake in BAA, which owns Heathrow airport.

A topping out ceremony took place on 29 February to mark the end of major structural work on the building, which is planned to be used by 20 million passengers a year when it opens.

It will feature 1,000m2 of solar panels on the roof, while a new energy centre is also being built featuring a 12MW biomass boiler heater.

Phase 1 of the Terminal 2 project involves the construction of the main terminal building (T2A) and 12 aircraft stands on the site of the old Terminal 2 and Queen's Building at Heathrow. It will also see a new satellite terminal built called Terminal 2B, connected to T2A via an underground walkway. T2B will have 16 aircraft stands, while a 1,300 space multi-storey car park is being built.

Meanwhile, phase 2 of the project is planned for completion in 2019 and is budgeted to cost around £4.5 billion (€5.3 billion). The second phase would extend the main Terminal 2 building northwards onto the existing Terminal 1 site.

This part of the project would also include the construction of a second satellite building, T2C, which would increase the capacity of Terminal 2 from 20 million passengers a year to 30 million. Heathrow's Terminal 1 will close once phase 2 of the project is complete.

BAA chief executive Colin Matthews said, "There's a lot still to do, but the opening of Terminal 2 could move Heathrow into pole position among European hub airports and allow us to set our sights on elite airports such as Singapore, Hong Kong and Incheon in Seoul."