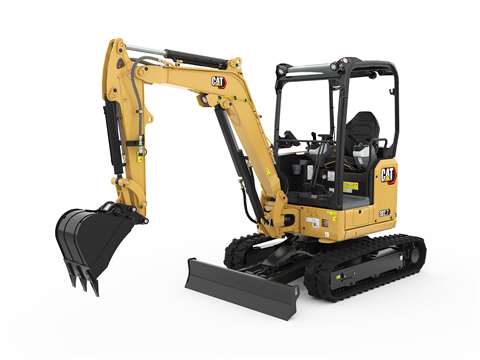 At an online event, three new CR models were introduced, ranging from 2.7 to 3.5 tonnes, as well as an 8 tonne 308 CR fixed-boom model, previously only available on the Asian market.

All models benefit from upgrade features, including stick steer, cruise control, tiltable cabs and air conditioning; Cat says its new 302.7 CR is the first excavator in this size class to boast air conditioning.

The 302.7 CR, 303 CR and 303.5 CR models will be available in Europe from around September of this year, following a combined total of around 4,500 of customer trials, as well as Cat’s own internal testing.

One of the benefits of the new models, highlighted in the trade press event, is a lower cost of ownership, driven by a number of factors, including reduced fuel usage and lower maintenance costs. 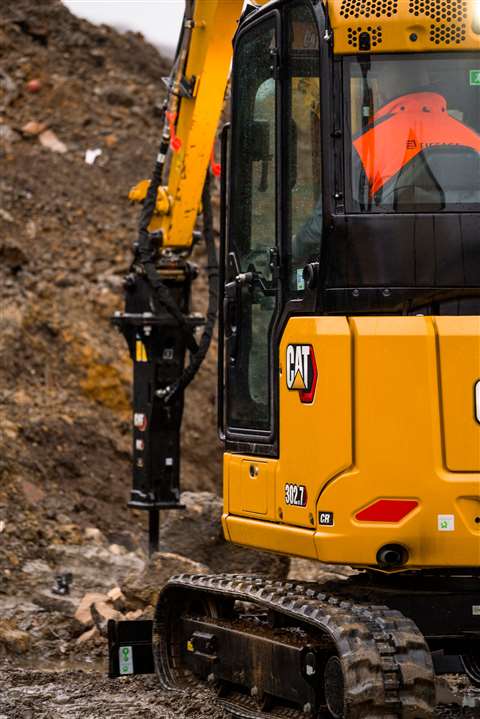 The new 302.7 CR operating with a hammer attachment

The tiltable cab was also highlighted as a significant benefit in reducing time and effort when performing essential maintenance or replacing parts.

The three new CR machines replace D and E versions, introducing a greater commonality of parts and reducing the cost of replacements for customers.

The 302.5 CR and 303 CR models have the same Cat 1.1l turbo engine, while the larger 303.5 CR carries a 1.7l naturally aspirated engine. The 308 CR fixed boom exacavator – which will not be available in Europe until the end of the year – has a 3.3l turbo engine. Engines on all models will be Stage V compliant.

Cat says the 302.7 CR is designed with owner/operators in mind, its size and weight ideal for transporation regulations within Europe, with the larger models potentially more attractive to the rental market.

Inside the cab, the common stick steer electro-hydraulic controls were highlighted as a benefit for operators, allowing them to set the machine up and operate it with different levels of response, dependent on the current application, or on the preference of the current operator.

A button on the left-hand joystick operates the cruise control function, allowing operators to easily control the machine’s travel and negating the need for fatigue-inducing foot pedal control, while undertaking complex operations with hydro-mechanical tools.

A feature specifically for the rental market is the ability to reduce the level of hydro-electric functionality, potentially preventing unnecessary adjustments by less experienced operators.

The newly-launched swing-boom excavators are compatible with multiple Cat attachments, including hammers and tiltrotators.

The 308 CR is said to be well suited to smaller demolition jobs, with its fixed boom and enhanced stability.