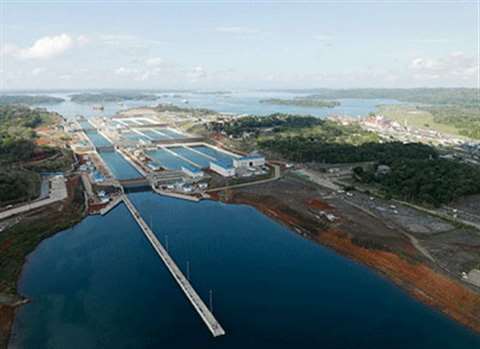 Work is underway on a deepwater port and container terminal in Panama.

The US$1 billion Margarita Island development is being undertaken by the privately-owned Chinese firm China Landbridge, which bought the port in May 2016.

The site will be renamed the Panama Colon Container Port (PCCP), and, with its location, at the Caribbean entrance to the Panama Canal, aims to benefit from the increased capacity of the expanded waterway.

The first of three construction phases on the megaport will be to increase its handling capacity to 2.5 million teu (twenty-foot equivalent) containers, as well as constructing a liquefied natural gas terminal.

At the completion of phase one, the port will have four berths with a quay length of 1.2 km and a depth of 18 m.

Later development will include the construction of a logistics park and the incorporation of additional cranes. Ultimately, the port is expected to have an 11 million teu capacity.

At this stage, it will be the world’s 13th largest container port.

Following China Landbridge’s purchase of Margarita Island, Kenneth Zhang, a representative for the PCCP, said, “We look at the project on long term and we feel pretty good with the investment. With the canal expansion, the future of Panama is bright, even though we know the maritime sector presently suffers a global crisis but we have a different reading for the future.”