Mega construction is the key to continued growth

China’s real GDP increased 6.9% year-on-year in the first quarter of 2017, supported by policy stimulus to ensure stability ahead of the 19th Party Congress. Meanwhile, policymakers are trying to reduce the high levels of leverage in the economy through tighter financial supervision and regulation.

The ongoing crackdown on excessive credit expansion will also constrain economic growth. Broad money supply (M2) growth fell to 0.6% y/y, the lowest rate since China began reporting money supply data. The liquidity growth slowdown is due to the government’s recent efforts to mitigate financial sector risks stemming from the country’s massive debt overhang. China’s overall debt ballooned from 140% of GDP at the outset of the global recession in 2008 to close to 257% of GDP currently. 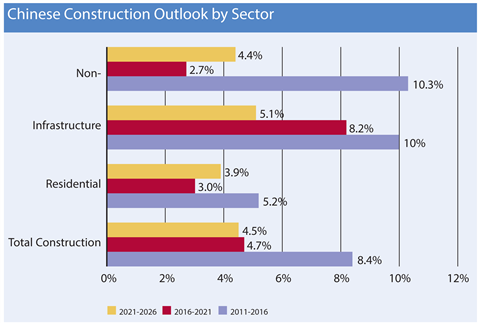 Continuing headwinds from excess industrial capacity and a housing market correction will trim real GDP growth to 6.6% in 2017 and 6.3% in 2018. A re-orientation toward a consumer-driven economy stalled in 2016 as households saved 28% of income, one of the highest saving rates in the world. The renminbi is expected to depreciate gradually against the U.S. dollar in 2017 and 2018. Capital controls may be imposed to prevent larger capital outflows. Under China’s 13th five-year plan, services will account for 70% of incremental growth over 2016-20, up from about 60% over 2011-15.

China’s economic activities from month to month in the near term will be mostly driven by the policy objectives of maintaining stable growth and reducing financial sector fragility. As these two objectives are inherently contradictory, growth stimulus will further worsen debt overhang, while financial discipline will depress investment demand and hence economic growth, the government will likely waver between these policy goals.

China’s economy in the medium term faces sizeable challenges. Export growth beyond the near-term recovery will be much more subdued than the post-World Trade Organization-entry boom years of the 2000s, as demand from China’s major markets of the United States and Western Europe will not return to their pre-crisis levels. Without improved export or consumer demand, business conditions will make it difficult to support robust growth in private investment. Moreover, should business conditions slump, even the government will find it difficult to sustain rapid state investment expansion, given that fiscal conditions will inevitably deteriorate.

The most recent evidence suggests that construction activity continues to moderate. Overall construction starts in January to April rose 9.5% y/y, down from 11.1% y/y in the first four months of 2016.

Housing starts growth remained elevated, but eased to 15.1% y/y in January to May, from 17.5% y/y in the previous month. Commercial building starts continued to decline: office starts fell 6.9% y/y in May, while retail building starts dropped 6.5% y/y. Property sales growth also moderated further in May.

New housing sales growth eased from 13.0% y/y in April to 11.9% y/y in May. Housing sales’ faster growth over starts has continued to drive down inventory. Housing inventory in May fell by another 13.0 million square meters. Overall construction starts rose 9.5% year over year through May

The chart indicates the dramatic slowing construction, particularly with non-residential structures, and the continued importance of infrastructure over the forecast.

Perhaps the most significant construction news for China was the April announcement of the Xiongan New Area. The plan would create a new city, potentially three times the size of New York City, roughly 60 miles south of Beijing with the intent of relieving some of the burden on Beijing’s overtaxed infrastructure.

While the actual scope of the project needs clarification, the announcement led to increased share prices of construction related companies. UBS has estimated that the investment could be US$580 billion. This is truly an impressive venture, although it should be observed that the buildout is likely to be twenty years. The incremental $29 billion annually will not substantially change the growth rate of a $2 trillion construction economy.

Non-residential construction spending is the weakest of the main segments, growing at 3.8% in 2016, but slowing to 2.4% growth in 2017 and 3.0% in 2018. Five year compound growth will be 2.7%. The weakest component of this segment is industrial (1.7%) as excess capacity issues weigh especially on heavy industries. Even in more growth-oriented industries, such as communications and electronics, cheaper competition elsewhere in Asia has eroded China’s market presence.

Office (3.4%) is the weakest of the non-industrial segments, but growth is solid as China becomes more service-oriented. Institutional (3.6%) also fares reasonably well, as investment continues into education and health care. Commercial (3.7%) is the strongest component by a narrow margin as consumer spending gains share of the economy.

Transportation infrastructure construction will post the highest growth rate in both years. Over the next five years, infrastructure in China faces a healthy CAGR of 8.2%. Between 2016 and 2021, energy construction (up 10.2%) is expected to see the most rapid growth, while water and sewer construction (down 2.7%) will experience the weakest growth.

In the longer run, infrastructure construction spending in China will experience a 5.1% CAGR from 2021 to 2026, driven by spending on transportation.

China continues to experience slowing growth in GDP, and this will translate into slowing construction growth. However, the country’s needs suggest that its growth phase will last a considerable time. While marginally stronger, our medium term construction outlook for China has not changed materially over the past year.

We expect somewhat larger investment in infrastructure, but to some extent, this is a policy response to what is expected to be weaker investment in residential and especially non-residential construction. China remains an attractive market with long term growth potential, but the opportunity for missteps has increased and individual project research has become even more important.