Covid-19 has caused numerous problems, many new, however this crisis has also made existing problems and weakness worse. Where there were cracks before, Covid-19 cases have blown them apart.

For many Latin American countries recovering from the economic, health and society problems of the coronavirus pandemic will not be a simple task, because the region’s problems were mounting before Covid-19 struck.

Brazil, the region’s largest nation and economy, has seen problems drag on since their 2014-2016 recession without a clear solution.

Brazil has, in the past five years, seen a growth rate of no more than 1% and a level of unemployment that stabilised at around 14%. According to data from the Brazil National Confederation of Commerce, the country saw around 36,600 factories close their doors between 2015 and 2020.

The nation’s basic interest rate has dropped to 2%, stimulating certain economic sectors, which has played a significant role in the recovery of the real estate and house building sectors. However, large-scale infrastructure is still stagnating.

Brazilian infrastructure utilises concessions model
Brazil has only vaccinated a small percentage of its population and, at the time of writing, the government has a modest amount of vaccines compared to its huge population. The Brazilian vaccination process may not be complete until 2022. 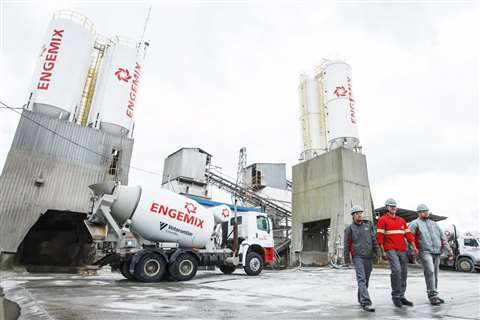 A manifesto, recently signed by 13 business associations related to the construction sector, called for more responsibility from the federal government. Among the entities that signed it are ALEC (representing equipment rental companies) and SOBRATEMA (which brings together Brazilian and international manufacturers of heavy equipment).

The document states, “What we are experiencing is an unprecedented crisis. The powers that be need to exercise their functions outside the parties, always looking at the welfare of the population in the first place.

“The pandemic has destabilized the entire country, people are afraid and immunization of everyone is essential.”

Brazil’s infrastructure has been increasingly using the concessions model, where companies and investors bid to invest in and operate long-term projects.

Investors poured almost US$10 billion into an array of projects, which included a rail line linking the Brazil east coast with the western agricultural interior and multiple road works, five ports and 22 airports.

According to the Financial Times, Brazil’s Infrastructure Minister has predicted that by the end of next year that there will be development boom of the nation’s airways, highways and railways on the back of US$50 billion in investment in concession projects.

Lima welcomes first completely underground Metro Line
One of the construction trends in the region seems to be Metro Lines. As so many main cities in Latin America countries suffer from traffic congestion, then building underground seems to make perfect sense.

Construction on Metro Line 2 is ongoing in Peru’s capital of Lima, which will be become the city’s first completely underground Line. The Lima Metro Line 2 project is one of the largest infrastructure projects ever undertaken in Peru.

It aims to ease traffic congestion in Lima, home to around 10 million inhabitants. The city boasts approximately a third of the country’s population, and just under half of the nation’s GDP.

A first section should start a trial process on September, with Metro Line 2 scheduled for completion in 2024.

MDL2, awarded the 35-year concession by Peru’s Ministry of Transport and Communications (MTC), will be under the supervision of the country’s transport infrastructure regulator.

Bogotá’s Metro Line project is geared towards 2028
After decades of studies and arguments, the Colombian capital of Bogotá awarded a contract for the building of a Metro in 2019 to a consortium.

The US5.1 billion project will be developed under the design‐finance‐build‐operate‐maintain‐transfer model (DFBOMT) to the consortium comprising Bombardier, China Harbour Engineering Company (CHEC) and Xi’an Metro Company.

With Bogotá Metro Line 1, Section 1 is a 23.96km-long elevated mass rapid transit (MRT) line to be built in the Columbia capital. It is estimated that the first Line of the Bogotá Metro will begin tests in 2027, geared towards full commercial operation in the second quarter of 2028.

Argentinian government builds up Buenos Aires
Argentina, as the second largest country in the Lation America region, is experiencing problems not too dissimilar to great rival Brazil.

The country has experienced a strong currency devaluation against the dollar, an increase in debt and a lower participation in international trade. Added to the lack of availability of international financial reserves, this results in lower growth and lower income for the population.

Argentina’s Economy Minister Martín Guzmán recently visited New York to meet with the International Monetary Fund (IMF). On the agenda was a discussion of the future program that Argentina will sign to postpone the payment of US$45,000 million that the IMF disbursed towards the Treasury between 2018 and 2019.

The brutal impact of the Covid-19 pandemic and the option taken by the government of president Alberto Fernández, to adopt highly restrictive measures on the movement of people to try and stop its spread, have heavily impacted the economy.

A 10.6% drop in GDP by 2020, the steepest decline in South America after Peru (minus 12%), has been predicted by the World Bank. The international organisation forecast for 2021 an insufficient rebound to replace the losses of only 4.9%, although the Argentina vaccination program is at least making steady progress. 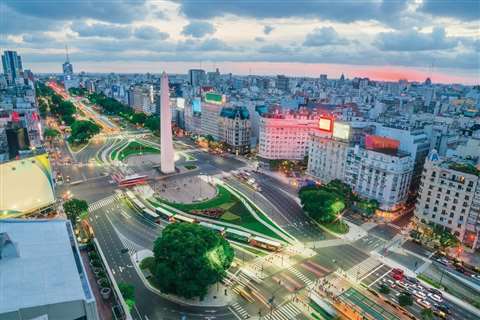 The Argentinian government is seeking to stimulate economic activity is by awarding works for housing complexes in various parts of the country. The most recent announcement of the program was the tender for the construction of 172 homes in the province of Buenos Aires at the towns Benito Juárez, Pehuajó and Tapalqué. This project alone considers a public investment of more than 730 million Argentine pesos (US$8.5 million).

Luciano Scatolini, Secretary of Territorial Development, said, “With these tenders we seek to generate housing and work for Argentines.

“On the one hand, through the construction of new developments that allow more families to access their first home. And on the other, thanks to the participation of local suppliers that have a great impact on the regional economy.”

Argentina’s road infrastructure, with the Department of National Roads maintaining work on national routes and minor highways during the Covid-19 pandemic, is another initiative connected to the construction sector.

Despite this large drop, Alberto Arango López, project manager at construction engineering company Construcciones El Cóndor in Colombia, said, “Consolidating the country as the second most attractive in terms of risk benefit in the sector, after Chile, we consider that the conditions are in place to expect positive growth, based on the interest of the government.”

Colombia’s government is investing in 4G and 5G infrastructure, and has made a commitment to economic reactivation in the regions through key infrastructure works. For instance, it has been said that the construction of transportation infrastructure in Colombia is going through one of the best moments in the country’s history due to increased public investment. There is also a focus on restarting any construction that was halted due to Covid-19.

This region has many issues to overcome, but there is no doubt the vast potential that exists within Latin America. Much depends on a successful vaccine roll out, which is currently not happening in many countries across the region, but if this does occur then Latin American countries should see strong growth in 2021.

The Latin America region accounts for only about 10 per cent of the world’s population yet around a fifth of Covid-19 cases. When it comes to Covid-19 deaths, at the time of writing, three Latin American countries lie in the top 10 worse affected nations: Brazil (2nd), Mexico (4th) and Colombia (10th).

With greater or lesser success, all countries have generated different mechanisms to overcome the situation and prevent the spread of the virus. 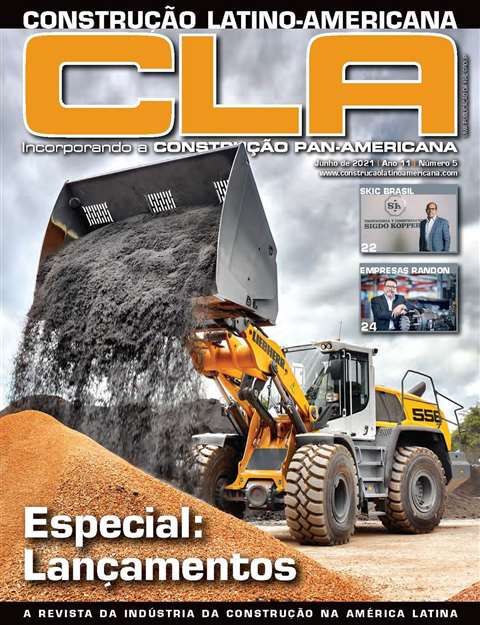 The June 2021 edition of Construction Latin America magazine
Step-by-step plan is the name given to Chile’s containment program, with a phased system ranging from confinement to the recovery of freedoms and free transit. The plan has seen both progress and setbacks, but normality is expected to return within the year.

The vast majority of economies contracted during 2020 and Latin America has another unwanted record, namely the fact that it was the most hit region in the world.

According to the World Bank, the regional economy experienced a contraction of 6.9% last year. Of the main regional markets, Peru and Argentina bear the brunt with contractions of 12% and 10.6% respectively.

The economic commission’s forecast for Latin America and the Caribbean (ECLAC) is even more daunting, calculating the drop at 7.7%. More than that, according to the entity, the region’s Gross Domestic Product (GDP) per capita level in 2020 would be equivalent to that of 2010, and the level of poverty in 2006. This would mean a decade lost in economic terms, and nearly a decade-and-a-half in social terms.

Despite the strong impact, both the World Bank and ECLCA expect growth of 3.7% in 2021, a figure very close to global average growth, which is 4%. However, the World Bank warns that if the vaccine distribution is delayed then growth could drop to only 1.9%.
South America Argentina Brazil Colombia Peru Govt & Regulatory Projects Bridges Housing Regional Restoration and Repair Transportation Construction 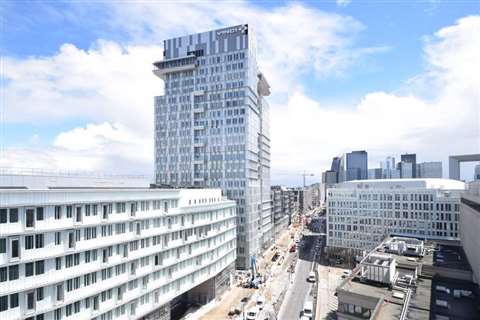 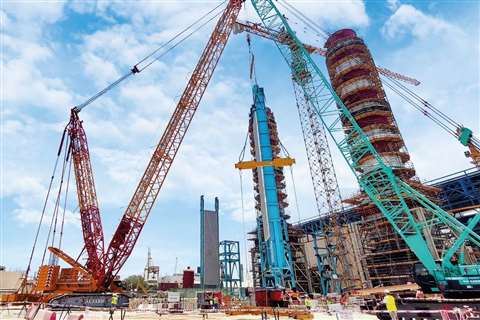 Construction 4.0 key to sustainability
Research shows how ConTech is crucial part of driving down carbon emissions 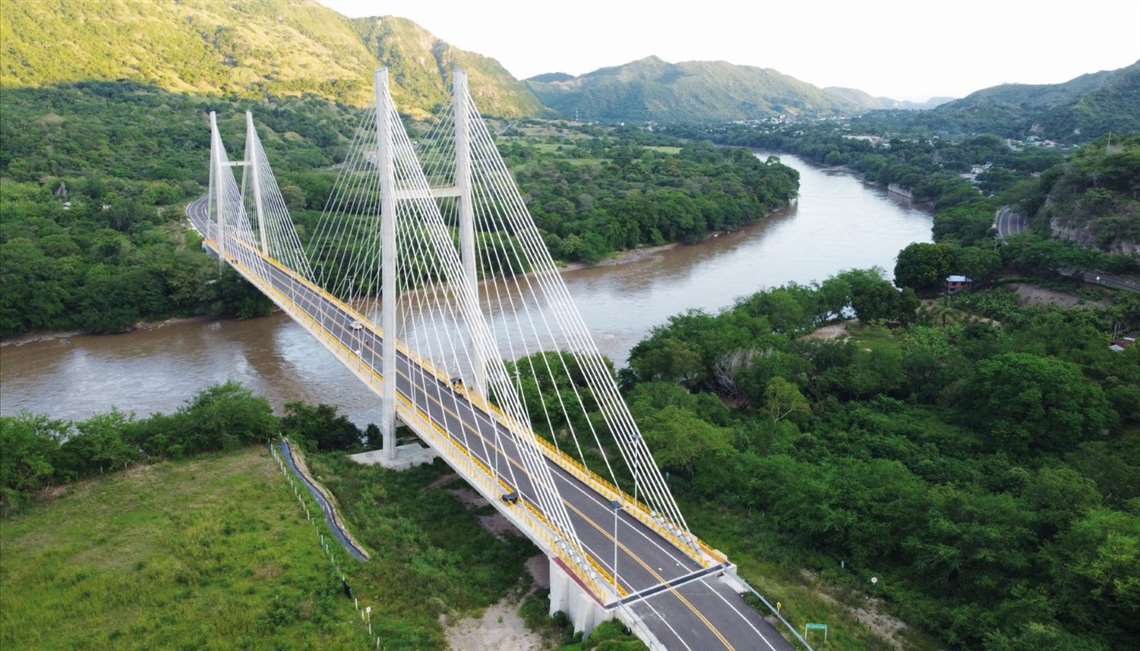 Bridge between Buenaventura and Buga in Colombia.jpg

Between Buenaventura and Buga in Colombia there are 16 tunnels, 71 bridges and a total of 41km of double track 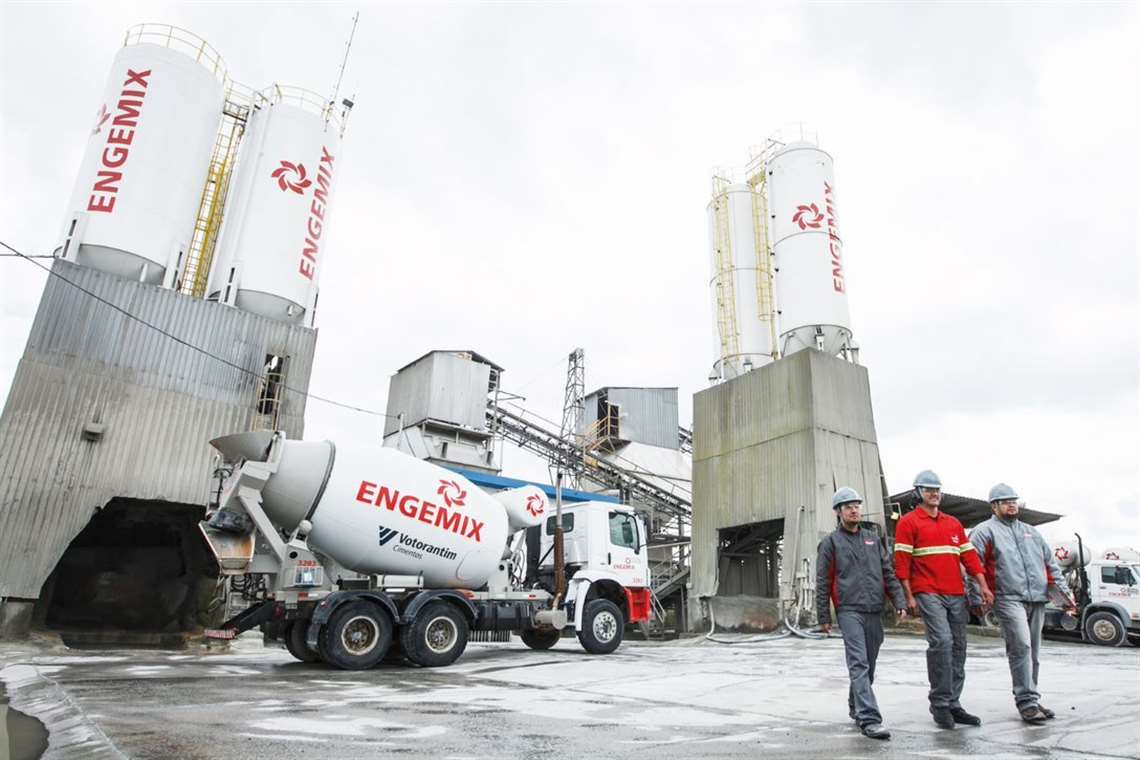 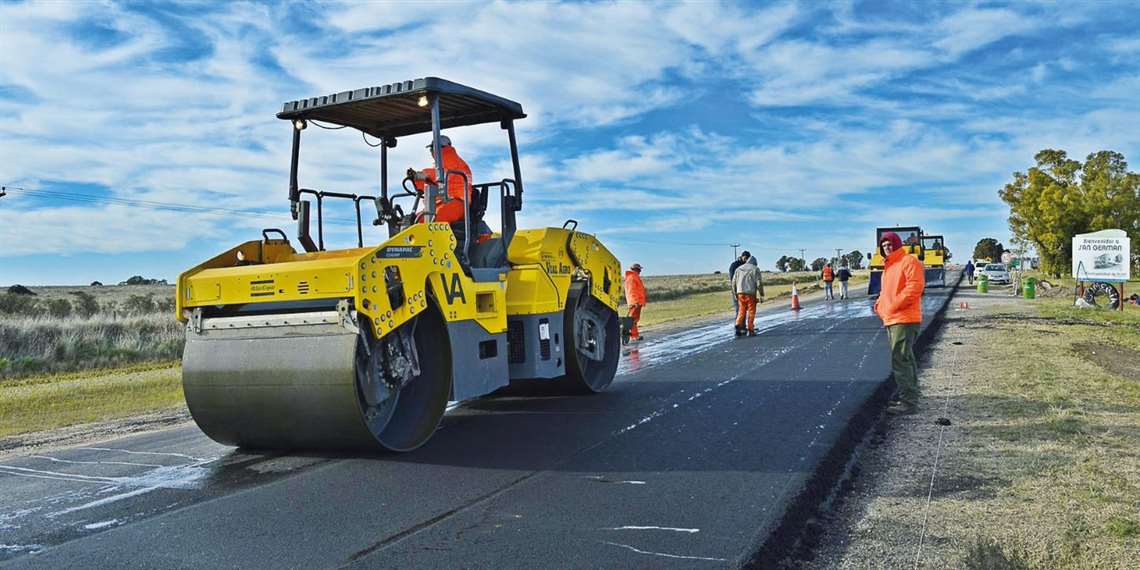 Road infrastructure is one of the Argentina government's initiatives, connected to the construction sector 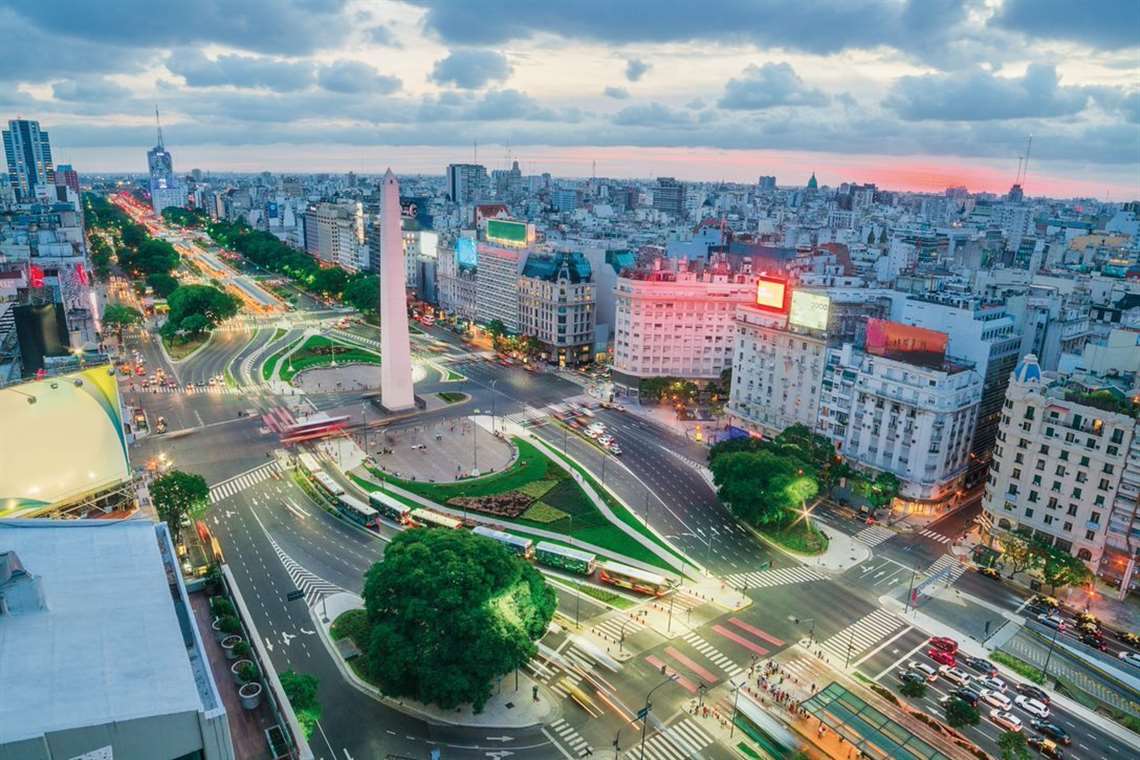 The June 2021 edition of Construction Latin America magazine
Previous Next ×