The year 2020 has been a challenge for people and business alike, but when it came to the sales of earthmoving machines for Volvo CE, the last three quarters of the year delivered a surprising upside.

“It started really shaky for us in the industry,” says Thomas Bitter, head of technology for Volvo Construction Equipment (Volvo CE). “And it finished off rather well – overall a very exceptional year. And we see a trend right now, globally, that goes in the same direction.”

Bitter says that while other industries, tourism, travel and the airlines among others, were hit hard by the pandemic and its economic consequences, Volvo CE’s earthmoving equipment sales ended in positive territory. “We had to get our supply chain under control, but on the demand side it has been very strong,” he says. “North America and the Americas, in general, have come back. Europe is on a very high level and China is booming. We were expecting something different.”

One reason is that Volvo CE’s portfolio consists primarily of earthmoving machinery with a smaller market share in some mining and quarry operations. These types of jobs are typically long term, large capital projects booked well in advance. This gives contractors and the companies that supply them some cushion from temporary economic shocks.

“I would imagine that many of our competitors are in the same situation,” says Bitter. “So overall, I think we can judge that the market has positive momentum. Having said that, we are very cautious and not predicting too far ahead.”

Problems that may disrupt the current environment include additional outbreaks of the Covid virus and disruptions in supply chains. “The whole supply chain is stretched, says Bitter. “The sea vessel traffic is very fragile right now, whereas it used to be stable and you had container availability. Right now, we don’t see that,” he says.

Lack of computer chips is another issue, Bitter says. “That’s a worldwide problem across all industries. Computer chips are used everywhere where you have some intelligence. That can be your computer, cars, trucks or construction equipment.”

Volvo CE is making sure that its dealers understand this and are prepared for a possible tightening of inventory, says Bitter. “What is crucial is that we have full transparency about the supply situation.”

Creating the technology that makes earthmoving equipment more fuel efficient and reducing emissions has been a key corporate objective of Volvo CE for decades. In 2008 the company showed its first hybrid wheel loader, and while that technology is no longer used, it yielded insights that Volvo continues to refine. The next big leap forward came in 2016 when Volvo hosted the Xploration Forum and Concept Lab to showcase a full range of futuristic concepts. 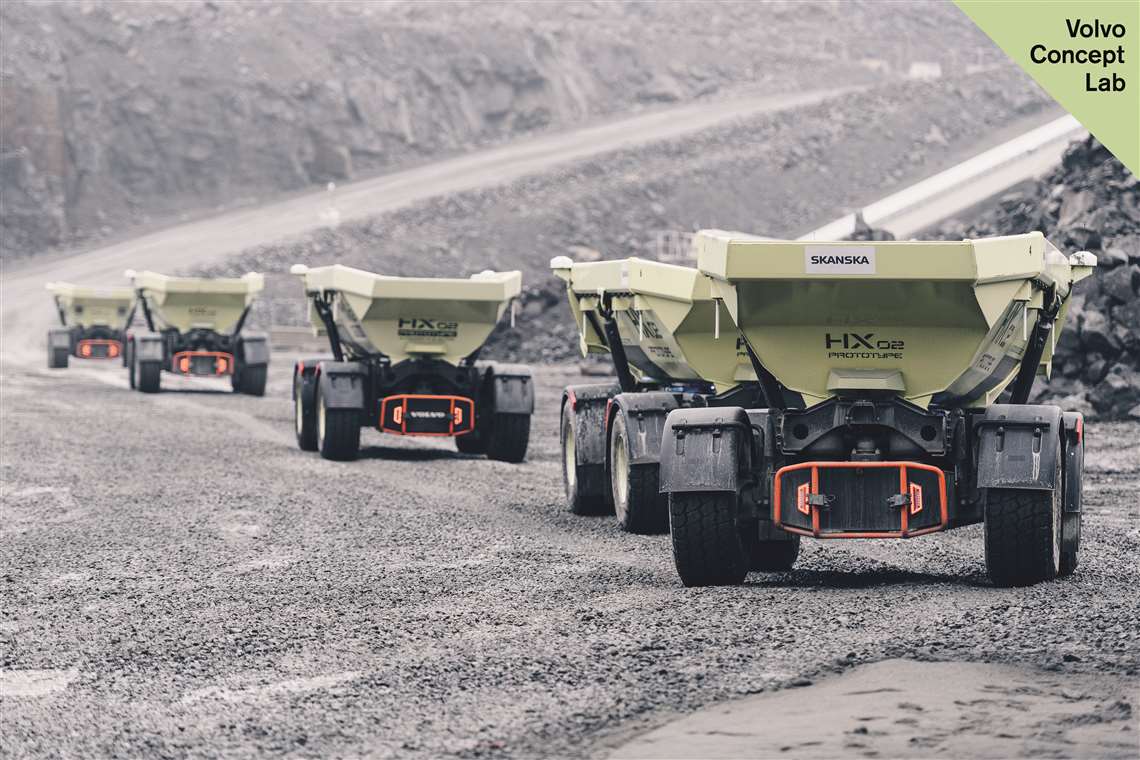 Volvo decided to share its insights with a larger community of stakeholders, creating valuable discussions with customers and potential future partners. “Since then, we have had a much more open communication strategy,” says Bitter. “In some areas it has blossomed into new businesses.”

For example, Volvo used the open communication initiative and feedback to inform the design of its Electric Site project, a solution for quarry and mining operations. That, together with advancements in autonomous solutions in other business areas, led to a new independent business unit within the Volvo Group called Volvo Autonomous Solutions to accelerate the development, commercialisation and sales of, for example, driverless and electrified haul vehicles and earthmovers.

The solutions involve a mix of autonomous machines, virtual drivers, telematics and partners that provide the fuel infrastructure, mostly electric. “The electricity can come from national or local sources,” says Bitter. “Or the customer could create their own electric infrastructure with solar panels, wind or other sources, but we haven’t seen that yet.”

In these scenarios, hydrogen shows great promise, says Bitter, and is a viable option to power earthmoving equipment. “For jobsites of a certain size in a remote location you could set up the infrastructure to create electricity that allows you to make and store hydrogen and become a self-sufficient site. “That may become a very compelling argument for certain customers,” he says.

The hydrogen could be used to recharge hydrogen fuels cells or as a replacement fuel in internal combustion engines. Someday, hydrogen storage tanks may become as commonplace as diesel fuel tanks on jobsites, he says.

The Volvo Group recently announced an agreement with Daimler to jointly work on hydrogen fuel development. “I think we will put a lot of effort and focus on that, not only for truck applications but for us on the CE side,” says Bitter. “Where the hydrogen comes from is not a part of our portfolio. But I think that hydrogen fuel stations and charging stations might become part of the shopping list for our customers.”

Outside of Volvo CE, the work being done on the battery technology – improved performance and lowered costs – fits perfectly with the future vision of the company.

Unlike trucks where the weight of the truck determines how long the battery will last, with construction equipment like excavators, more weight is not detrimental to battery performance. Working with the trucking side of the Volvo Group on battery power brings a lot of advantages to the construction side, says Bitter. “The electrification path, including trucks and busses has brought our groups close together,” he says. 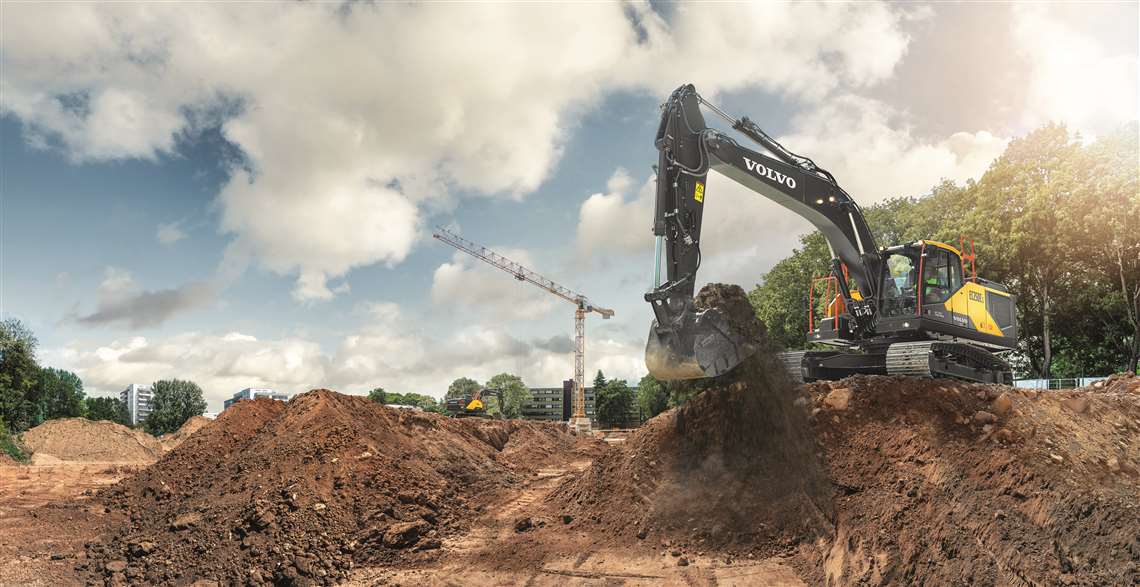 Bitter says it’s not easy to predict where this technology will flourish first. It might seem like the Scandinavians are more advanced than the south of Europe and Europe more advanced than North America. Time will tell. But China, despite its reputation as a heavy polluter may surprise us all, he says.

“China is one of the most advanced markets when it comes to electromobility, maybe not in construction equipment, but certainly in buses,” Bitter says. “That has driven a lot of localised development and suppliers for things like batteries, electric components, motors and inverters. So, I think we will see a lot of momentum coming out of China.”

Telematics will also play a big role in the future of construction equipment, says Bitter. But as with battery and sustainable technology, there needs to be close cooperation among OEMs. For example, for the value chain to work on the Electric Site, the information has to flow throughout the entire fleet and site, from excavators, to haul trucks and other production machines.

“Here I think we can play a role as an OEM in creating an open architecture. But we have to walk a very narrow path,” says Bitter. “On one hand, I think it is in the interest of all of us that our industry adopts certain standards and a more open architecture. If we are too restrictive, it will make the lives of our dealers and customers difficult. The days are over when one OEM teams up with only a subset of other manufacturers,” he says. 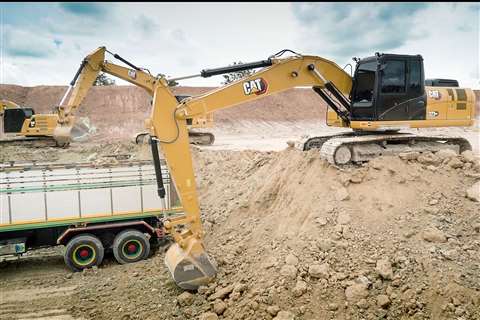 A Volvo CE excavator
Previous Next ×