Innovation and technology in drilling and foundations

Drilling and foundations are an absolutely vital – perhaps the most vital – cog in the wheel of construction projects and the sector is increasingly becoming more of an exact science thanks to the high levels of technology used.

Whether it is securing pillars for bridges, making skyscrapers earthquake proof, or shoring up the ground to allow excavation work to proceed, there is no room for error.

An example of this new technology being used in the sector occurred when a new prototype production facility being built by a well-known German car manufacturer faced difficulty when the calculated forces were reported as too high for the great weight of the building and unsuitable soil.

Liebherr’s Positioning System LIPOS was able to apply digital solutions to correct the different depths of the load-bearing gravel layer.

“The planned completion time was undercut by one week because both Liebherr piling and drilling rigs, including attachments and accessories, functioned perfectly,” said Martin Robl, CEO of Robl Spezialtiefbau GmbH.

The Liebherr Positioning System LIPOS for deep foundation machines shows the machine operator where exactly the 900 piles are to be placed.

Previously, contractors would face a time consuming process of surveying and securing the piles, whereas digital innovation is beginning to streamline this.

Now, says Liebherr, the 900 pile positions are transmitted to the Liebherr machine in a digital drilling plan displayed on the monitor in the operator’s cabin.

Liebherr says that the machine technology, supported by digital position data that is accurate to the centimetre, makes it possible for up to 80 vibrated cast-in-place piles to be completed per day by the machine.

In this case, the project was completed one week ahead of schedule and the two Liebherr piling and drilling rigs successfully installed all 900 piles.

The new compact drill rig, developed for construction and quarrying is equipped with a number of valuable features and technologies, including a computerised control system, providing the rig with a high level of technology and automation level.

“This construction drill rig will lead the way within its segment, with its optimised coverage area, outstanding terrainability, application versatility and smart control system. We are really pleased to be able to present this to the market,” says Marcus Leü, global product manager at Epiroc.

These features are matched with a rotation unit that provides 360° of feed swing and a boom geometry that enables it to drill right next to the machine. 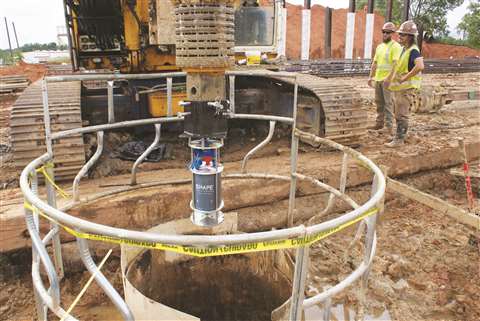 “The SmartROC T25 R offers a service friendly design. It’s extremely powerful in relation to size too, which allows for use in demanding applications in confined spaces. Fuel consumption has also been optimised,” added Leü.

SHAPE models are available to service wet or dry excavations and provide insight into the shaft’s geometry deep within the excavation.

SHAPE is completely autonomous with no electronic cabling connecting it to the surface tablet during testing. SHAPE can be advanced through the excavation at approximately one foot per second, offering simplicity in analysis with 3D profile views. PDI’s SiteLink technology allows it to be operated onsite or remotely.

Not only is new technology making the sector more accurate, but it is being used to make the equipment used more environmentally friendly.

One of the biggest projects in Europe is Britain’s HS2 high speed rail line being built from London to the North-West, with HS2 trains linking the biggest cities in Scotland with Manchester, Birmingham and London. 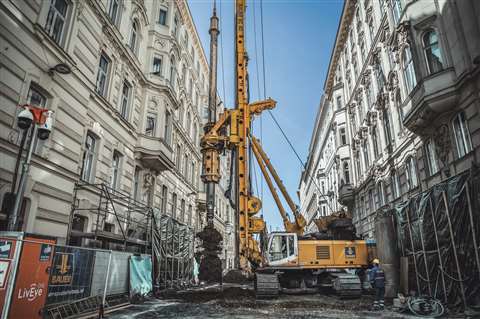 Bauer is an expert when it comes to drilling and foundations work. (Photo: Bauer)

At the same time, it reduces noise by up to 50%. In terms of performance, the rig is able to carry out exactly the same tasks as traditional machines.

This new machine is being used by BBV’s deep foundations contractor SB3, a Joint Venture between Bachy Soletanche and Balfour Beatty Ground Engineering, and works alongside a diesel-powered rig to construct large diameter piles, with the aim of demonstrating that heavy, electric powered construction equipment can perform as well as traditional machines.

Tim Laemmle from Bauer Maschinen GmbH, the rig’s developer and manufacturer, said, “It is great to be working with HS2, BBV and SB3, as the first UK specialist contractor to demonstrate the capabilities of the product. We’re fully committed to bringing emission-free equipment to the deep foundation sector.

“There is a strong desire to promote our new electrified equipment as a genuine, reliable alternative to fossil fuel driven machinery.”

The electric drilling rig replaces the diesel engine drive with a powerful electric drive. The environmental benefits include reduced exhaust and noise emissions; high energy efficiency due to a modern three-phase asynchronous motor; and flexibility through an integrated frequency converter.

Currently, Bauer is also trialling different e-connection types and a concept for set-up operation via an autonomous secondary drive, which is independent of the power supply.

Chris Merridew, SB3 JV Board Director, added, “Our team was eager to support Bauer as the first end user of the electric rig and its new technology. It has the potential to be a massive game changer for the industry and the wider construction sector in our continued drive to reduce carbon, noise and emissions.”

Another company with an eye on sustainability is Junttan, which has produced a fully battery-powered electric pile driving rig. The rig’s hydraulic system is controlled by a modern electric motor that generates power from a battery pack, which has replaced the counterweight.

Danfoss’ Editron motor helps the PMx2e mimic the operational performance of a diesel rig as closely as possible, even in the most challenging working conditions.

The Finland-based company says it worked hard to successfully replicate the efficiency and power of a diesel rig with the new machine.

The PMx2e offers the same robust structure and usability as the PMx22, but consumes less energy per pile, reduces noise, and delivers more power and instant torque.

Pasi Poranen, CEO of Junttan, said, “After four years of research and development, we are bringing the future replacement of a diesel engine deep foundation machine to the market.

PMx2e will empower our clients by massively reducing their CO2 emissions and environmental footprint.”

“It’s very important to us and to our customers to be as environmentally friendly as possible, and so we always look for machines that allow us to accomplish that,” said Anders Olsson, owner and business manager of Riggtech.

“When American Augers showed us its electric auger boring machine, the decision to invest in that machine was a simple one.”

Inrock has recently launched a brand-new pilot hole drill bit – the HDL – for HDD customers, designed in collaboration between Sandvik and Inrock, to maximise the productivity and efficiency. 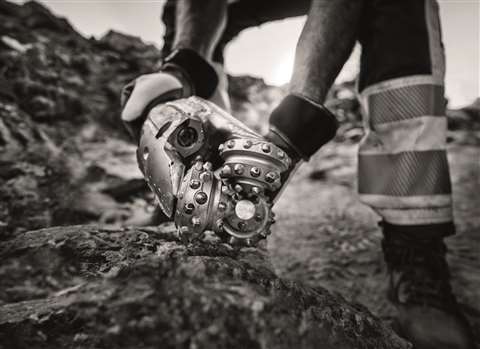 Sandvik has been a partner in supplying HDX reamer segments to Inrock for over 20 years and in 2018 Sandvik acquired Inrock – since then the relationship between the two engineering teams deepened and the free flow of ideas led to some innovative, cost-effective ideas.

“Inrock made its name in developing the toughest tools for the hardest rock and the longest HDD crossings. But building tools for these applications sometimes makes them too pricy for many applications – those bores where the rock is not the hardest or the crossing is shorter,” commnets Simon Mitchell, VP Operations, Inrock.

“We conceived this product to offer a cost-effective option to all of our customers, while still maintaining the highest quality. We combined proven technologies from Inrock and Sandvik’s product portfolios to develop a pilot bit with everything most operators need and nothing they don’t.”

Another partnership in this sector is one between Doosan and Italy-based Geax, an international leader in the design and construction of drilling machines.

Formed in 2006, Geax is the brainchild of Adriano Pesaresi, who after twenty years of experience as a designer in this sector, wanted to establish a new business with the aim of producing innovative and compact drilling machines offering very high performance, thanks to the fact that they are based on excavators.

In 2019, difficulties in procurement from regular suppliers prompted Geax to look for a new partner able to support the company globally. Geax’s choice fell on Doosan for the supply of excavators from 6 to 24 tonnes, built with Stage V, Stage IV EPA and Tier III engines, so that they can be sold in markets in Italy and Europe, the Americas and the Middle East and Asia. 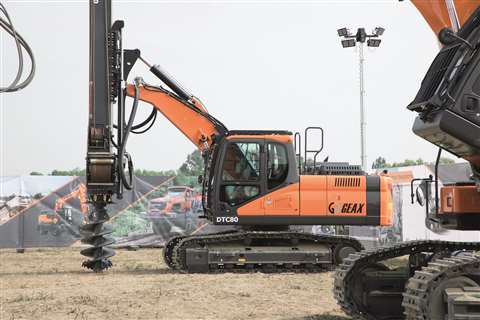 The use of Doosan excavators as the base for the drilling machines is said to have many advantages. (Photo: Doosan)

The excavators are supplied by Doosan without their booms and are transformed by Geax into drilling machines used to produce foundation piles up to 30m in depth and with diameters up to 1.5m.

These complex drilling rigs are built in Italy then re-certified and distributed by the company all over the world.

The use of Doosan excavators as the base for the drilling machines has the advantage of being able to use the engine, cab, tracks and hydraulic system that guarantees maximum reliability, strength, performance and ensures superior quality in terms of ergonomics, comfort and noise.

These compact drilling machines also offer the advantage of being able to be transported easily without special permits and can work where other machines for large diameter piles cannot work, such as in confined spaces, on slopes, inside buildings and close to power lines.

These machines have proved to be successful in big cities such as Los Angeles, Sydney and Seattle, where every centimetre has an important cost, and it is particularly profitable to carry out construction works in small spaces, avoiding wasting time and resources.

The biggest markets for Geax compact drilling machines are Italy and the US, but demand is also increasing in Australia, the UK, France, Germany and the Middle and Far East.

Geax took delivery of the first Doosan base machines in 2020, and the first completed drilling machines incorporating them were sold in 2021.

To date, about 80 Doosan-based machines have been built, of which over 60 have been purchased and delivered all over the world.