By Andy Brown and Reuters31 October 2022 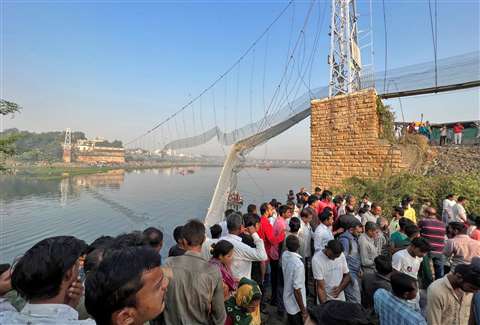 The death toll from a foot bridge collapse in India rose to 134 on Monday, including many children, as police detained nine people as part of a criminal investigation into one of the deadliest accidents in the country in the past decade, according to a press report from Reuters.

CCTV footage from just before the collapse showed a group of young men taking photos while others tried to rock the suspension bridge from side to side, before they tumbled into the river below as the cables holding it together gave way.

Police in the western state of Gujarat, where the disaster occurred, told Reuters they had detained nine people after registering a criminal case against unnamed people responsible for the renovation, maintenance and management of the bridge.

Senior police official Ashok Yadav said details of those detained people would be given later in the day.

Ashwin Mehra, who was undergoing treatment after sustaining leg and back injuries when he plunged from the bridge, said he and six others had reached the shore by holding onto the bridge’s metal railings and netting.

“Some 15-20 mischievous young kids were shaking the ropes of the bridge. Three times a noise came from the bridge before it collapsed,” he told Reuters TV partner ANI.

Local officials told Reuters the manager of the bridge, a company making clocks and electrical items, had not informed the authorities that the bridge would be reopened last week after repairs, adding that no certificate that it was fit for public use had been issued.

The colonial-era footbridge over the Machchhu River in the centre of Morbi town was packed with sightseers enjoying holiday festivities when it collapsed on Sunday evening, plunging people about 10 metres (33 feet) into the river.

Some 400 people had bought tickets to get onto the bridge to celebrate the Diwali and Chhath Puja festivals.

About 35 victims were under 14, according to a list of the deceased seen by Reuters. About 170 people had been rescued by the morning.

“People were hanging from the bridge after the accident, but they slipped and fell into the river when it collapsed,” said Raju, an witness who gave only one name. “I could not sleep the entire night as I had helped in the rescue operation. I brought a lot of children to the hospital.”

Narendrasinh Jadeja, whose friend lost seven members of his family, including four children, said: “I cannot express how angry and helpless I am feeling.”

Senior government official NK Muchhar said the death toll had gone up to 134. Another official said at the site that the river’s muddy waters were hampering rescue work and that there might be people trapped under the remains of the bridge. 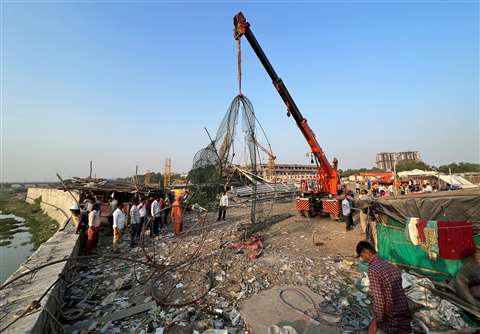 Gujarat-based electrical appliances maker Oreva group, known for its Ajanta clocks, had been in charge of maintaining the bridge for 15 years, said Sandeepsinh Zala, the chief officer of Morbi municipality.

“They did not give us any information that they were reopening the bridge,” Zala said. “We have not issued any fitness certificate to them.”

The bridge was previously maintained by the local municipality, which limited the number of people on the bridge at one time to 20, he said. An Oreva spokesperson did not answer calls and text messages from Reuters.

The Indian Express newspaper quoted an Oreva spokesperson as saying: “While we are waiting for more information, prima facie, the bridge collapsed as too many people in the mid-section of the bridge were trying to sway it from one way to the other.”

Prime Minister Modi, the former chief minister of Gujarat, expressed his condolences to the victims’ families and is expected to visit Morbi on Tuesday. “In this hour of grief, the government is with the bereaved families in every manner,” he said at an event in Gujarat.

The bridge is 1.25 metres (4 feet) wide and spans 233 metres (255 yards), connecting the Darbargadh Palace heritage hotel and the town. It was built in 1877 when India was a British colony.

Opposition politicians in Gujarat, where elections are due by early next year, said the disaster exposed the lack of oversight of infrastructure in the country.

“Not just extremely sad on bridge collapse in Morbi but also very angry. Because it was a tragedy in waiting,” Gurdeep Singh Sappal, a member of the Congress party, wrote on Twitter. “For some time now, bridge collapse, roads caving-in, dams breaching are happening quite often.”