How to reduce carbon emissions from construction materials

As policy makers scramble to avoid a climate crisis, pressure is mounting to switch to “low carbon” alternatives for cement and steel. Lucy Barnard finds out how.

Standing as a long grey-white line against the golden sand and the blue sea, the new sea wall at Dawlish on the UK’s South Devon coast has an important job to do.

The 775m marine defence is being built by railway company Network Rail along a vulnerable stretch of coastline, after a previous wall was devastated by a storm. 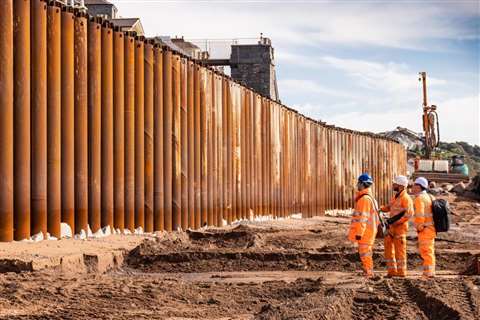 Built 2.5m taller than the previous wall, Network Rail and contractors BAM Nuttall promise that the new barrier will not only safeguard the vital rail link, but, by using alternative materials, it will also reduce carbon emissions from construction and attempt to help prevent sea levels across the globe rising.

Rather than being built of traditional concrete, a material responsible for producing 7% of global carbon emissions, the new wall is being built using a low carbon alternative.

Jack Brookes, site agent at BAM Nuttall, says that slag from blast furnaces in Port Talbot, South Wales, has been used by manufacturer Hanson instead of cement to make the 9,100m3 of concrete poured behind the wall’s prefabricated facing panels, saving 1,130 tonnes of carbon dioxide from entering the atmosphere.

The environmental imact of the Dalish sea wall

“From the earliest phase of this project, we have considered how this scheme can limit its environmental impact without compromising the strength and resilience of the structure,” he says.

“We identified low carbon concrete as an innovative product that could help us to reduce our carbon impact by two-thirds while retaining the strength of traditional concrete.” 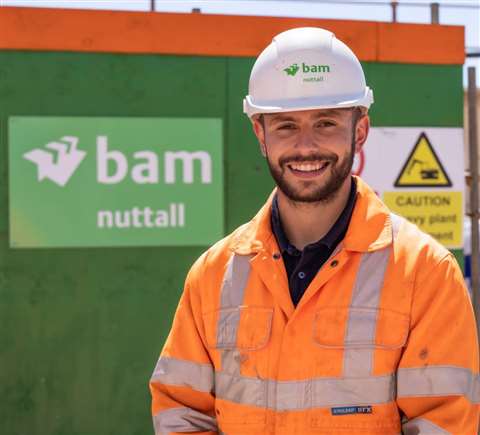 Cutting so-called “embodied carbon” in buildings and infrastructure is becoming a more and more important issue around the world as countries attempt to avoid a climate crisis and reduce their carbon emissions in line with the Paris Climate Accord.

How much carbon does the construction sector produce?

According to the World Green Building Council, building and construction together are responsible for 39% of all carbon emissions in the world.

A report by C40, a coalition of 96 of the world’s biggest cities, estimated that emissions from making the cement, steel and rubber used in construction make up 60% of a building’s total emissions.

It calculated that by switching to greener versions and improving efficiency, lifetime emissions for buildings can be slashed 44% by 2050.

So far, most governments have focussed on making buildings more energy efficient once they are occupied.

But, as policymakers scrutinise the construction industry as a major source of pollution, they are beginning to look more seriously at the amount of carbon which is emitted in getting them built in the first place – especially the energy used to extract the raw materials and manufacturing components used in them.

Cement is easily one of the worst offenders because it is used so ubiquitously.

How much CO2 is produced in cement manufacturing?

Imperial College London estimates that the world produces around 3.5 billion tonnes of ordinary Portland cement annually, emitting 2.8 billion tonnes of carbon dioxide – only slightly less than the total amount of emissions produced by China and the USA (see box story below). 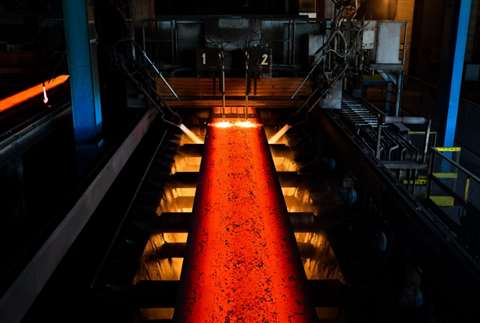 A steel slab being manufactured in Brazil - photo ©WorldSteel.org

Steel too is another of the most polluting materials on earth, accounting for around 8% of global carbon dioxide emissions according to the World Steel Association.

How can manufacturers reduce carbon emissions?

In order to reduce their environmental impact, manufacturers are investing billions of dollars in lower carbon alternatives.

Initiatives from cement manufacturers include Swiss-based LafargeHolcim, which says it is scaling up the use of calcined clay and developing novel cements with new binders as part of its commitment to a 20% reduction in its CO2 intensity by 2030.

Australian firm Wagners Holding Co which is producing its own novel cement version, branded “Earth Friendly Concrete”, and Mexico-based manufacturer Cemex says it has introduced new types of clinker, which reduce emissions by up to 30% in some of its cement works.

Materials company DB Group uses pozzolanic materials such as ground granulated blast-furnace slag from steel mills or pulverised fly ash from power stations to make its concrete, which it claims produces concrete with up to 80% less embodied carbon than ordinary Portland cement.

“Cement free concrete is a pioneering technology which will transform the construction industry, similar to the patent of Ordinary Portland Cement in 1824. It’s essential that we trial this innovative solution in order to deploy it at scale,” says Peter Goring, Technical Director for Mace Tech.

“Our work in developing cement free concrete cassettes is a major leap forward in Mace’s journey to pursue a sustainable world.”

Carbon emissions from cement and steel

Cement, which makes up around 10-15% of concrete is made through a carbon-intensive process in which limestone is heated to 1,450 degrees Celsius in order to separate calcium oxide from carbon dioxide.

The International Energy Agency estimates that cement is responsible for about 7% of the world’s carbon emissions.  According to the Global Concrete & Cement Association, each ton of cement produces about half a ton of CO2.

The World Steel Association calculates that steel manufacture is responsible for around 8% of carbon dioxide emissions and that for every ton of steel produced, 1.85 tons of CO2 is emitted. Steel manufacturing produces carbon dioxide at a number of stages but the most significant is when iron is extracted from its ore in a blast furnace which is heated to more than 1,000 degrees Celsius.

Steel manufacturers are also looking at ways to reduce their carbon footprints by capturing and using the carbon dioxide created while steel is made, using hydrogen instead of coal to purify iron ore, or using electrolysis to turn iron ore into steel.

Another solution is finding ways to use less steel or other materials such as laminated wood.

So far professional bodies, including the Institution of Structural Engineers and the Chartered Institution of Building Services Engineers, have put together guidance on ways to assess embodied carbon - which can include finding ways to reduce the amount of cement in construction or using cement-free alternatives.

Governments around the world too are looking at ways to limit the amount of carbon used in the construction of buildings.

Embodied carbon emissions have been limited in The Netherlands since 2018. Denmark, Sweden, France and Finland are planning to introduce limits between 2023 and 2027.

In the UK, the new London Plan will require an assessment of some whole life cycle carbon emissions in the British capital. And in the US, California, Minnesota and Oregon have introduced state-level carbon requirements.

What are the disadvantages of low carbon construction materials?

But engineers point out that, despite these advances, low carbon building materials are often more expensive than their carbon-intensive alternatives, harder to get hold of and, sometimes it is harder to get approval to use them.

“It can be challenging to secure the supply of low carbon materials, products and plants on the scale needed for some larger projects, at the locations they are needed,” says Lynsey Clark, director of sustainability at Jacobs.

“Although decarbonisation overall can align to efficiencies or savings, some low carbon options and materials can come at a premium price and alignment to a fixed capital budget can be in conflict to whole life benefit.” 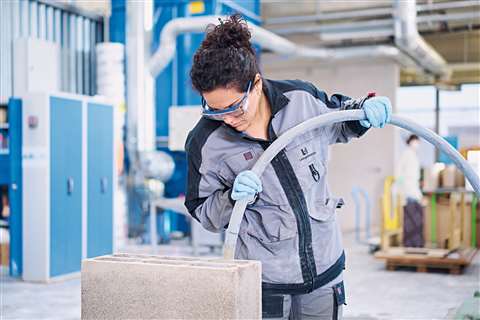 “While many delivery bodies are demanding innovation in approach, when it comes to the crunch, the same delivery bodies can be reluctant to incorporate innovative materials or new approaches in practice, as these deviate from traditional specification and bring challenges around change management and risk,” she adds.

“For example, reduced carbon concrete products are yet to be approved by design standards.”

Clark points out that, although some materials may seem to emit less carbon on paper, contractors must also consider how these products themselves are made and how far they have to travel to arrive on site.

“It’s not black and white that one is always the right choice,” says Clark.

“Understanding the implications of choices needs to be more intelligent – cement replacements such as Ground Granulated Blast furnace Slag (GGBS) and Pulverised Fuel Ash (PFA) are reliant on waste outputs from the steel production and coal-burning industries.

“And high recycled-content materials such as steel can be challenging to source for construction projects and will not be as low carbon if sourced internationally.”

But, unless readily available and cheap alternatives are found and put into use soon, many fear that the impact of a swathe of construction projects across the developing world could prove devastating.

Cement use in the developing world

Cement production is likely to rise 12% to 23% by the middle of the century, according to a report by the International Energy Agency as some of the world’s poorest countries continue to urbanise.

“In Southeast Asia, India and Africa most buildings that will exist in 2050 haven’t been built yet,” said Markus Berensson, C40 research manager.

“It is a critical opportunity [to reduce carbon emissions by using greener building materials] that many cities and nations should start considering.”