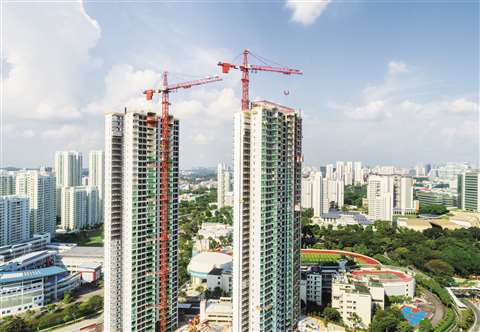 Towering over everything, cranes are often seen as the Kings of the construction site.

Two of these new Liebherr tower cranes made their debut working on the world’s tallest concrete module structure in Singapore.

PPVC is a method in which free-standing volumetric modules, complete with finishes for walls, floors and ceilings, are prefabricated before they are then erected on a site.

Much of the construction work was therefore done off-site in a controlled manufacturing environment. This is said to boost productivity in terms of manpower and time as well as minimising dust and noise pollution, while upgrading skills and improving on-site safety.

Although this form of construction is used elsewhere around the world, this project is the tallest ever to be built using concrete PPVC.

The final construction consisted of 505 apartments with a total floor area of 46,000m². Under the Singapore government land-sale requirements, 65% of the superstructure had to be constructed using reinforced concrete PPVC modules. 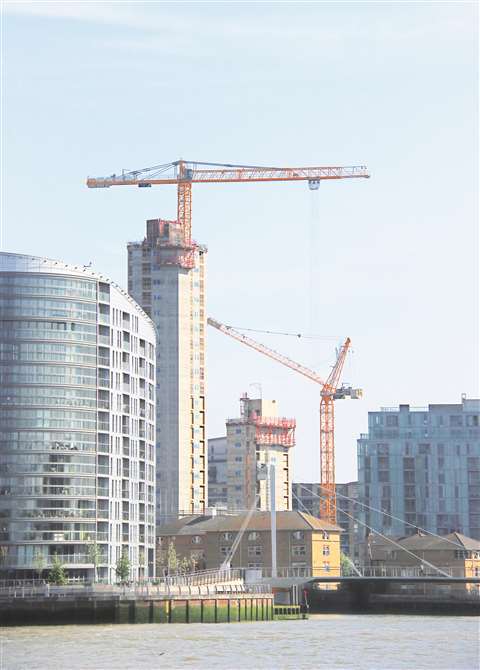 Jaso J700 with 24 tonnes capacity working on a PPVC project

To date, these cranes are the heaviest-lift tower cranes ever to have been imported into Singapore, with a lifting capacity of 40 tonnes at a working radius of 35m.

In a move to improve the productivity on construction sites, Singapore created select zones for mandated PPVC in late 2014.

Senior methods manager on the Clement Canopy project, Kevin Lai, said that an advantage for this construction was the size of the tower crane sections.

“The 2.4 x 2.4m size of the tower sections means that transport was easier and did not incur higher costs. Also, there is less room taken up on site.”

According to Lai, Singapore only allows tower cranes to be used for ten years, no matter what the brand, and so investments in this type of equipment must take this into account.

As this was the first occasion that a Liebherr 40-tonne capacity tower crane had been brought into Singapore there was a lengthy and stringent approval process that had to be completed. This took around six months, before the cranes could be imported into the country. Once on site the cranes took between four to five days to erect.

Looking to expand its product range, Spanish manufacturer Jaso has launched its largest crane to date, the low-top J1400 top slewing tower with 64 tonnes capacity that can have a jib up to 80m. It has a tip load of 10.5 tonnes at 80m and its shortest boom is 25m. Capacity for the machine is still 36 tonnes at a 40m radius. 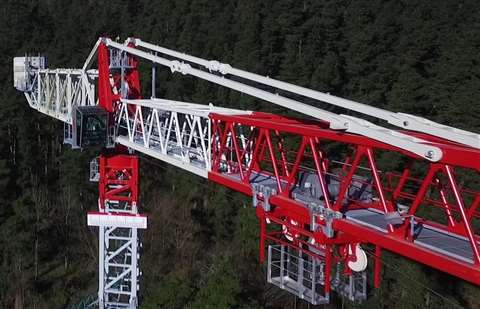 When increasing the hook height to 150m capacity is only reduced by 1.4 tonnes to 34.6 tonnes, even with all the extra weight of the steel hoist rope.

While it is suitable for dam construction and similar heavy civil projects, a target application for this new model is the PPVC housing construction programme from the Singapore Government’s Building and Construction Authority.

Theodor Huitema, Jaso area manager, said, “This crane is specifically designed to easily lift PPVC loads of 35 to 40 tonnes up to a height of 150m without a loss of load chart due to the weight of the 28mm diameter wire hoist rope.”

Crane World Asia, a crane rental firm in Singapore, has added four of these new Jaso towers to its fleet. 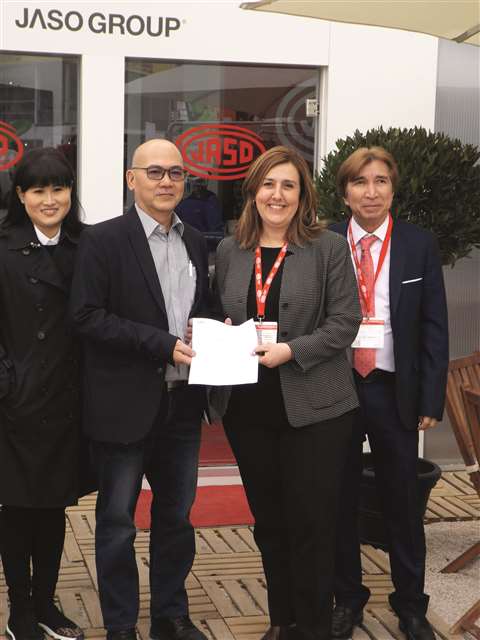 Minimal swing radius is an important requirement in Singapore. To achieve this, four modular counter jib configurations have been made possible. The counter jib radius ranges from 18.1 to 29m. Optional steel counter weight slabs also allow the radius to be reduced by a further 1.8m. The tower system comes in 5.6m-long sections at 2.16 x 2.16m.

Roger Poon, managing director at Crane World Asia, said, “We specifically wanted a tower crane with a jib that doesn’t over sail to comply with Singapore’s strict standards.”

Transport dimensions are an important feature. A crane with a hook height up to 56.5m and the full 80m boom can travel in standard 40-foot ISO shipping containers with no special open top or flat racks needed. A folding counter jib design facilitates this, with the heaviest component weighing 10 tonnes.

Another high-rise project, which this time involved a crawler crane, was Superior Rigging & Erecting Co.’s recent project for the Seminole Hard Rock Hotel and Casino in Florida, US.

The Seminole Hard Rock Hotel and Casino under development

The venue is undergoing a US$1.5 billion expansion and is scheduled to open in Autumn 2019.

The crane of choice was Liebherr’s LR 1300 SX crawler crane with a loading capacity of 300 tonnes. This crane was said to be ideal for hoisting large 30 tonne steel trusses that were required to build the new structure. 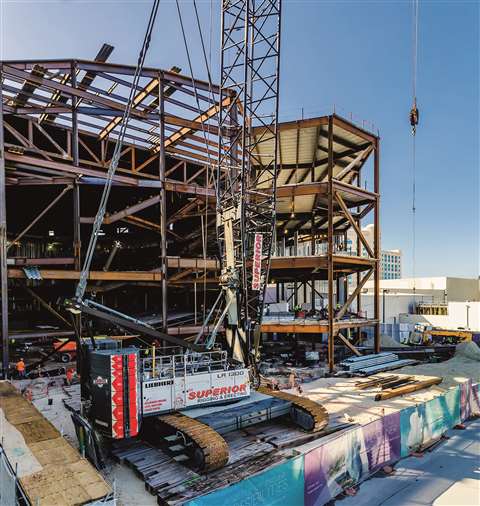 Boasting a maximum hoist height of 169m and a radius up to 115m, this crawler crane is primarily designed for high load lifting work and is said to be easily assembled and disassembled.

Elsewhere, following the success of its WT260 flat-top tower crane that was introduced in 2017, a new generation of flat-top cranes has been introduced by Wilbert. Germany-based Wilbert has recently been purchased by Zoomlion.

The new range starts from the 8 tonne WT 180 e.tronic to the 32tonne WT 720 e.tronic flat-top towers. According to the company, the cranes are developed with the same DNA as the WT260 which has sold 40 units since its inception.

The new WT 720 e.tronic  offers a 30 to 85m jib which can be adjusted in 2.5m increments. Three counter jib lengths are available. It has a 3m high top tower section and all of the components involved fit standard containers. A 110kW hoist gives 240m/min lifting speed and the tip load on the 85m jib is 5.4 tonnes. 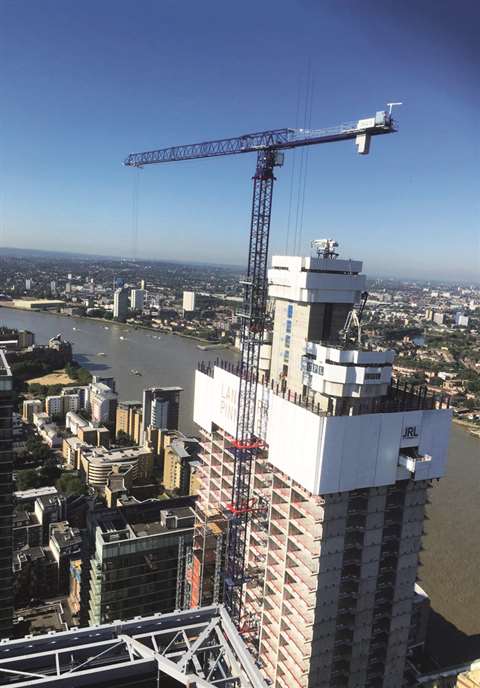 A Saez crane is currently operating as what the company says is the tallest residential crane in Europe at the moment.

The project is a 75-storey residential tower that has been designed with a triple glazed façade providing a continuous skin behind which all apartments have private winter gardens.

The property is intended to have three floors of shared amenity space including a landscaped roof garden, gymnasium and children’s play areas as well as a public café with an indoor and outdoor play area.

The crane was erected at 104m freestanding and then six further sections were added in, until reaching a final hook height of 254m. 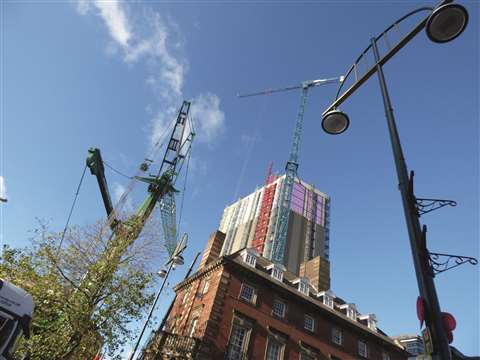 Another Saez crane also being operated in the UK is a TLS 65B 10T that was erected in Birmingham. At 114m freestanding the crane had to be tied in to prevent it from hitting the building as a result of deflection.

Back to Germany, at Bauma this year Wolffkran launched the 133 B, a hydraulic luffing jib tower crane. It replaces

the 100 B and joins the range below the 166 B. Its designed with a hydraulic cylinder instead of a conventional luffing system of ropes, allowing a smaller out of service radius.

Installation is said to be quicker without luffing ropes to reeve. The crane comes in two different versions, the 6 tonne capacity 133.6 B with 2.3 tonne tip load at the maximum 45m radius and the 133.8 B, an 8 tonner with a tip load capacity of 2.1 tonnes. 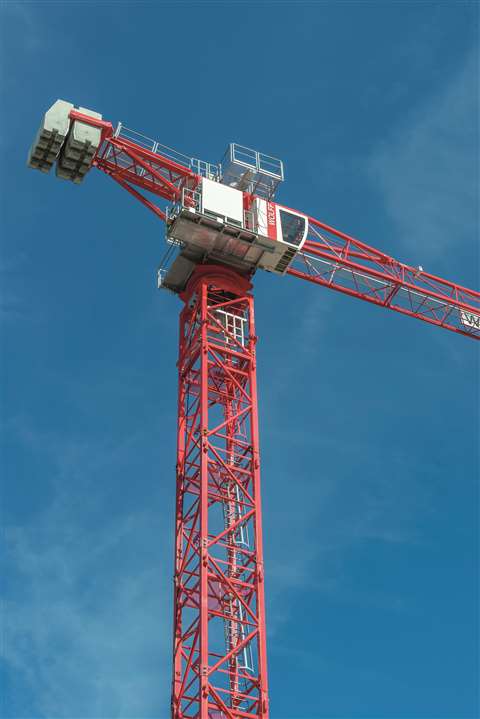 Extremely short counter jibs are requested at PPVC projects, as demonstrated by the Wolf 133 B

The basic 25m jib can be extended in 5m increments. The 133 B will be supplied on the 2 x 2 m UV 20 tower system giving a maximum freestanding height of 85m. A connection for a 1.5m tower is in development, Wolffkran said.

Another crane at the show from Wolffkran was the Wolff 6020 clear flat top tower, a development of the 6015 variant. It lifts more and incorporates other design elements to benefit operation, erection, dismantling and transport. 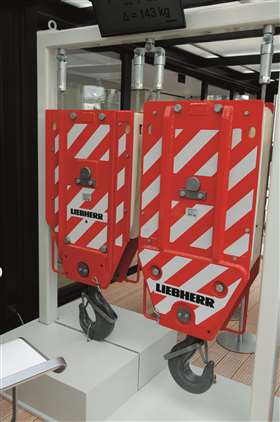 The transition from steel rope to synthetic rope has been a slow and steady process with most manufacturers still in the testing phases. However, Liebherr’s partnership with Austria-based rope manufacturer Teufelberger has seen seven years of development in order to make its high-strength synthetic fibre rope SoLite.

Though first introduced at Bauma 2016, this year at Bauma 2019 Liebherr introduced the new rope as part of its tower crane range. Available from April this year, the new rope is said to provide benefits of up to around 40% more capacity compared with steel rope. Smaller hook blocks will be used that reduce the hook weight from 365 kg to 215 kg. 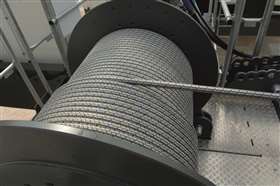 New fibre rope on a drum

Further benefits include no need for rope lubrication, a long service life and clear discard criteria. Different coloured rope is used to show wear at different rates, so crane operators can easily see when the rope has to be replaced, alongside electronic condition monitoring.