Guidance on lifting with excavators 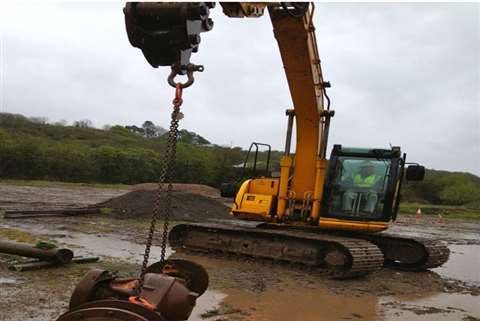 Work has started to update the Construction Plant-hire Association’s (CPA) guide to lifting with excavators.

In 2008 the CPA, with Health and Safety Executive (HSE), Construction Equipment Association (CEA) and the Construction Confederation in the UK produced a short guide, Lifting Operations in Construction when Using Excavators. It was revised in 2009, since when growth in lifting suspended loads with excavators has continued. Changes in standards and expectations of users have further driven the need for a major revision and expansion of the guidance document, CPA said.

The Strategic Forum for Construction, Plant Safety Group, which is funded and administered by the CPA, is heading the project. Under the chairmanship of Kevin Minton at CPA an industry-wide working group has been formed to draft the guidance. The working group includes representatives of major excavator owners, manufacturers, training organisations, contractors, the CEA and the HSE, CPA said. Before publication a draft will be circulated for public comment. All comments will be considered by the Working Group prior to preparation of a final draft.

In addition to the full guidance, the working group will provide guidance in briefer formats, including lists of key points for supervisors and operators, and for toolbox talks.

Topics in the revised guidance will include the following: lifting with backhoes, 360° excavators, both crawler and wheeled, and front loaders; planning and supervision of lifting operations; selection of excavators used for lifting; planning, supervisory and operating personnel – roles and responsibilities; specific issues, for example, hazardous location issues – roads, railways etc; lifting people; use for entertainment purposes; use of attachments; maintenance and inspection; thorough examination.

The guidance aims to “cover the questions that anyone contemplating lifting suspended loads with excavators should ask themselves.” It should always be remembered that excavators are primarily designed for excavating and handling loose material, instead of lifting suspended loads. It introduces additional risks in carrying out lifting operations that are not present with conventional cranes and need to eliminated or reduced to an acceptable level.

Publication is scheduled for the first half of 2017.