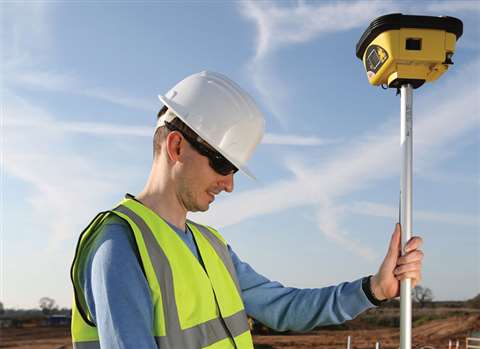 The new, robust Leica iCON CC80 Controller is said to be the smallest and lightest controller on the market.

The move towards building information modelling (BIM) technology in the construction sector looks to be an irreversible trend, just as many aspects of our everyday lives are now digital. We communicate electronically, rather than on paper, we navigate in our cars using GPS instead of maps, we download music online rather than buying a CD in a shop, and so on.

So we can expect the construction sector to become more and more digital, with the surveying and associated software sector very much at the sharp end of developments. The companies which have traditionally made surveying instruments are now more like technology companies, offering increasingly sophisticated software to go with their hardware. In addition, there are start-up companies coming into the sector as construction applications are found for new technologies.

But the challenge is to produce products and software which those in the construction industry find intuitive and easy to use. It is an area where there seems to be progress.

For example, Leica Geosystems has released the new iCONstruct field software and hardware. Two key products are the new, robust 7in (178mm) Leica iCON CC80 Controller, which it said was the smallest and lightest controller on the market with “outstanding outdoor visibility”, and the enhanced v2.5 iCONstruct field software, which is said to provide easy-to-understand, real-time project information.

There is also the Leica iCON 60/80 GPS receiver, which uses the company’s ‘SmartLink’ technology to maintain accurate positioning if real time kinematic (RTK) GPS is interrupted.

Leica said the simplified and clean layout of the field software allowed intuitive operation, using real-time design data with in-vehicle features such as cut/fill comparisons or volume calculations. It added that sophisticated building and road design were now especially easy to understand, enabling non-surveyors to measure or work on layout design on-site.

This in turn means surveyors can be freed of time-consuming tasks, which can now be tackled by construction workers. The role of the surveyor is arguably becoming more about providing the correct data to ensure project quality. Meanwhile construction teams can remain productive and more independent, with faster quality checks and better understanding of job progress on site.

Combining five cameras, which work in a variety of light conditions, and a light & radar (LIDAR) profiler with a light and ergonomic carbon fibre chassis, the mobile mapping system creates a 3D view of indoor or outdoor areas for documenting projects.

For BIM applications or simply for capturing 2D updates to a large building, the backpack is said to create the most realistic view by capturing synchronised imagery and point data. Accurate positioning is achieved in areas where GPS and other global navigation satellite system (GNSS) signals may be weak using simultaneous localisation and mapping (SLAM) technology.

Leica says this amounts to a ‘position agnostic’ system, meaning there doesn’t need to be an external datum or reference position such as a GPS signal.

Stuart Woods, Leica’s geospatial solutions division vice president, said, “Users will never again forget any aspect of any job nor need to return to a project site. They can capture everything by simply arriving on site wearing the technology, capture and leave, rest assured they have everything they need to complete the job on time and on budget.”

Meanwhile Topcon has introduced an upgrade to its ScanMaster laser scanner software package. ScanMaster v3.05 is designed to handle larger clouds of points than commonly collected with the GLS-2000 scanner.

Charles Rihner, vice president of the Topcon Geo Positioning Group, said, “The latest version includes memory overflow improvements when the operator creates large point clouds and views wide images, which allows for an even smoother experience than before.

“The point density display settings have also been modified and optimised for easy adjustment depending on instances when faster performance or better quality is more desirable.”

The software continues to be backward compatible with earlier scanner models including the GLS-1000 and GLS-1500.

The upgrade is available at no charge to users with current Topcon Enterprise Solutions accounts.

The software merges technical and schedule information into one dynamic plan, with a new Gantt chart format that visually connects the site layout with the user-defined time frame of a project. Graphics representing project locations such as bridges, culverts and intersections as well as work types such as concrete, steel or earthworks provide additional clarity, said Trimble adding that this made the plan more intuitive and easier to read at a glance.

The new grouping and formatting represent the schedule in a digital wall chart format, which is frequently used in lean production to show progress in a simplified manner. In addition, Tilos can now plan and manage non-linear parts of the infrastructure project for a more complete solution.

To try to simplify data exchange, Tilos version 9.0 has been redesigned to improve the integration functionality with third-party project management software such as Primavera, Microsoft Project and ASTA Powerproject.

Meanwhile, 3D Laser Mapping has launched “a powerful solution that will revolutionise the production of highly accurate building floor plans.”

It said that by combining the easy-to-use ZEB1 hand-held laser mapping system with intuitive point cloud processing software, the end-to-end solution would allow users to scan and produce detailed floor plans in a matter of minutes.

ZEB1 uses SLAM robotic technology. The system includes a lightweight laser scanner mounted on a simple spring mechanism, which continuously scans as the operator walks through the environment. As the scanner loosely oscillates about the spring, it produces a rotation that converts 2D laser measurements into 3D fields of view.

The company said its ability to self-localise made ZEB1 suited for use indoors, underground and in other covered environments where traditional solutions that use GPS don’t function.

Attack of the drones

The use of an unmanned aerial system (UAS), or remotely piloted aircraft system (RPAS) - drones as they are often called - is increasing in the industry.

Topcon Positioning Group has added a rotary-wing UAS to its mass data collection solutions line for the European marketplace. The Falcon 8 – powered by Ascending Technologies – is designed for inspection and monitoring, as well as survey and mapping applications.

Francois Erceau, vice president of the Topcon Geo Positioning Solutions Group in Europe, said, “Rotary-wing systems provide the perfect solutions for small-scale sites and projects for which flexibility of take-off and landing, or an oblique perspective, is required.”

He said the Falcon 8 offered the flexibility to manoeuvre in small spaces and could cope with challenging environments which are often the case in inspection and monitoring.

“It is also well suited for smaller mapping or modelling projects up to 35 Ha that require high-resolution imaging,” he said.

The Falcon 8 features new an autopilot safety feature that provides three levels of redundancy for protection against performance drop or loss of control. Three inertial measurement units (IMUs) synchronise all sensing data and identify, signal and compensate when needed.

Two models are available – the Geo Expert for surveying, modelling and mapping projects, and Inspection Pro for industrial inspection and monitoring applications.

The Geo Expert includes an high definition camera, while the Inspection Pro features a camera and infrared sensor combination.

SLR Consulting Ireland is helping clients to capture real-time surveillance of dynamic site conditions with the use of its RPAS.

“The benefits of using drones are already proving attractive to our clients, especially in the minerals and development sectors, as they really appreciate both the cost and time savings over traditional surveying methods.”