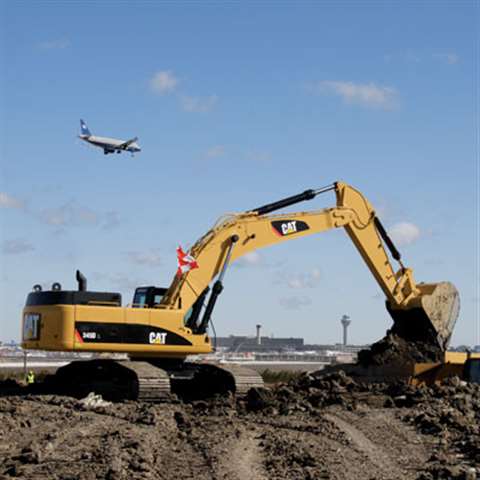 Modern excavator design is not just about productivity, ease of service and maintenance and (of course) fuel efficiency. Manufacturers are also putting more and more effort into improving operator comfort and making machines easier to use. Richard High reports.

Trade exhibitions are often the launch pad for new excavators, and with all the models unveiled at last April's Bauma in Munich, Germany, visitors to this year's ConExpo could have been forgiven for thinking there wouldn't be many new machines to see. But the show still had some surprises up its sleeve.

Hyundai unveiled the first of its new Dash-9 series excavators, which will replace the current Dash-7 models from the end of this year, in the shape of the 21 tonne class Robex 210LC-9. Operator comfort is a big feature of the new range. A brand new cab design features reduced noise levels, air-conditioning as standard, joystick controls with lever-pattern change options, and a new control panel with on-board monitoring system and a built-in rear-view camera.

According to the company, "The complete range has been conceived as a truly ‘global' concept, to meet the increasingly stringent international legislative requirements, in terms of energy efficiency, safety and the environment."

This model on show was powered by a 107 kW Cummins QSB 6.7 Tier 3/Stage IIIA complaint engine, which is quiet and clean and meets all current noise and exhaust emission standards. Hyundai's ‘smart' hydraulic system allows the operator to choose between digging modes and power settings to maximise productivity and fuel economy. An additional advantage is the provision of variable oil-flow and pressure settings for attachments.

Service and maintenance have been given close attention, with the inclusion of a GPS tracking system as well as remote machine monitoring access. In addition, service intervals have been extended to 1000 hours for hydraulic oil filter changes and 5000 the oil itself.

JCB also used the show to unveil a prototype of the biggest machine it has ever made, the 52 tonne JS520, which will go into full production later this year. JCB is planning to produce three to four machines per month from its UK Heavy Products factory.

The machine features an expandable undercarriage and four working modes. Like Hyundai's Dash-9s, maintenance is helped by the fact that the hydraulic oil change interval is 5000 hours, with the filter needing replacement every 1000 hours.

Also new is Caterpillar's 345D L. A "direct replacement" for its 345C L, engine power has been increased by +10%, but the 283 kW Tier 3 compliant 345D L uses about the same amount of fuel, according to the company.

To conserve fuel during light-duty work, the hydraulic and engine control system has been redesigned to include a new power management feature. The operator, via the monitor in the cab, can now select different settings without sacrificing breakout force or lift capacity.

An optional Tool Control System lets the operator pre-set flows and pressures for as many as 10 attachments using the in-cab monitor. Then the operator can select the tool at the touch of a button, without resetting the hydraulic system.

Also filling in some of the gaps in its range is New Holland. The latest models in its B-Series are the 28 tonne E265B, 31.6 tonne the E305B, 37.8 tonne E385B and the top-of-the-range 50.2 tonne E485B. They feature ergonomic cabs, a new generation of display - backlit, larger and easier to read - easier service and maintenance requirements and a new engine design.

According to the company the new Tier 3 engines, developed by New Holland and Fiat Powertrain Technologies, "stretch the boundaries of what can be done in reducing emissions: they go well beyond what is required guaranteeing carbon monoxide levels below regulations by up to -80%."

They also reduce fuel consumption by -15%, and can run on 20% biodiesel, which further helps reduce carbon monoxide and particulates.

All service points are easily accessible, while the layout of vital components has been simplified, with most positioned to enable access from the ground level, as are new grouped and centralised greasing points for the boom.

Launched last year, Volvo's 70 tonne EC700C is largest excavator the company currently makes, and "will make you think it's in the 80 tonne class".

The largest excavator on Liebherr's stand at ConExpo was the 120 tonne R 984 C Litronic. Powered by a Tier III compliant, Cummins Common Rail QSK 19 engine, which develops 504 kW at 2000 rpm, the R 984 C is "built with heavy construction and quarrying in mind," said the company.

Of particular interest is the "pressureless" boom lowering, which allows the boom to be lowered without pumping hydraulic fluid through the cylinders. This, said the company, not only results in quicker cycle times, but also increases machine efficiency by allowing that hydraulic power to be used for other functions.

With 35% of the machine's weight concentrated in the under carriage the R 984 C is well balanced and offers extreme stability when using its 10 m3 bucket.

ConExpo also provided the opportunity for several manufacturers to announce expansion plans for the coming year. China's Liugong told iC it was targeting the US, with its search for dealers hotting up. The China-based equipment manufacturer officially opened a US sales office in Houston, Texas and hopes to appoint 10 North American dealers this year.

According to company president, Zeng Guang An, the company increased exports by +90% last year to US$ 175 million. Talking to iC at the show, Mr Zeng said that the market in China continues to increase significantly.

"In the first two months of this year the excavator market increased by +70% compared to the first two of last year", he said. Overall this year, Mr Zeng expects excavator sales in China to increase by around +30% this year.

While China's Liugong is looking for US dealers, US-based John Deere said it would be expanding its presence in China through a 50:50 joint venture with Xuzhou Xuwa Excavator Machinery Co., Ltd. (XCG), a subsidiary of Xuzhou Bohui Science and Technology Development Co. Ltd. (Bohui).

XCG claims to be the third largest domestic excavator manufacturer in China, with dealers covering all but two provinces, and a 14-model excavator line. While Deere has a long-term Chinese presence in manufacturing agricultural equipment, this is its first in construction equipment.

Also announcing expansion plans in China this year is Japan's Sumitomo. It plans to establish two manufacturing facilities at Tangshan City, one will manufacture gear reducers, the other hydraulic excavators. The move comes, said a company statement, as demand for both products "is increasing significantly" in China.

"Since further expansion of the market is anticipated, the establishment of a new production location in China has been decided, as particularly significant growth is expected there in the future," said the company

The new excavator plant Sumitomo's first outside Japan and both factories should start production in February.

The emergence of more export-minded excavator manufacturers like Liugong is giving contractors and rental companies more and more options when it comes to buying excavators. It will take time of course. Selling a machine is not just about a one-off deal, but parts, service and support as well. This requires a strong infrastructure and good dealers, which cannot be put in place overnight.

On the other hand, more and more manufacturers are targeting China, as Deere and Sumitomo's latest announcement show. It's not surprising. With almost 50000 excavators sold in China last year it is the largest market for these machines in the world, and growth shows few signs of slowing. More joint ventures and excavator factories look certain for the future.