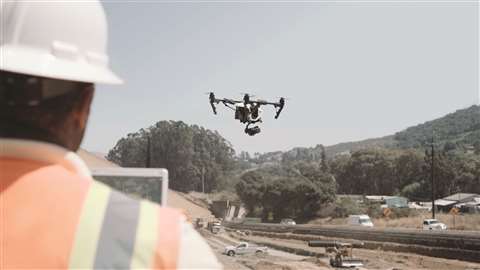 A drone in flight, mapping out a construction site and logging the position of every item of equipment

In 2017, it would seem that the conversation about whether or not drones can be a valuable tool for the construction industry is pretty much over.

For contractors working on large projects, the advantages are clear, and we are already seeing drones being used by many as a means of keeping track of multiple job sites. It is, in fact, becoming as easy for a project manager to check progress on a job site as it is to check emails.

Daily or weekly drone flights are now offering project teams on-demand visual histories of the progress being made on excavation, construction, road building projects, and so on… and it appears to be a win-win as, along with almost instantaneous data retrieval, the costs are far lower than employing surveyors to walk the site. 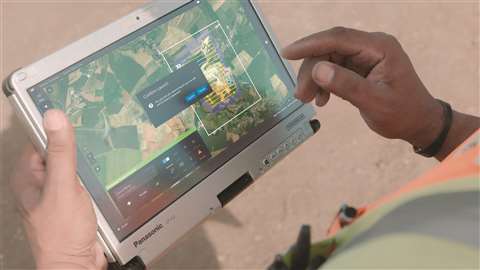 With the flight plan installed, launching the drone is as simple as pushing a button on a tablet screen

De Maistre is also the co-founder of the drones data anaylsis firm Redbird, which was acquired by Airware in September last year.

Furthermore, through a marketing agreement with Caterpillar, the Airware/Redbird solution is now being offered to Caterpillar customers worldwide.

It sounds like a complicated story, but De Maistre believes the coming together of these companies offers the perfect opportunity for the construction industry to gain access to technology that will help make it more efficient, less expensive and safer.

He explains his vision, saying, “A lot of people see drones as a survey tool, as a new GPS, that is safer, faster and cheaper. And that’s correct, but if drones are only used to generate the usual survey data, there is nothing really innovative or new. 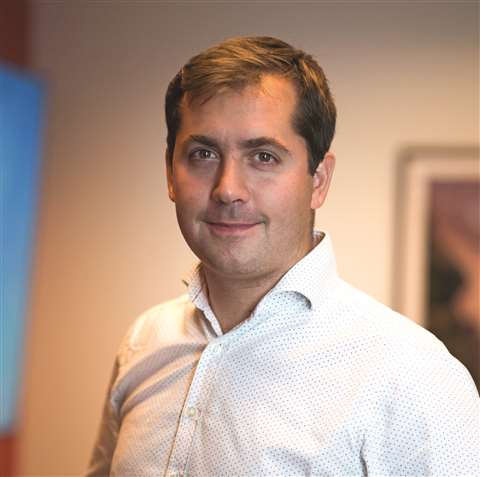 Emmanuel de Maistre, VP at Airware and co-founder of Redbird

“When drones are used to massively digitise a site – every day, every week, every month – and when drone data is being used to collaborate between people, and display this kind of information, this is where we have a real disruption opportunity.

“Of course, it won’t fix everything, which is why we have made the system part of Cat Connect, so this technology can be complementary with other technologies – largely safety- or production-related technologies.”

Cat Connect technology was introduced by Cat some years ago, to give customers the ability to monitor and manage their equipment fleets, be they Cat branded or mixed.

De Maistre says that, through the use of drones, “People can manage dozens, if not hundreds of sites, whether quarries, mines, construction sites, and so on.

He says, even though managers are based in different locations, it’s a simple matter of logging in to analyse the data from regular drone flights and track the changes that have taken place on site between one flight and another. 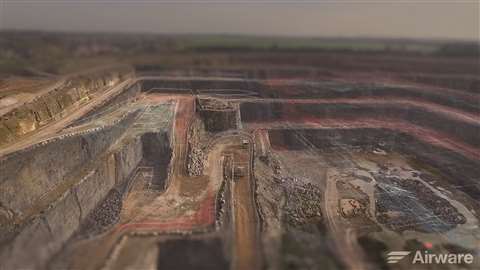 By flying over a quarry, a drone can construct a map by stitching together hundreds of photographs in a process called photogrammetry

Using the example of a 160 hectare quarry, he says it would take around two hours for a drone to fly over, taking perhaps 1,000 photographs, which might require around 2GB of data.

A map is then constructed by stitching together the images, using a system called photogrammetry. While the images are 2D, the data gathered is 3D, as millions of points can be laid over the map, giving X, Y and Z co-ordinates to create a 3D picture.

Continuing with the quarry example, the differences that can be analysed between a new map and the one drawn from a previous flyover could show where a stockpile has been removed or where a profile has been blasted.

De Maistre says, “If I want to measure the volume of a stockpile, I can just click around it, to make a polygon. As soon as I finish drawing the polygon, the calculation can be in progress and I will have the volume in seconds.

“It used to take hours for a surveyor to climb onto the pile, take measurements, go back into the office and make the calculations.

He describes the collaborative way the data from drone flights can be used across one site or multiple sites, saying, “I use the term ‘social quarry’ sometimes; that is the concept. Sometimes, you could have 10, 20 or 100 people collaborating on a site and the conversations can be filtered by type, by date, by user, etc, to avoid all the annotations being confusing.”

Drones are largely used to measure the progress of a site, the efficiency and productivity of the team and to aid with matters of safety.

How the drone helps measure progress has been explained, but efficiency and productivity require the software to be integrated with telematics technology.

“In this way,” says De Maistre, “We can go beyond fleet management and try to understand when and why some events are happening – and take action to fix issues.

“Telematic data is being sent to the cloud and we connect to the telematics to analyse it and display it on the map. 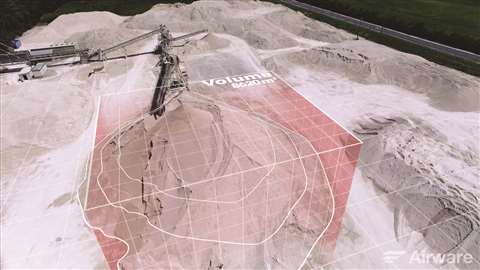 “In the past we knew that on the site certain things were happening. For example, over a week you might see 1,000 idle events, with some machines idling for up to 40 minutes. You would also know the fuel consumption related to these events.

Drone flights can also pick up on over-height safety blocks, dangerously site walls, or steep gradients on site roads, that could cause safety issues, or have an adverse effect on fuel economy.

The possibilities for contractors utilising drone technology seem to be game-changing – and yet the sector is still young. Or is it?

De Maistre says, “Drones are not new; they’ve been used by the military for 40 years. What’s new is the revolution of smartphones, which has transitioned into the drones industry. The drone has a camera, a GPS, a CPU, processor, axiometer, compass, etc. It’s basically a flying smartphone.”