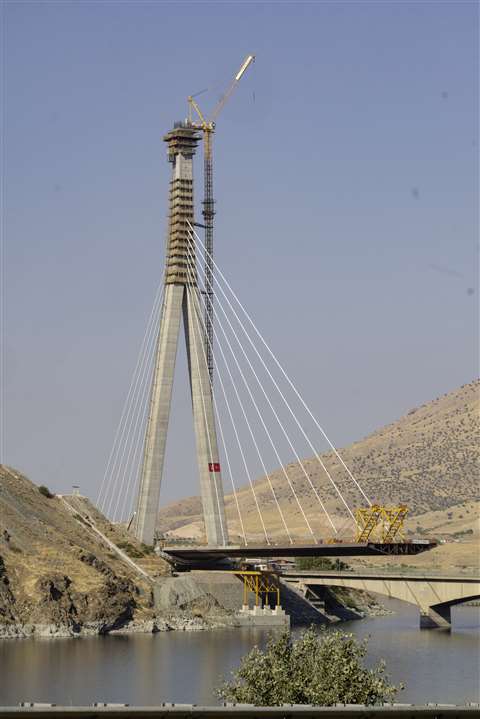 Constructed over the Karakaya Dam Lake, the Kömürhan Bridge will soon be the fourth single-pylon cable-stayed bridge in the world, forging part of the Malatya-Elazig State Highway in Eastern Turkey.

Working under the joint venture of Doğuş and Gülsan, Doka Turkey was awarded the contract to design and supervise the execution of formwork, which commenced in August 2017. The project is expected to be completed in July 2020.

Measuring 600m in length, this specialty bridge serves a regional role as a logistics corridor, not only connecting Malatya and Elazığ, but also as a strategic crossing for the 16 provinces of Eastern Anatolia.

Located approximately 700km east of the Turkish capital of Ankara and 400km north of the Syrian border lies the province of Malatya, a region famed for its apricots and now the tallest pylon in the country.

Standing at a height of 168.5m, the ‘Y’ shaped reinforced concrete tower is the centrepiece of the new Kömürhan Bridge, a suspension structure traversing the Fırat River and the Malatya-Elazığ regional borders.

Stretching just over half a kilometre, the bridge has an edge opening of 180m, a middle opening of 380m and a width of 24m. The deck cross-section will be orthotropic steel, while the superstructure of the bridge will be connected to the pylon with 42 tensioned cables.

In context of the wider project, it is part of a 5,225m four-lane highway that includes a 120m viaduct and a 2,400m tunnel, providing passage to the Karakaya Dam a few kilometres to the south. The existing old bridge and crookedly connected roads will be preserved. The new bridge and the tunnel will be developed next to the existing route.

In terms of the practical formwork solution, the major challenge was focused on the pylon, specifically its unusual shape. Doka’s Automatic Climbing Formwork SKE 50 was used on the upper single-core column of the pylon, while a specially adapted double set was used on the lower half with bespoke solutions created at junction points to maintain the highest standards of quality and safety.

Large-area formwork Top 50 was used for the pylon with Doka D2/D3 and load-bearing Towers Staxo 100 shoring systems for the approaching viaduct. While a tower and mobile crane were used for the pylon and viaduct respectively, the formwork solution was otherwise self-sufficient and delivered its portion of the project safely, on time and on budget. 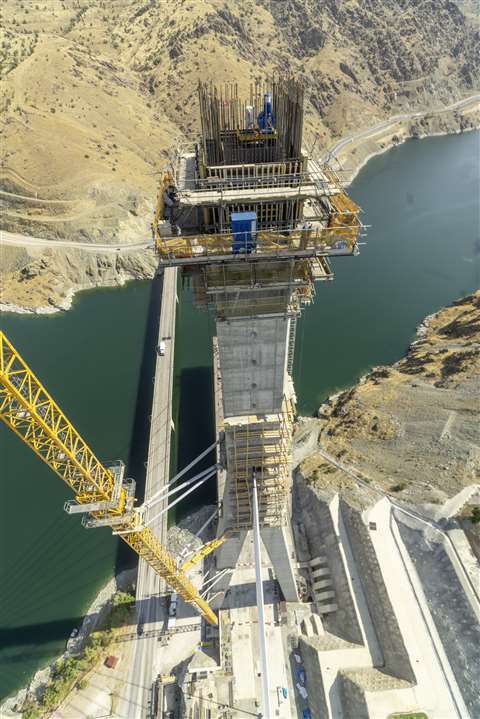 “Safety was our main priority on this project and Doka has maintained an excellent track record where this is concerned,” project manager Taha Ozdilek said.

“Most of my team were accustomed with Doka’s products and systems and knew what the solution presented, and that the site support received would add much value. Our team was also familiar with Doka’s solution for a similar project (Nissibi Bridge), which was delivered in 2015 and therefore knew they would be well suited for the job.”