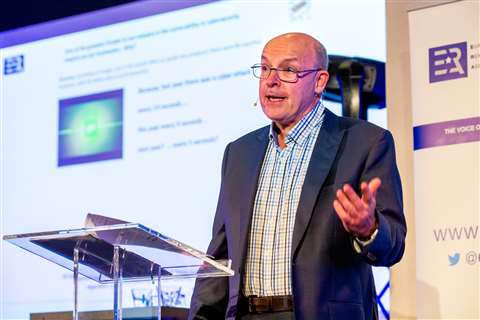 For every cyberattack that is reported, there could be five or six that are never mentioned, said David Riley, a director at epi Consulting, speaking at the recent convention of the European Rental Association.

Epi is the UK-based consultancy that helped ERA draw up its recent cybersecurity guidelines.

Riley told delegates that equipment rental firms faced special cybersecurity risks, with potential vulnerabilities relating to telematics and data transfer; the aggregation of data for digitalisation projects; and hub and spoke depot networks that lead to choices between centralised or ring-fenced security strategies.

How can you prevent a cyber attack?
His key message was that it was impossible to totally prevent an attack, “even if you have the most advanced protection.”

He said it was important to be more difficult to attack than others; “don’t aim to be the leader, aim for ‘fit for purpose’, not ultimate protection”. He concluded that vulnerabilities are usually found in people and compliance with security protocols.

The ERA has published a guide to cybersecurity. View details here.

International Rental News magazine is holding a free cybersecurity webinar on 4 November, with participants from Loxam, Palfinger and Ritchie Bros.