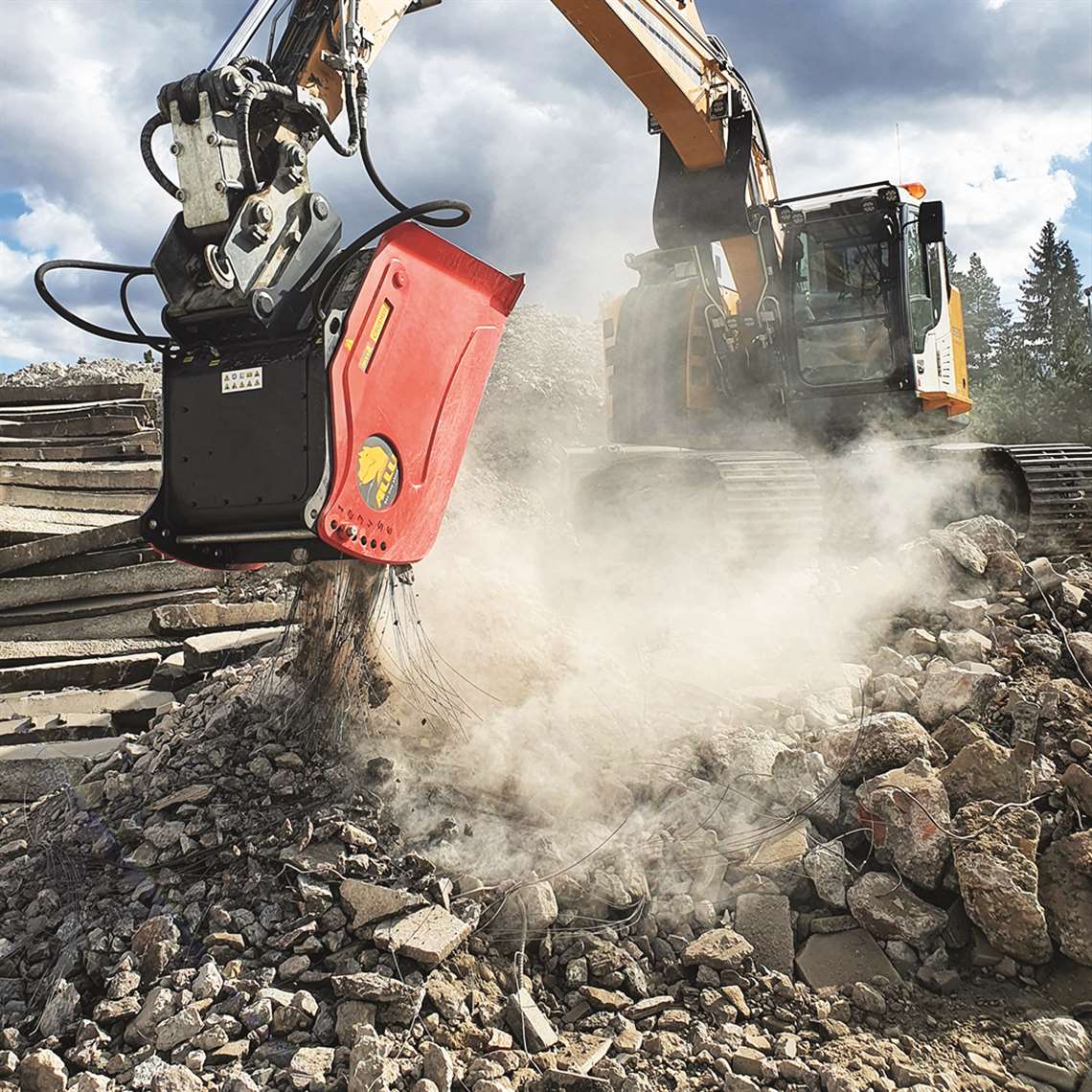 Allu has been making screening buckets for over three decades

One of the biggest trends in the world at the moment – a megatrend – is sustainability. Environmental concerns are increasing and governments are implementing policies that reflect this that impact the construction industry, with the implementation of Tier 5 engines emissions in Europe being an obvious example. Increasing numbers of companies are pledging to increase their efforts to become carbon neutral.

The crushing and screening industry was already one with ‘green’ credentials – the process of crushing and screening enables contractors to size and separate waste material to make a quality product that can then be reused or sold, creating a profit. If the material is not recycled, this leads to deposit and transport costs, emphasising the importance of this type of equipment.

Kieran Hegarty, President, Terex Materials Processing, says that, “Environmental issues continue to be important for our sector, with the rising urgency to deal with waste globally presenting lots of opportunity for our environmental equipment. We have machines that can crush, screen, separate, wash and transfer materials and this variety across our product portfolio, along with our team’s collective experience and global reach enable us to compete strongly in the waste management and recycling markets worldwide.

“Additionally, as a manufacturer we have a responsibility to invest in developing new energy solutions to give customers the best power option choices for their operations. With increasing environmental pressures there is an emphasis on fuel efficiency, a focus on reduction of noise and dust, and a move towards hybrid and electric machines.”

He adds that the company have more fully electric crushers and screens than ever before, as well as models powered by combinations of diesel and electricity. These types of machines are often most popular in areas where electricity is more cost effective than diesel fuel and engine noise can be an issue. 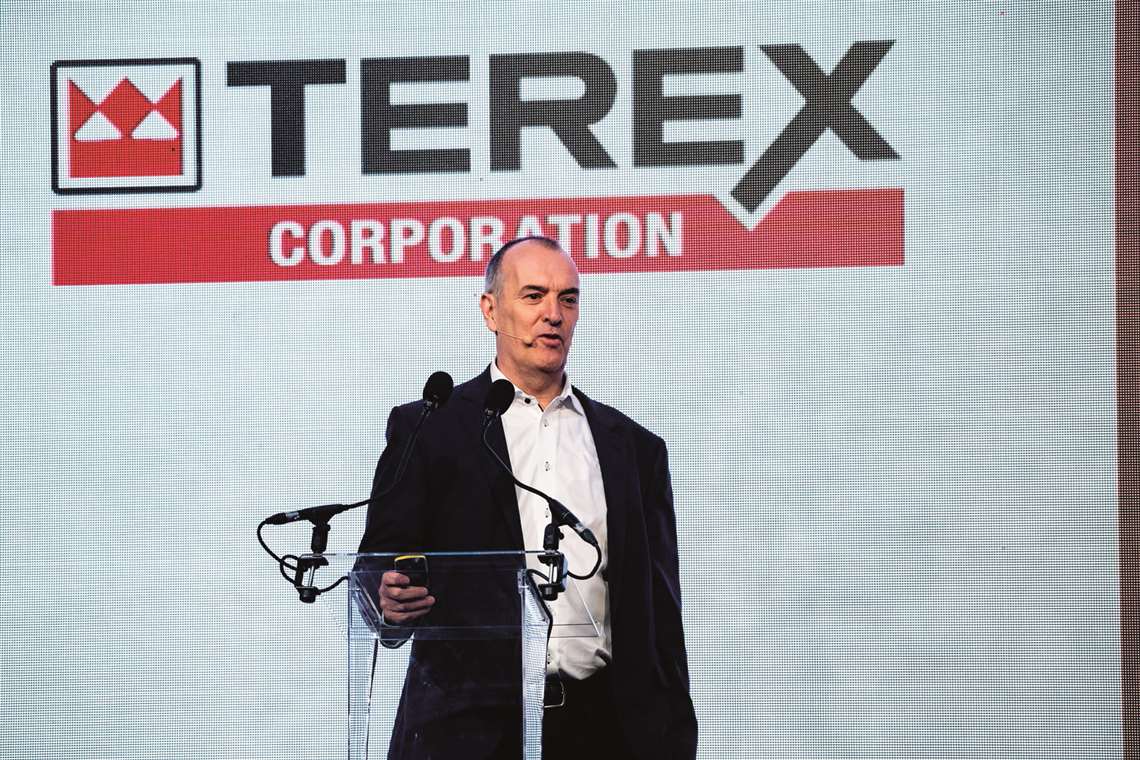 This echoes the views of Metso Outotec’s president and CEO, Pekka Vauramo. In an interview with International Construction magazine that appeared in the September issue he said, “We are convinced that climate change will be the topic when Covid is over, and the day will come when Covid goes away from the headlines.”

This increased environmental awareness is happening all over the world. For example, China has experienced a quick turnaround in its government’s views towards environmental issues and emissions, with those in charge now pushing stricter legislation. This will no doubt impact on the crushing and screening sector in the country and Guangdong based Long Ying Construction Engineering recently became the first customer in China to purchase Sandvik Mobile Crushers and Screens’QI442 HS.

This advanced HSI (Horizontal Shaft Impact) crusher is said to be able to provide accurate material reduction at high rates of throughput. Additionally, through the use of Sandvik’s modular hanging screen, it is also able to produce up to three products where and when required. 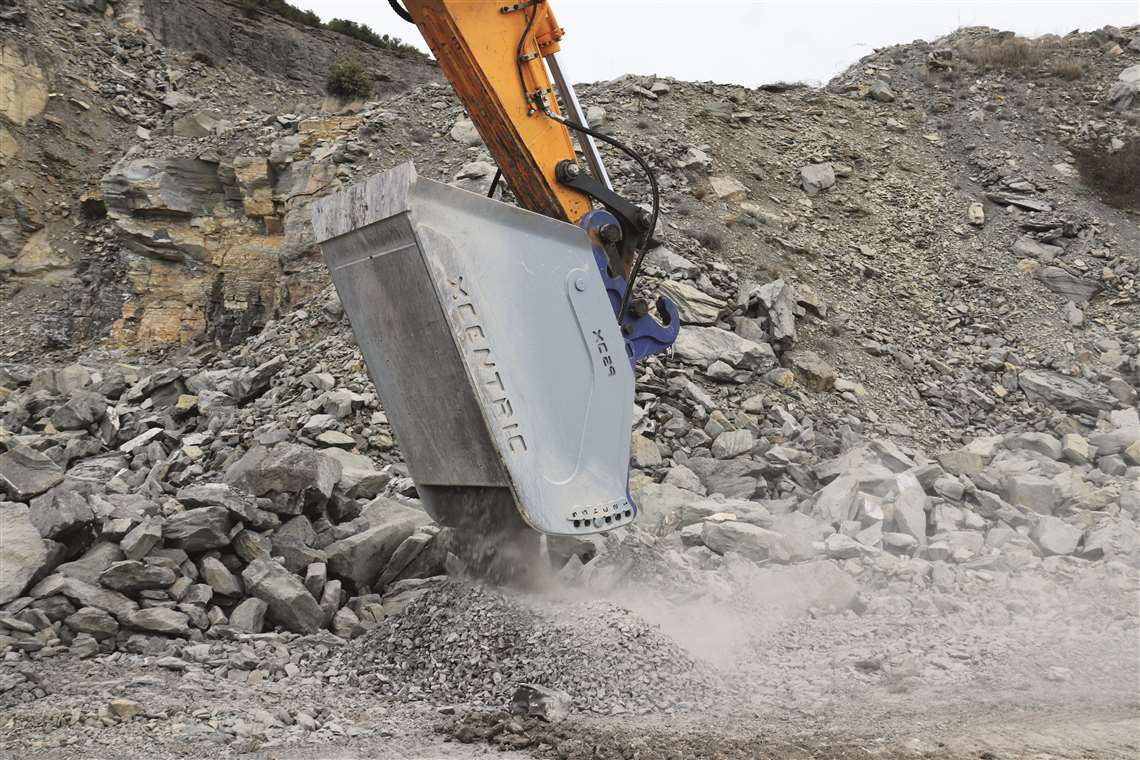 Xcentric has developed a new ‘Series A’ Crushers range, adding the XC34 this year

In order to arrive at a productive and environmentally friendly solution, Long Ying turned to POTA Environmental Technology, Sandvik’s authorised distributor. The company recommended Sandvik Mobiles QI442 HS, one of its latest developments. This provided Long Ying with a mobile crushing and screening solution with the highest environmental credentials, as well as possessing features which would enable productive and profitable use.

This requirement was based on crushing and screening mainly rocks, bricks, concrete and other materials arising from demolition and excavation projects. The combination of impact crusher with double deck hanging screen was seen as the ideal combination in order to produce aggregates for road construction as well as concrete and asphalt plants.

Long Ying is now using its crusher to crush mainly construction and demolition waste with a maximum feed size of 800mm, producing two core products: 0-10mm and 10-40mm, at an average production rate of 200tph. The latter figure, and given the ‘difficult’ nature of the material, exceeded Long Ying’s expectations. Furthermore, although initial investment costs were higher for the QI442 HS when compared with local or other EU manufacturers, the total production cost proved to be lower.

There are a host of different ways to break down the material, to crush it, with one of the most common being a bucket on an excavator. Xcentric’s XC Crusher has previously been awarded an ‘Innovation on equipment, components and auxiliary resources’ prize at Spanish trade show Smopyc and since then has developed a new ‘Series A’ Crushers range, adding the XC34 this year to its range of models for excavators from 8 to 50 tons.

This new series models are characterized by a different operating mechanics system to the previous ones, and for being simpler in terms of internal assembly.The new granulometry adjustment system offers rapid change, together with a greater possibility of output sizes.

The absence of a drain line in the hydraulic motors and the flow control valve make the equipment easily interchangeable between excavators, with a low risk of failure in case of poor hydraulic adjustment. According to the company, the maintenance-free power train increases the reliability of the machine in the long term and the replacement of the jaws in case of wear is now easier, since the bucket can be opened completely to perform this operation. 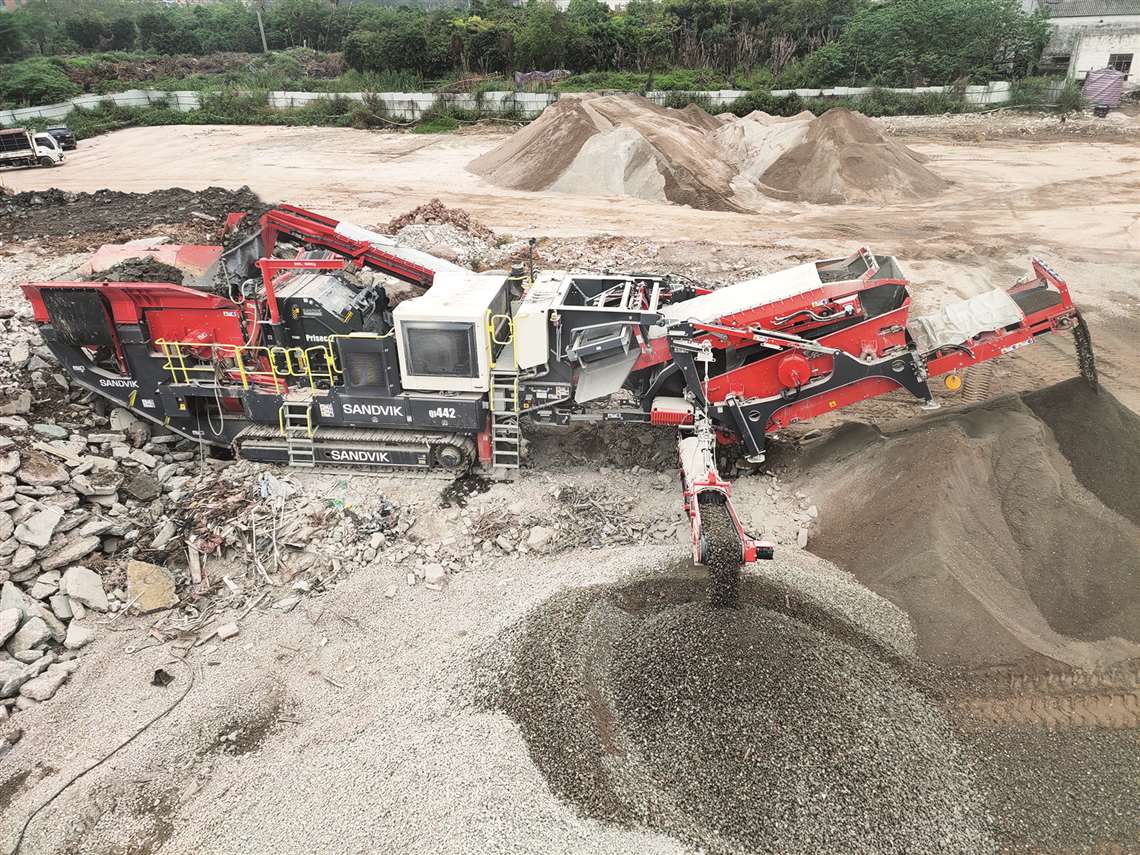 Sandvik machines are being used all over the world

For the last 30 years Allu have been producing screening buckets for the global market and the company has recently launched an innovation of its own: crusher buckets for 10 to 38 ton machines which is adjustable for 13 different discharge sizes. According to the company, placing two solutions side by side provides demolition sites with increased capacity, saving customers time and money.

The advantage of using both solutions side by side is increased capacity and resumed wear and tear for sites with up to five times the production rate. First launched in Finland and tried and tested with Nordic countries which are known for harsh environments, when a customer in Finland tested the crusher and screener side by side, it became a game changer for demolition. At this site, 85% percent was screened and also partially crushed through a screener crusher bucket (Allu Transformer DH 3-17 XHD) and only the excess very hard material was crushed with a crusher bucket (Allu Crusher AC 25-37).

“The demolition concrete was treated after pulverization with two Allus. The excess obtained from the screener crusher bucket visible at the front was crushed to a 90mm fraction with a crusher bucket. Thus, a total of about 5,000 tons passed through two buckets,” said Ilpo Ellonen, regional sales manager at Allu Finland Oy.

“The demolition of two two-story (lower floor underground) residential buildings produced a total of about 5,000 tons of concrete. The maximum fraction size achieved in the pulverization was 400 millimeters, which is a maximum good input feed size for the Allu crusher bucket. The jaw is reversable, which enables fast and easy recovery of from possible blockages. In my 30 years in the industry this has changed the direction for demolition.” 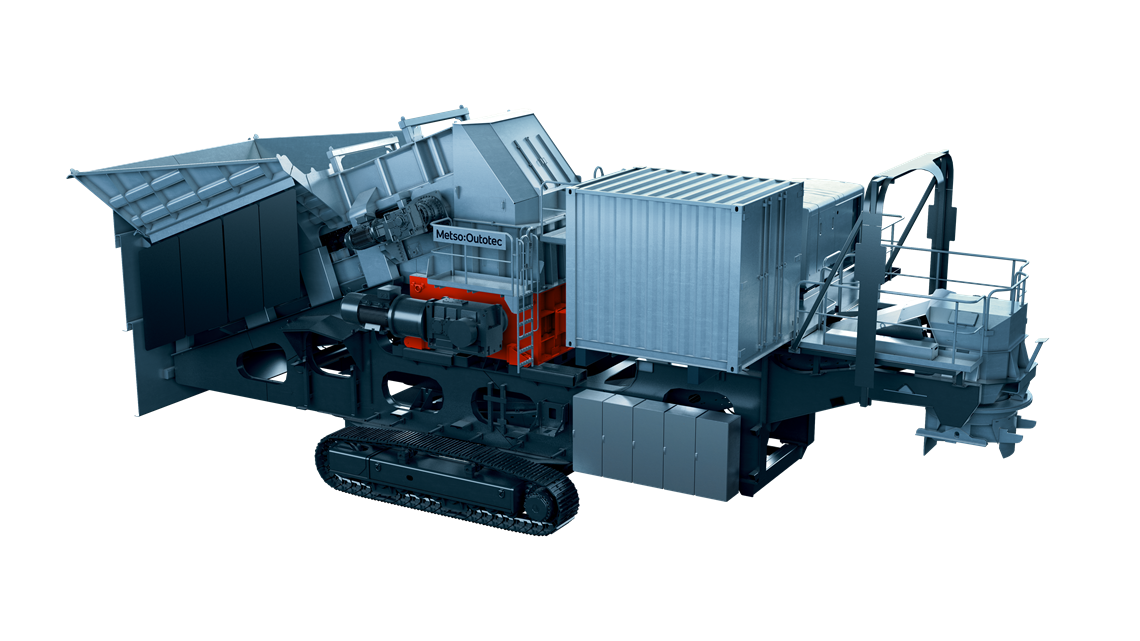 On December 1 this year Metso Outotec released a new product – the company said it was complementing its line of mobile and modular stationary crushing solutions with a sizer option specially designed for soft ore and aggregate applications.

The new additions to Metso Outotec’s mobile Lokotrack product line are equipped with Komatsu’s sizer technology, and are available in five models ranging from 500 to 4500 tons per hour. Metso Outotec’s recently launched modular FIT crushing stations are also available with sizer configurations. Both the mobile and modular solutions were engineered in collaboration with Komatsu. The first Lokotrack sizer plant is already in operation in South-East Asia.

“However, the characteristics of soft ores like low abrasiveness and high moisture content require a different equipment configuration than when crushing hard ore. To provide leading solutions for our customers processing soft ore, we’re now combining our expertise in mobile and semi-mobile crushing with Komatsu’s sizing knowhow.” 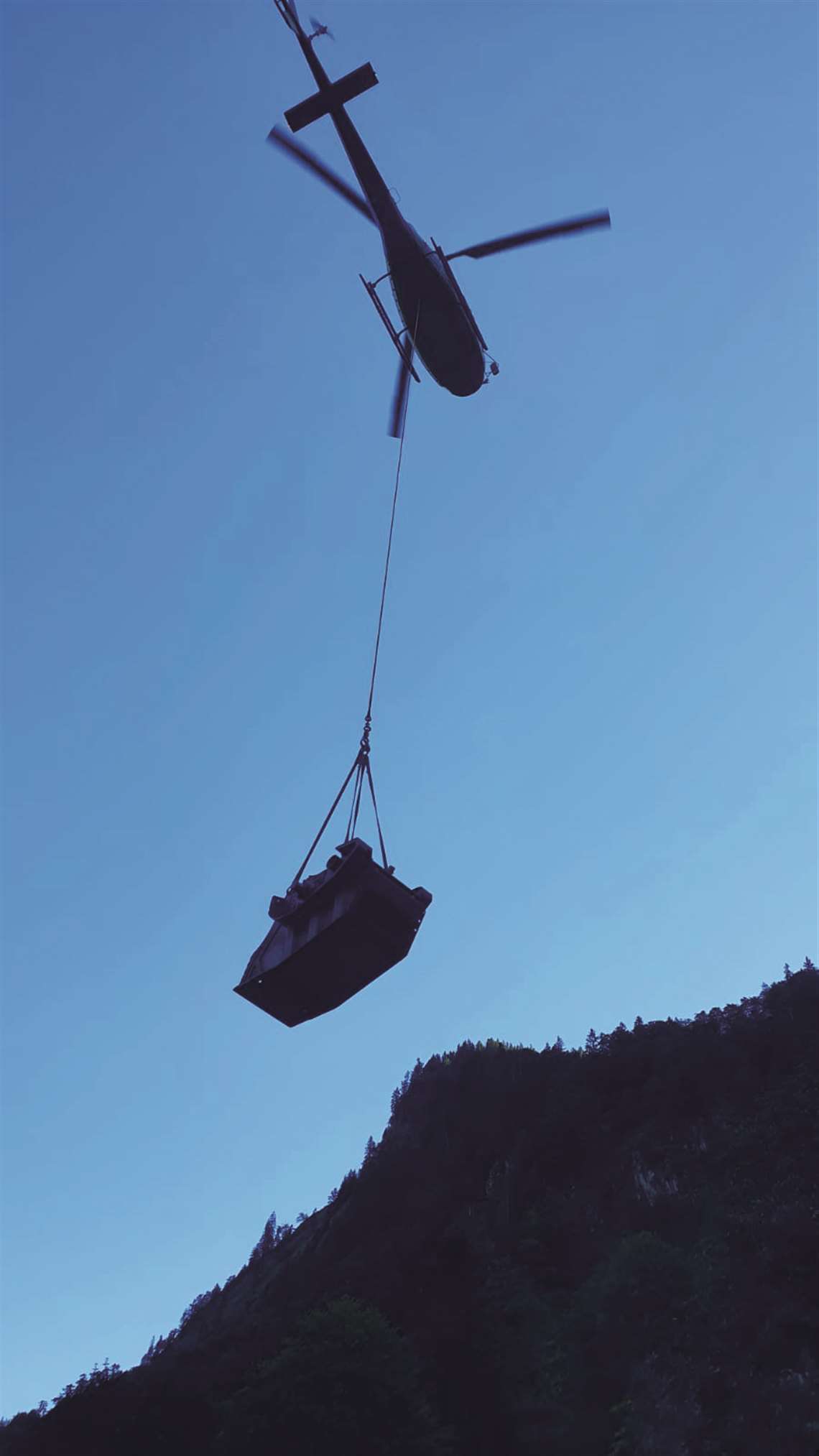 A MB mobile crusher getting a ride from a helicopter

A very unusual and interesting project story from this sector has been revealed by MB Crusher. In the Bavarian Alps in Germany a lodge at the 1,844 meters (6,050 ft) summit needed to be partially demolished and rebuilt, this is also the starting point of a very long hiking trail. Traditionally the demo waste material would have to be hauled downstream and discarded.

Solution: they used a BF60.1 MB mobile crusher to process the material and use it as road base for the surrounding paths. How did they bring it to the lodge when a helicopter can only carry a maximum of 1200 kg? A few of the crusher bucket’s heavier components were removed and then reassembled quickly on site. This resulted in significant savings on both waste disposal and hauling fees, reuse of the resulting material directly on site.

An MB crusher BF90.3 being used in a quarry in Peru

While not all solutions in crushing and screening involve something as dramatic as using a helicopter, it is clear that this sector is seeing many innovations with sustainability at its core. Another main trend in this sector – as it is in all aspects of construction – is new technology. In terms of how it is specifically influencing this sector there is obviously alternative power such as electric and hybrid but Terex’s Heagarty also points to telematics.

“While technology in the form of telematics has been around for a few years now, telematics has become more sophisticated in transforming data into information that makes life easier for equipment owners, to reduce the total cost of ownership and mitigate downtime. We have been working hard to integrate telematics with our parts and service, so that owners of our equipment have real-time visibility on what service items they need for upcoming service intervals on their machines.

“Our customers have also been using telematics to monitor work progress, manage logistics, access critical machine information, analyse and optimise machine performance and perform remote operator support, all increasing the efficiency of their operations and having a positive impact on their bottom line.” 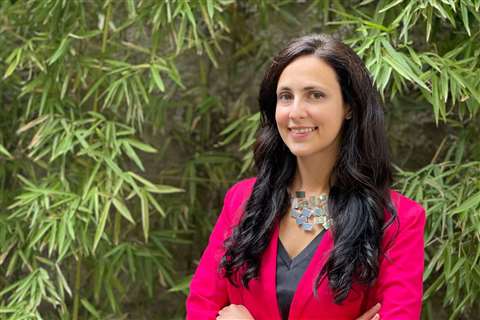 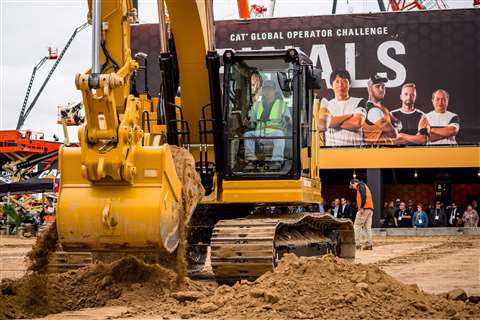 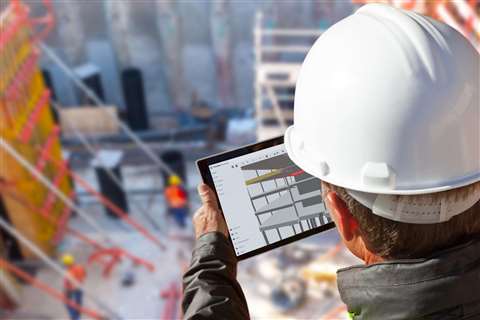