Construction in the Antarctic 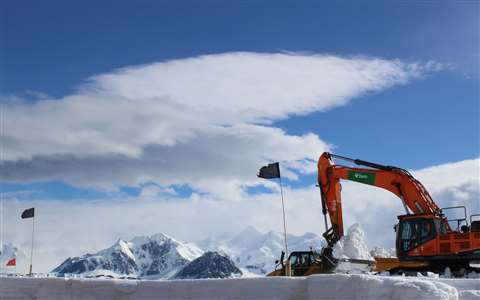 An excavator clearing snow at the runway in the Antarctic. Picture credit, S Webster

Construction is to resume at the Rothera Research Station in the Antarctic – the station is a research and operations hub that supports researchers in frontier science in the region.

The Antarctic Infrastructure Modernisation Programme (AIMP) is part of the long-term UK Government investment programme to modernise its research facilities in the Polar Regions. It aims to provide polar science infrastructure to enable the UK to deliver cutting-edge climate, biodiversity and ocean research and innovation in Antarctica.

AIMP partners include British Antarctic Survey, BAM, Ramboll and Sweco. Their extended supply chains are critical to the success of delivering projects in one of the world’s harshest environment.

Major works this season include making the 4,500m² new Science and Operations building weather-resistant and carrying out airfield improvements.

Arriving ahead of the main construction cohort, BAM’s team has started to clear several hundred thousand tonnes of snow that accumulated over the Antarctic Winter, setting the stage for the construction season ahead. The remaining construction team arrives in December following a three-and-a-half-week journey to Antarctica onboard the RRS Sir David Attenborough.

To ensure the Discovery Building’s thermal performance, the team will begin insulating and cladding, with internal works also getting underway on glazing and mechanical, electrical, and plumbing. The state-of-the-art building’s science balcony and control tower will also be installed.

The team will also begin the Runway Resurfacing project, restoring Rothera’s 32-year-old runway to its original length. This will provide an additional runway threshold, providing more room for manoeuvrability for the new BAS aircraft. The runway camber will be restored to enhance surface drainage and remove minor potholing.

David Seaton, Head of Construction at the British Antarctic Survey, said, “This is the start of the most important construction season yet for the Antarctic Infrastructure Modernisation Programme as we upgrade our facilities in Antarctica to enable the continuation of science delivery and support in this most vital region.”