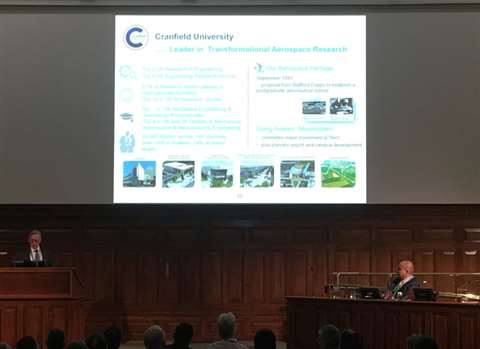 Rob Oliver, chief executive of CEA, described the need for business confidence in post-Brexit UK to be bolstered, and used the protracted debate over Heathrow Airport as an example of how the UK could be cut adrift from European business if such projects are not accelerated.

He also urged the government to address the growing skills gap in construction and engineering, saying, “We can’t just put up walls around the UK and hope we have the skills we need here”.

Oliver added that the CEA is now planning to hold a number of Brexit-specific forums in 2017.

James Angus, from the Integrated Vehicle Health Management department at Cranfield University, discussed the systems used in aerospace development, which could potentially translate to the construction industry. These included what he called “predictability and risk management”. Angus gave the example of technology currently being used in the aerospace industry to predict when aircraft components will fail.

In the second session of the morning, a panel of five suppliers to construction OEMs gave their views on current issues, and highlighted the need for supply agreements to be fair and add value in the supply chain.

In the first of the afternoon presentations, David Phillips, managing director of Off-Highway Research, gave his annual report on the global construction machinery market.

He spoke about the dual uncertainties of Brexit in the UK and the presidential election in the US.

In terms of global equipment sales, he forecast that total sales would reach US$ 89 billion by 2020 – still US$ 9 billion short of the 2007 total.

While most major markets will only slowly recover from the global economic downturn, he did highlight India as one with significant short-term growth potential.

The government of Narendra Modi, he said, was “untangling issues and giving the green light to major projects”.