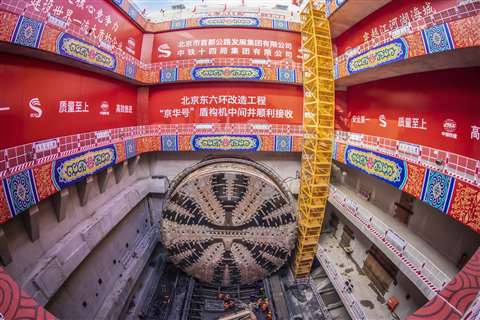 A breakthrough has been made on the Beijing East Sixth Ring Road Reconstruction Project in China by the CRCHI mega slurry tunnel boring machine (TBM) ‘Jinghua’.

‘Jinghua’ is reported to be the largest shield machine in China with a maximum excavation diameter of 16.07m. The length of the whole machine is 150m, and the total weight is 4,300 tons.

The tunnel length is 7,338m and its geology is complex; it is mainly composed of sandy soil, water-rich and high-density sand, interactive layers of silt and cohesive soil.

The project also faces other construction difficulties, such as deep soil cover, and a sensitive environment.

The slurry TBM has successfully excavated 4,772m and reached the intermediate air shaft after 16 months since its initial excavation overcoming technical difficulties, such as the initial excavation with shallow overburden and long-distance crossing high-density sand layers. Its record excavation in a single month is 542m.

The TBM will carry out a second excavation after inspection and maintenance in the intermediate air shaft, and will continue to excavate 2.6 kilometers forward to reach the receiving well in Wansheng South Street.