In a recent research briefing on Asia, BIS Oxford Economics said that there was huge potential for growth in the Asian construction sector over the next ten years. 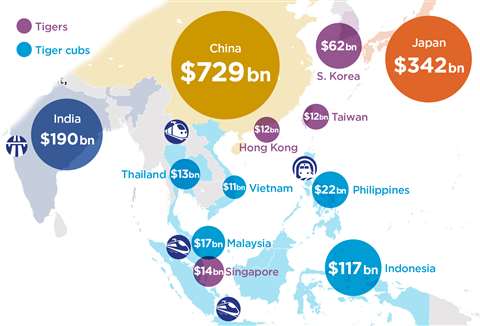 Average construction investment, 2015-2021, in billions of US dollars

It was suggested that this would be fueled by the growth in ASEAN’s (Association of Southeast Asian Nations) Tiger Cub countries – especially Indonesia, Malaysia, the Philippines, Thailand and Vietnam, which are leading the race to build.

Heavy infrastructure investment will be necessary in order for them to maintain their strong growth trajectory and fulfil their economic potential.

Across the region, governments were said to be embarking on ambitious infrastructure construction programmes that had, until now, been hampered by public finance constraints. The revived growth in the region has given them a stronger foundation to work from.

This growth was said to be buoyed by the region’s evolution as a key manufacturing hub – both regionally and globally – despite the increasing incomes of the ASEAN region’s 639 million people, which are in fact expected to fuel demand and further growth.

As a result, a strong flow of inward business investment has been attracted from both local and multi-national manufacturers, who subsequently stoke demand for commercial and industrial buildings, as well as improved transport connectivity.

Further to this, rapid urbanisation and an under-supply of housing across the region mean that there is a huge requirement for new built structures, beside infrastructure.

The Asian region’s construction sector reached US$1.4 trillion in 2016, measured by gross value-added (GVA) in real terms. This compared with the US sector’s GVA of $648 billion, and $831 billion for the EU sector’s combined GVA in the same year.

Over the next five years, construction investment in Asia is predicted to average $1.61 trillion annually. This outstrips comparable data for Europe and the US – $697 billion in the US, and $890 billion in the EU.

It is expected that the public sector will turn to public-private partnerships (PPP) in an effort to fill gaps in available public financing for what will be high-cost, capital-intensive mega-projects.

The positive prospects for the region’s construction industry are further underpinned by China’s ongoing external investment in construction programmes.

Aside from exporting construction technology to the ASEAN region, China is also driving the progress of its One Belt, One Road (OBOR) initiative, to connect China with Europe through Central Asia, Southeast Asia, South Asia and Africa.

The Southeast Asian region was described as a pivotal element in the OBOR initiative. China has the financial muscle to develop these projects aggressively, and countries lacking in resources are eagerly embracing them.

Meanwhile, India’s construction sector investment currently stands at around $130 billion a year, making it the third largest in Asia, after China and Japan.

Over the next five years, India’s annual construction investment is expected to jump by almost a third, averaging $170 billion a year, adding still more impetus to an Asia-wide building boom that looks set to last through the next decade and beyond.