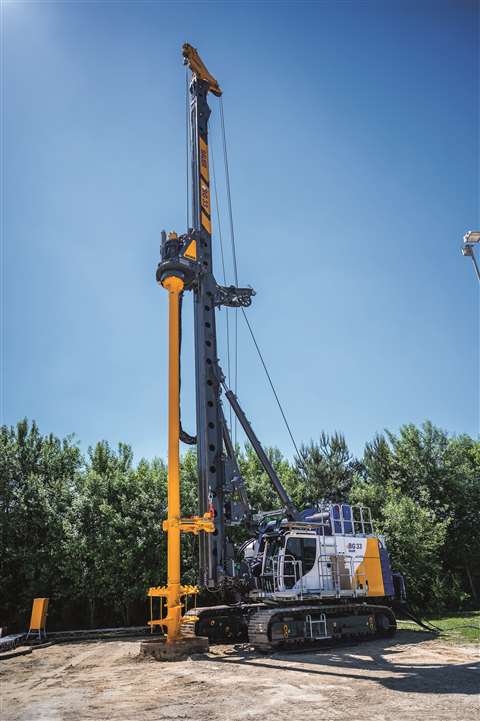 Bauer has unveiled the first electric drilling rig produced by the company, the eBG.

As the drilling rig uses electrical power instead of a diesel engine it does not require any fossil fuels and operates quietly, making it suited for use in urban environments.

“We have been working with electrification for some time now,” said Christian Heinecker, head of the Drilling Equipment division at Bauer Maschinen GmbH. “In the past, however, this was tailored to specific customer requests or projects.”

Previously, electrification of Bauer equipment has only been applied in specific cases, such as the Dive Drill, a drilling rig operated from ships for underwater drilling in which electrically driven hydraulic power packs were installed.

400kW
The new eBG 33 falls in the mid-range segment of the drilling rig series with a drive power of more than 400kW.

The drilling rig is said to cover a wide range of applications on site; apart from classical Kelly drilling, it can be used for high-performance methods, for example soil mixing techniques such as cutter soil mixing or double-head system drilling. It is even possible to attach a Bauer trench cutter.

Bauer says that the eBG 33 can significantly reduce operating costs, as diesel consumption is typically very high for this size of equipment.

To deliver the same capacity as a conventional Bauer BG with a diesel engine, the eBG 33 was developed using a direct power supply solution. The currently available battery systems would not be able to manage the capacity in this size class, therefore preparatory work on site must be planned over a number of months to ensure that the power supply is also provided.

The eBG 33 is designed to be best suited on large-scale and long running construction sites, since the overall benefits, such as significantly reduced operating costs, can be fully exploited over the longer period of time.

The electric engine requires 690 volts, while 400 volts are required for air conditioning and heating. In addition, a 230 V socket provides the option of plugging in additional attachment parts on site, such as percussion tools. The on-board controls require 24 volts as usual.

“Electrification has entered our standard portfolio in the form of individual products as well as deep drilling technology,” added Christian Heinecker.