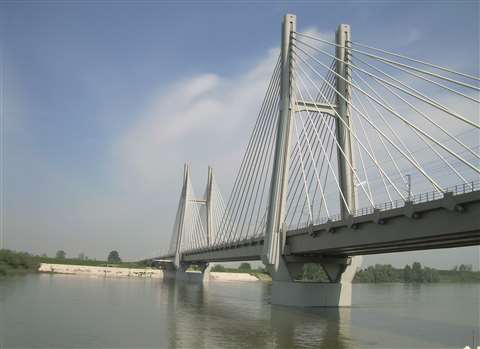 Of the approximately 14,000 large-scale infrastructure projects which GlobalData tracks, the power sector has the most projects in the pipeline with 5,681.

However, this is closely followed by the road sector with 4,004, and railways with 1,945. When it comes to value, rail projects dominate, with these projects valued at approximately US$5.4 trillion and roads at US$2.6 trillion.

The most notable road expansion in terms of total length is taking place in South and South East Asia, with a total of 59,835km of ongoing and upcoming road projects across the region. A total of 160,198km of railway track will be undertaken and completed in the next five years.

The High-Speed Railway system has been one of the major infrastructure investments in Italy in recent years. Saipem has acted as General Contractor leader of two consortiums for the delivery of high-speed engineering, procurement and construction (EPC) turnkey projects, including bridges and viaducts. 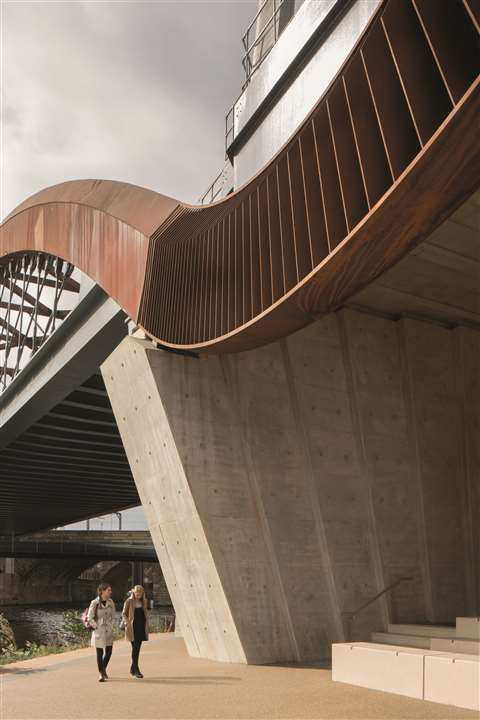 Ordsall Chord is a new rail connection between Manchester Piccadilly, Oxford Road and Victoria Stations in England. The £32 million (US$39 million) viaduct provides significant improvements in network capacity, resilience and connectivity. Knight Architects worked with the AECOM Mott MacDonald joint venture in order to deliver the design of BDP’s architects.

The concept was for a ‘ribbon’ connecting two structures of the Orwell Network Arch and Trinity Way Viaduct. Where the two structures meet, the ribbon ‘cascades’ below deck, allowing one structure to visually flow into another.

The ‘cascades’ sat between two different structures, with unique cross-sections and alignments, resulting in complex 3D geometry. The team worked to resolve the 3D curvature into buildable form, developing the model together to serve both fabrication and visual purposes.

With space tight in urban environments, it is often necessary to have transport links underground, such as in Bangkok, Thailand, with the expansion of the Bangkok Metro (MRT).

The existing metro lines, which are marked with the colours blue and purple, cover 35 stops over a distance of 45km. In addition to the current expansion of existing lines, another line is now under construction: the MRT Orange Line. 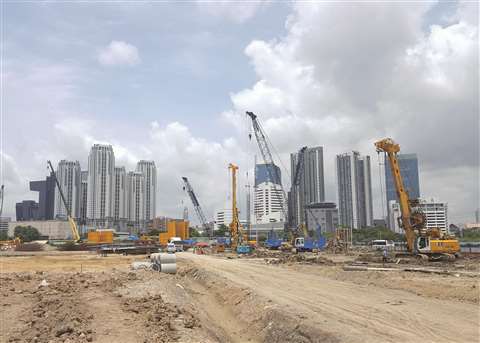 Thai Bauer is working on a new underground line in Bangkok, Thailand

“The challenges of this project are diverse,” said Mike Sinkinson, managing director of Thai Bauer. “First of all, extremely stringent tolerances for the installation of the bored piles have to be kept, while work is required to be carried out above existing tunnels, so great care and accuracy are essential for the success of this project.”

The completion of the new Orange Line is expected to take place in 2022.

Another transport project involving underground construction work is happening in Australia, where five 1,000 tonne tunnel boring machines (TBMs) are working under Sydney in what is said to be the largest tunnelling effort in Australian history.

The machines, overseen by an integrated team including Bechtel, are building tunnels below the city’s central business district and digging the first-ever rail tunnels under Sydney Harbour for Sydney Metro.

As Sydney Metro’s Delivery Management Partner, Bechtel is overseeing the delivery of the tunnelling contract which was awarded to a John Holland and CPB Ghella Joint Venture in 2017. In addition to building twin tunnels with five TBMs, the team is excavating six new stations within the heart of the city.

In Europe, Ammann ARS 200 and ARS 220 Soil Compactors are utilising smart technology on a rail project between Stuttgart and Ulm in Germany. 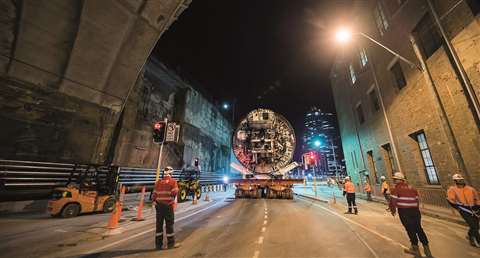 Bechtel is involved in the largest tunnelling effort in Australian history

The compactors are equipped with Ammann’s proprietary ACEforce Intelligent Compaction system,  which measures compaction and assigns specific values to progress through a digital display, as well as being able to confirm that compaction targets have been met. The machines are also utilising the Q Point data gathering system as they work on a new section of track for Germany’s high-speed (ICE) trains.

The contractor handling compaction on the project is Vinci Construction Terrassement, which is responsible for the construction of a section of the high-speed line between the Stuttgart airport and Wendlingen. The construction required earthworks for a 5.4km track and 7.5km of side roads. The project is ongoing and expected to take 24 months to complete.

It is possible to record all relevant values, such as the number of passes, machine position, travel speed and rigidity values of the compacted area. Data displayed on the screen can be transmitted in real-time to the central computer.

The site manager can supervise and document the entire compaction process. In addition, the supervisor can provide the driver with information on the bearing capacity of the terrain or give direct instructions to make the compaction process more efficient.

There are many new airport constructions ongoing around the world, with one of these taking place in Hoima, Uganda. The airport will be constructed by contractor Colas and SBI International Holdings.

The airport will have a 3.5km single runway and works include the construction of drainage facilities, sidewalks, security fences, air traffic control towers, cargo terminals and staff housing.

The project will last for three years, from May 2018 to May 2021 and is part of China’s BRI (Belt and Road Initiative). Original equipment manufacturer XCMG sent over 20 units of road machinery including vibration rollers, light rollers, bulldozers, loaders and dump trucks to assist the project. With a tight project schedule, the average working time for each equipment is more than ten hours per day.

Upon completion, Hoima International Airport will provide transportation of people and supplies for oil and gas projects close to Lake Albert and western Uganda.

In a tightly scheduled, large-scale project, a runway at Salzburg Airport, Austria, was recently refurbished. The concrete runway from the 1960s remained as the foundation for the new covering layer consisting of around 120,000 tonnes of asphalt. Part of this giant project was the core drilling of more than 800 holes for the runway illumination as well as 10.8km of floor cuts.

Three special construction companies worked simultaneously in order to finish the works on time: Possehl Spezialbau, ÖBA and OAT. With regards to diamond tools and on-site support, they referred to Tyrolit as their professional partner.

Key to the renovation was to maintain the current concrete runway as a base layer, and thus avoid an extra 4,000 truck rides for its removal.

With a beheading machine, the 45m wide runway had to be divided into smaller concrete panels, which acted as a tension-free base layer. This required over 10.8km of preparative floor cuts with a width of 1mm and a depth of 300mm, amounting to 240 cuts of 45m each in a time span of only five days.

The project is reported to have difficult environmental conditions, with around 80% of the area along the railway dominated by mountains and plateaus and the railway crossing the large Mekong River twice.

“Since we worked under all conditions during the dry season, our engineering machinery and equipment had to work under full load conditions. 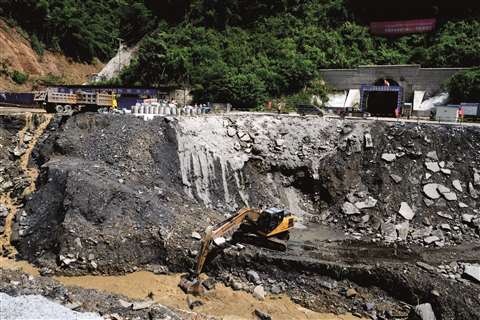 “Lack of oxygen in the tunnel, narrow working area, continuous high temperature and high altitude are big challenges for the engineering machinery and equipment,” said manager Li, the Principal of Sha’nenshan No. 1 Tunnel and Sha’nenshan No. 2 Tunnel.

Due to the complex geographical and climatic conditions the construction equipment used had to be adapted to meet these challenges. Among the equipment employed was a new-generation excavator, the CLG922E; its upgraded hydraulic system was said to be fully adaptable to the harsh environment.

Equipment has been specifically developed for this sector, such as Liebherr’s A 924 Rail Litronic mobile excavator. The machine, which has an operating weight of between 21.8 and 25.0 tonnes, can be used as a railroad machine optionally on the road as well as on railway tracks.

The A 924 Rail is equipped with a frictional wheel rail guide for a wheel base of 1.435mm. The machine has a bank angle of 20 degrees, and therefore a changeover between wheels and tracks in the field is possible. The equipment consists of an adjustable 5.05m boom and a 2.05m stick.

The Liebherr A 924 Rail has a number of standard features to ensure maximum site safety, including braked track wheels and pipe break protection on the hoist cylinders, as well as on the adjustable cylinder and on the stick cylinder. 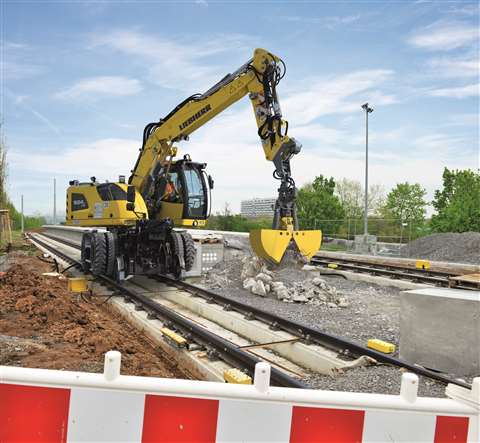 Elsewhere, it has been announced that Pettibone,  manufacturer of the Speed Swing rail maintenance crane, has announced a partnership with Mecalac to provide sales and service support in North America for the Mecalac 8MCR Rail-Road, a compact crawler excavator that is built with factory-installed hi-rails for railway maintenance and service work.

In addition to digging, the 8MCR is also designed to provide outstanding lifting and handling functions for its size class with appropriate attachments. It has a 3-piece boom with integrated offset that is designed for rail jobs.

Transport projects have their own unique challenges for both contractors and machine operators alike.

Wilbert Blom, product specialist, excavators, Hitachi, comments that one of these is the tight time frames the projects often have.

“The main challenges would be tight deadlines. Very often airports work on one section while keeping another section open, so it’s important that deadlines are not extended and for this you need equipment you can rely on with low running costs,” he commented.

Transport construction projects may be getting more ambitious than ever before, but the need for productivity and efficiency is the same as it has always been.

Thanks to the new technology being used by original equipment manufacturers the next-generation of  equipment is able to handle tougher challenges than ever before. 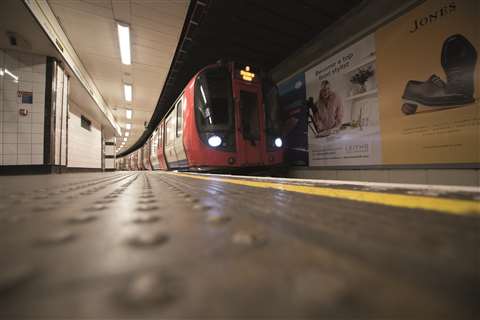 The four parties worked together to fuse aggregated and anonymised mobile network data with a diverse range of complementary data sets to better understand travel patterns across London. This project helped reduce the need for paper surveys to understand the pattern of where people are travelling.

Advanced Big Data analytics were then used by Jacobs to understand and identify trends from the combined data, providing a detailed understanding of how people use the city’s transport network at various times of the day. This is being used in TfL’s strategic models – allowing planned transport investment to be more accurately focused on where it is most needed to reduce delays and increase capacity.

“With London’s population currently at 8.8 million, and forecast to grow to 10.8 million by 2041, it is important to leverage the power of new technology to help TfL address the transport challenges facing the city,” said Donald Morrison, Jacobs Buildings and Infrastructure Europe, senior vice president.