The biggest tunnelling projects around the world in 2021

Lindsey Anderson reports on how new infrastructure projects are reshaping the world, following the widespread impact of the Covid-19 pandemic on the tunneling sector.

There’s no denying the global effect of the Covid-19 pandemic on the construction industry. Jobsites across the world stalled despite many projects deemed ‘essential’, and the market scrambled to figure out how to best protect its workforce.

What are the biggest challenges for the tunnellng sector?
The tunneling sector reports a mixed bag of issues and trends as the world reopens and work resumes. Factors include ageing infrastructures, climate change concerns, filling labor shortages, a general lack of funding, the need for equipment that can handle larger-diameter tunnel work, and Elon Musk. Many wonder if the South African-born entrepreneur’s Boring Company could yet become an industry disruptor.

The industry is also grappling with the long-term consequences from the Covid-19 crisis. Should increased working from home business models lessen public transit ridership and traffic in urban areas, therefore reducing demand for underground work? How does the industry address the need to reduce the number of people in close proximity to each other, especially when below the Earth’s surface?

Contractors have navigated job safety analyses to update procedures in relation to work and Covid-19. Masks are required by some companies, physical distancing is enforced and crews have also been staggered with limited exposure to each other.

Some of the biggest news for tunneling and construction companies in the US was the recent unveiling of The American Jobs Plan from President Joe Biden. This US$2 trillion infrastructure scheme is aimed at creating jobs and rebuilding the country’s sagging infrastructure.

The Administration plans to spend US$621 billion on modernising US surface transportation networks, US$111bn for clean drinking water, US$100bn on broadband, US$25bn for airports plus US$17bn on inland waterways and ports.

While most of the largest US contractor associations agree the plan is an important step forward, many paused to reflect on key areas of concern.

The Associated Builders and Contractors (ABC) noted that while the plan allocates US$621bn for ‘transportation infrastructure,’ a large portion of the funding (US$174bn) is for investment in spurring the electric-vehicle market. An additional US$165bn is dedicated to repairing public transit vehicles and freight rail, leaving approximately only US$282bn for the nation’s roads and bridges – a fraction of what is needed to truly fix the nation’s transportation infrastructure.

The largest crossover Tunnel Boring Machine in China
The biggest ever Crossover (XRE) TBM to be used in China debuted in Guangzhou in March 2021. The 9.16m-diameter Robbins TBM, which took five months to assemble, is being used by contractors Sichuan Jinshi Heavy Equipment Leasing Company and CREC Bureau 2. 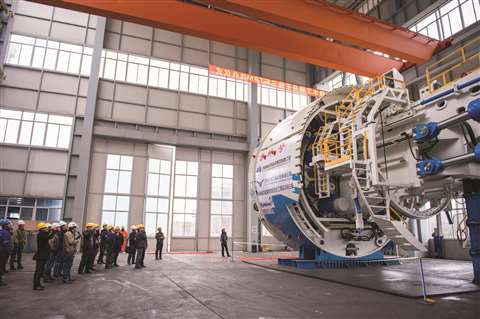 The hybrid machine is boring the 2.5km-long Pazhou Line Lot PZH-1 of the Pearl River Delta Intercity Railway Project, which will offer better commutes for Guangzhou residents travelling to and from University City.

Yongsheng Qi, project manager for Robbins China, stated, “Not only are there poor ground conditions such as soft to hard uneven, fractured zones and full-face hard rock, but these sections appear to alternate frequently – which is the biggest challenge of the project. It will be a test of performance and tunneling efficiency for the machine.”

The tunnel is also expected to cross under rivers and other bodies of water with a cover of 20m to 31m. The ground strata connects to the river and is highly permeable, resulting in expected water pressures above 7 bar. The project’s success lies in stabilising the water pressure at the face, while ensuring acceptable advance rates and construction safety.

The Crossover TBM features both hard rock and Earth Pressure Balance (EPB) modes and is optimised for the rapidly changing ground found on the project. An adaptable cutterhead design and two-speed gear reducers known as the Robbins Torque-Shift system enable efficient tunneling in hard, mixed, and soft ground.

The Pearl River Delta tunnel is scheduled to be completed by the end of 2021 and to be operating in 2023.

Large-scale sustainability project in Central Europe
The 64km-long Brenner Base Tunnel (BBT), being built under the direction of Austrian-Italian BBT SE, will become the longest underground rail link in the world once completed. It crosses beneath the Alps between Innsbruck in Austria and Franzensfeste (Fortezza) in South Tyrol/Italy as a particularly efficient flat trajectory (low gradients.)

The tunneling team, a consortium of Austria’s Strabag and Italian contractor Webuild, recently completed a 16.7km-long part of the high-capacity BBT project. This tunnel will provide a connection between the Italian city of Verona and Munich in Germany through Innsbruck.

Martin Herrenknecht, founder and chairman of the board of management of Herrenknecht, said, “61 meters and four centimetres in just 24 hours with a modern Gripper TBM – the tunnellers at the Brenner Base Tunnel were able to set a new record in hard rock tunneling.”

The largest tunnel boring machine (TBM) ever used on a UK rail project is achieving key milestones. The 170m-long TBM machine from Herrenknecht, dubbed “Florence”, is the first of ten TBMs that will dig a total of 103km of tunnels for phase one of the HS2 network that is the most expensive infrastructure project in Europe.

TBM Florence, weighing in at 2,000 tonnes, was launched from the project’s South Portal site, next to the M25 motorway in Buckinghamshire.

Two identical TBMs were built in south-west Germany by Herrenknecht, transported in 300 separate shipments before being reassembled at the Buckinghamshire launch site. The pair have a three-year plan to dig the tunnels and line them with concrete wall segments, at a rate of up to 15m per day.

TBM Florence has a 17-strong team onboard, with a further 100 more supporting the process on the surface. Phase one of the project, set for completion between 2028 and 2031, will connect London and Birmingham, with trains expected to run at speeds of up to 400km/h. The full network, running to Manchester and Leeds, will not be completed until at least 2035.

UK transport secretary Grant Shapps explained, “The launch of the first giant tunneling machine on HS2 is not only a landmark moment for the project, but the ground-breaking evidence that shows our commitment to levelling up transport links across the UK, supporting thousands of jobs and hundreds of apprenticeships in the process.”

It delivers a comprehensive module for digitalisation of tunnel construction and further optimisation of related processes.

The tunneling solution can be run on a Trimble TSC7 data collector or T100 table, with the streamlined workflows deemed easy to use for non-geospatial professionals.

The designs from the Amberg Tunnel office software can be transferred to Amberg Navigator, either directly or using the Cloud. The data collected is sent for detailed analysis, where inspection maps and reports can be produced as final deliverables.

Ron Bisio, senior vice president of Trimble Geospatial, said, “Partnering with Amberg Technologies will provide our customers with an industry-leading tunneling solution to increase productivity when working in underground tunneling and mining environments.

”The domain rich and easy-to-use Amberg solution, in combination with our Trimble S Series, can increase confidence in the field and streamline deliverable creation.” 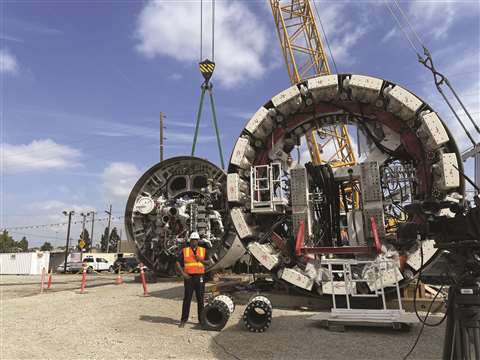 The Clearwater Project is the result of a multi-year planning and environmental review effort to ensure the reliability of the LA County Sanitation Districts’ main sewer system, which serves more than five million people. This system’s largest wastewater treatment plant uses two tunnels, which are over 60 years old, to convey cleaned water to the ocean.

The planning effort identified the need for a new tunnel to ensure the reliability of this critical part of the sewer system. The new 5.5m-diameter, 11km-long tunnel will address concerns about the integrity of the existing tunnels, earthquake resilience and capacity. Tunneling will start this summer and finish about four years later.

The seven-mile tunnel will be constructed by a Herrenknecht slurry single pass TBM, beginning at the JWPCP Shaft Site (entry shaft) and ending at Royal Palms Beach (exit shaft), to protect local waterways by addressing aging infrastructure. The tunnel alignment will vary in depth from approximately 15m to 137m below the ground surface.

Kogarah-Arncliffe tunnel given green light
The Sydney Morning Herald reports that the New South Wales (NSW) will push ahead with a AUD$2.5bn (US$1.93bn) motorway tunnel between the southern Sydney suburbs of Kogarah and Arncliffe, although doubt remains over a future extension south.

NSW Transport Minister Andrew Constance declared that the government had signed a contract for stage one, which involves tunneling four kilometres between President Avenue in Kogarah to the WestConnex Motorway in Arncliffe. Construction on the twin tunnels will begin in early 2022 and be completed by 2025.

Asked whether the Australian government still intend to extend a second stage of the M6 motorway, Constance replied, “As part of doing our homework we’ll work out where we’re going to build it to.

“When you build a project like that you’re going to obviously cause enormous disruption and we’ve got to work through that. We’ll come back to you where we’re going to build it to. ” 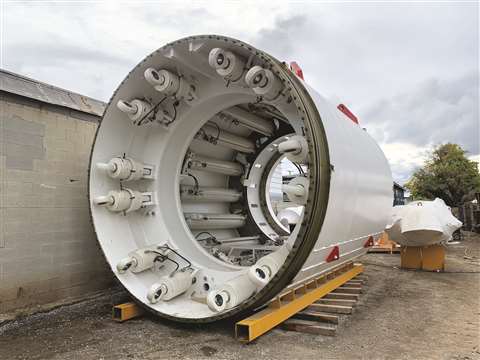 The system, built by Musk’s underground construction business The Boring Company, originally called upon the use of a TBM from Canadian manufacturer Lovat Inc.

But Musk has debuted his own TBM, the “Prufrock”, which he claims is designed to tunnel at a speed of more than one mile per week.

According to The Boring Company, TBM Prufrock launches directly from the surface and can begin tunneling within 48 hours of arrival onsite.

The Boring Company claimed, “Prufrock is designed to construct mega-infrastructure projects in a matter of weeks instead of years.”

The Boring Company’s proposal for a beach-to-downtown tunnel in Fort Lauderdale, to be called “The Las Olas Loop”,  has just been accepted by city officials.

The tunnel would stretch for 2.5 miles and is likely to cost between US$10m and US$15 million per mile, with the total expenditure dependent on whether there are two tunnels of one heading in each direction.

Q&A with Padley and Venables
Padley and Venables Ltd is the UK’s manufacturer of tools for use in the construction, civil engineering, demolition, mining, quarrying, rock drilling and tunneling industries. Glyn Storey, marketing manager at the Sheffield-based company, answers a few questions from ICON. 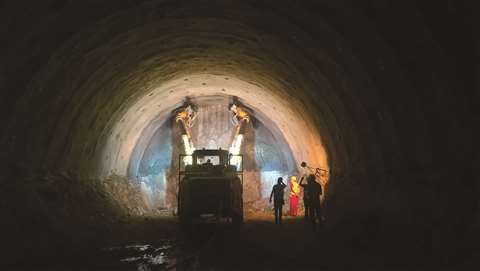 Padley and Venables provided equipment at the Vjeternik Tunnel, the longest tunnel of the Bar-Boljare Highway Project in Montenegro
ICON: Globally, where are you seeing high demand for your equipment?
Glyn Storey: There are many different projects going on globally, ranging from the extension and doubling of road and rail tunnels in addition to Hydro Electric Water projects.

ICON: How has green and electric power been adapted within the industry?
GS: More and more projects are moving towards the development/implementation of electric and remotely-powered vehicles, controlled by an operator sometimes a mile away. This is much better for safety, less pollution [no diesel fumes] and if a rock falls, etc. So it would only affect machinery, meaning no injuries or loss of life to operators.

ICON: How was the industry impacted by the global pandemic? And how do you see the tunneling market playing out over the next year?
GS: We have been almost as busy as usual globally across most markets, which is great. There are many global projects on the go that we are involved in. We expect a steady upwards growth on most new up-and-coming projects.
Global Equipment Projects In-Ground Tunnelling Tunnelling Construction