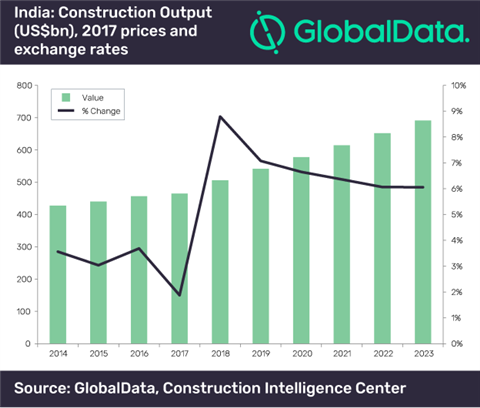 The Indian construction industry is predicted to grow at an average rate of 6.4% between 2018 and 2023, according to GlobalData.

In other news related to the Indian construction industry, Off-Highway Research recently revealed that sales of construction equipment, including mobile cranes, grew 35% in India last year.

This was the third successive year of robust growth and took the market to a record high of 98,204 units. This level of demand was some 44% above the previous market high, seen in 2011.

GlobalData reported that positive developments in economic conditions, improvement in investor confidence and investments in transport infrastructure, energy and housing projects helped the Indian construction industry grow 8.8% in 2018, up from 1.9% in 2017.

If the Indian construction industry grew at the predicated rate of 6.4% a year between 2018 and 2023 it would have a value of approximately US$690 billion.

Infrastructure projects have been a key part of the Indian government’s strategy for growth. In the 2018–2019 budget, the government increased its expenditure towards infrastructure development by 20.9% from INR4.9 trillion (US$75.9 billion) to INR6.0 trillion (US$89.2 billion).

Residential construction is expected to remain the largest market over the forecast period, accounting for 30.1% of the industry’s total value in 2023. 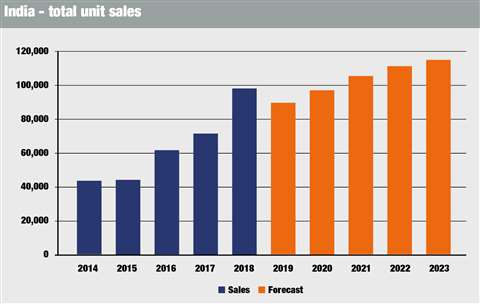 The data provided by Off-Highway Research revealed that, regarding construction equipment segments, the growth in 2018 was mainly due to backhoe loaders. This segment leapt from 32,728 units sold in 2017 to an unprecedented 45,552 machines – a near 40% rise.

In addition, the Indian crawler excavator segment saw strong growth last year, with sales rising 27% to more than 25,000 units. Notwithstanding the continued popularity of the backhoe loader, crawler excavators are becoming increasingly important in the Indian construction industry and are selling in volumes which have never been seen before.

Off-Highway research forecasts an 11% decline in sales this year due to the disruption that the general election will cause. However, the longer-term trajectory for India is for growth in equipment sales, with demand expected to surpass 100,000 units by 2021.