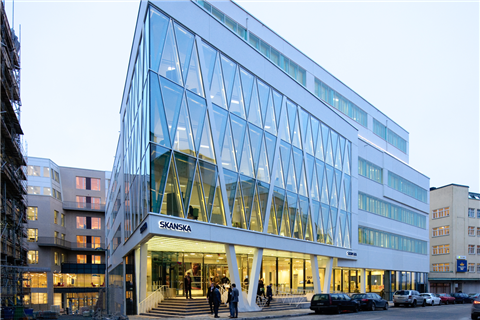 Skanska has announced a significant ramping up of its carbon emissions target, with its sights now set on a 70% reduction by 2030.

The Swedish construction giant previously set a goal of a 50% reduction, measured against its own 2015 levels.

Skanska said the ambitious update was in part a response to a recent report from the Intergovernmental Panel on Climate Change (IPCC) which said an increase in the pace of carbon emissions reduction was urgently needed.

The company added that it was also in a position to move forward with the new target, having already successfully achieved a reduction of 40% within its own operations, while simultaneously seeing revenues increase across the group.

Anders Danielsson, CEO of Skanska AB, “Goal-oriented initiatives in all markets now show that we are highly successful in our efforts toward achieving carbon neutrality by 2045 throughout the value chain. We are now increasing the pace by tightening the interim target. By offering climate-smart solutions, we are helping our customers to meet their climate targets. The work on minimising our greenhouse gas emissions goes hand in hand with increased efficiency, better use of resources and lower costs, as well as meeting our customers’ needs.”

Lena Hök, the company’s senior vice president of sustainability, said, “The large amount of emissions originates from production of materials such as concrete, steel and asphalt, as well as the use of our buildings. Achieving the goal of becoming carbon neutral requires innovation and partnership with various players. We also want to see more stringent climate requirements in public procurements.”

How electrification is heating up race to meet emissions targets
The move to electric-driven access equipment seems inevitable but the journey is not necessarily straightforward.