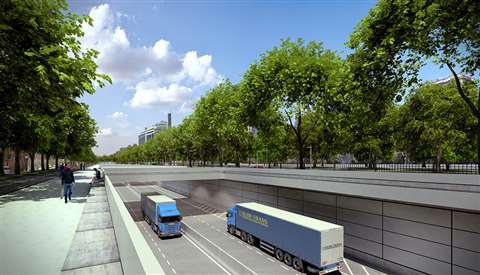 Work is underway on a 7.1km road corridor, called Paseo del Bajo, that will improve connections between the north and south of Argentina’s capital, Buenos Aires.

The US$650 million project will include the construction of 12 lanes – six in each direction – with four of them exclusively for heavy goods vehicles and long-distance buses, and the remaining eight lanes for light vehicles. It will also involve the creation of six hectares of green space.

By connecting the Illia highway with the Buenos Aires-to-La Plata highway and introducing links to the port and the Retiro bus terminal, it is estimated that the new road will reduce transfer times across the city by 40 minutes, while also improving safety. It was said that at least 25,000 vehicles per day would benefit from the improvements.

Funding from the Autonomous City of Buenos Aires and the Argentinian government will be supplemented by a loan from the Development Bank of Latin America, CAF.

The works are being carried out by state-owned Autopistas Urbanas and the Old Puerto Madero Corporation, on behalf of the Ministry of Urban Development and Transportation of Buenos Aires.

The road is scheduled to be in operation by April 2019.

Watch a video about the project here