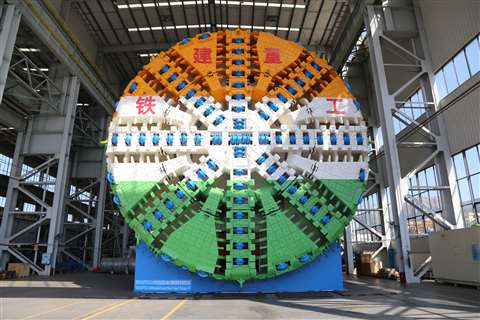 This 12.19m diameter TBM, made by CRCHI, will be used in the Mumbai Coastal Road Project

India’s largest diameter tunnel boring machine (TBM) was recently packed at China Railway Construction Heavy Industry’s (CRCHI) industrial park in Changsha, China, and will pass through Shanghai Port to Mumbai where it will be used for a costal road project.

It is said to be the largest diameter TBM among all Chinese TBMs exported to India and the largest one ever in India.

The Mumbai Coastal Road Project is a key project in India, with the 29.2km coastal road connecting Marine drive to Kandivali.

The CRCHI Slurry TBM will bore a tunnel section of 1,920m. The tunnel construction faces complicated geological conditions that require excavation in deep overburden and will pass through a compound stratum of basalt, breccia and shale.

To solve the challenges, the CRCHI Slurry TBM is designed with a mixed cutter head with eight spokes and eight panels, which will enable the machine to bore in the complicated strata for a long distance.

To solve problems such as mudcakes forming on the cutterhead and slurry discharge blocking, the TBM is fitted with a big-diameter slurry feeding port and several slurry flushing lines to increase the flow rate of slurry.

This is the 5th TBM from CRCHI in India, with four slurry TBMs being used in the Bangalore Metro Rail Project.