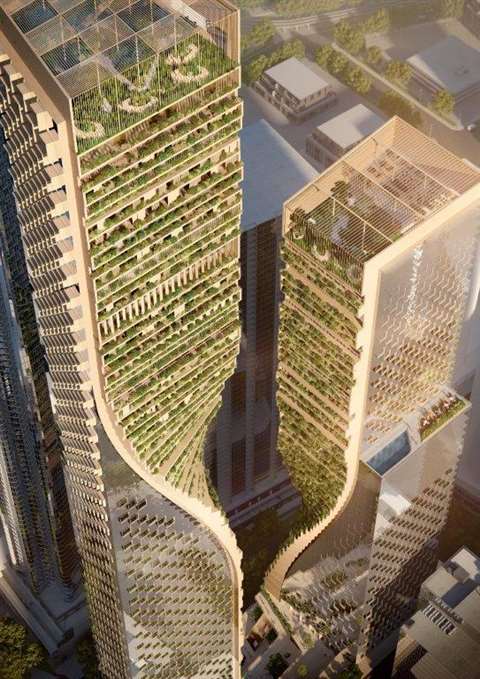 The government of Victoria in Australia has given the go-ahead for the construction of a tower called Green Spine that, as a proposed height of 365m will become the tallest building in Australia.

Located in Melbourne, the tower will be part of the AUS$2 billion (US$1.3 billion) Southbank project, which is being developed by local property company Beulah International.

The Green Spine designed by Dutch architect UNStudio, will be a cantilevered structure composed of two towers, both with a twisting geometric glass façade and terracing.

The taller of the two will be a 356m residential building and will be crowned by a publicly accessible botanical garden. The second 252m structure will accommodate offices and a hotel.

The project is expected to generate 4,700 construction jobs. Upon completion, the tower will also create 3,250 new jobs across multiple industries including office, retail, entertainment, hospitality, and child care.

Caroline Bos, UNStudio founder, said, “Today is a day to celebrate on many fronts with the planning approval signalling a momentous achievement for all involved.

“We are honoured that Southbank has received unanimous support for its design. From the initial concept to one that has evolved into a ground-breaking global collaborative project, the outcome is an exciting prospect.”