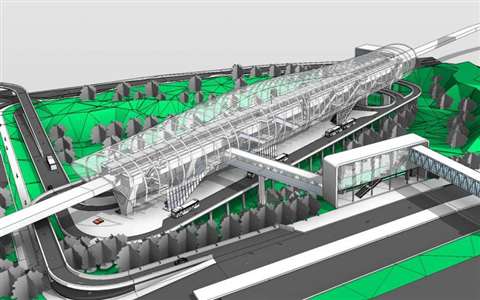 Artistic rendering of one of the stations along the Mexico to Toluca Inter-urban Train route, designed by Sener

Tunnel boring machines (TBMs) have completed a 9.5km twin rail tunnel that is part of the Mexico City to Toluca Inter-urban Train project in Mexico.

Twin TBMs – called La Mexiquense and La Marquesa – worked together to extract a total of about 570,000m3 of material, and as they drilled, 6,312 rings of concrete were simultaneously installed.

The full route between Mexico City and the metropolitan area of Toluca will be 58km in length, with two terminals – at Zinacantepec and Observatorio – and four intermediate stations – at Pino Suárez, Tecnológico, Lerma and Santa Fe.

With a design speed of 160kph, it was said that the link will reduce travel times between the two locations to 39 minutes - compared to 55 minutes by car on the highway.

The US$3.18 billion project is part of the Mexican government’s National Plan for Infrastructure. It has been estimated that 300,000 passengers will use the tunnel per day, with that number expected to increase to 500,000 by the year 2047.

Trains are due to start operating along the line in mid-2019 – contrary to the original plan to start in 2018.