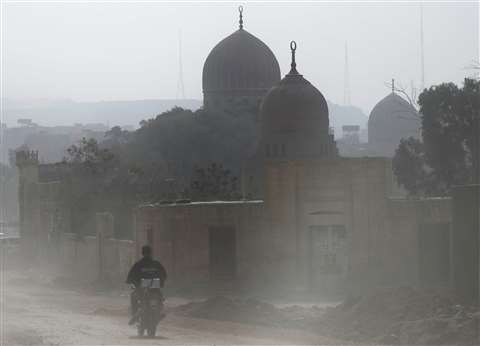 A man rides his motorcycle amid the rubble of demolished mausoleums, cleared to make way for the construction of al-Fardous flyover through graveyards, allegedly from the Mamluk era, at the Northern Cemetery known as “City of Dead”, in the Cairo Necropolis Egypt December 8, 2020. REUTERS/Amr Abdallah Dalsh

The Egyptian government has been criticised for damaging and even destroying historical buildings and structures in the capital of Cairo as it ramps up its programme of infrastructure spending.

The city’s two main cemeteries, known as the City of the Dead, face partial demolition due to a plan to build a large highway that will cut through Cairo in a bid to ease the capital’s congestion problem.

Under the rule of President Abdel Fattah al-Sisi the country in undergoing a huge infrastructure drive. It is estimated that, by 2024, around US$70 billion will be spent on transport projects alone.

Cairo’s population is approximately ten million people and, as a very urban city, options for new infrastructure are limited. However, critics say that large parts of the historical city are being lost.

According to the Financial Times, conservationists and families who have proposed tunnelling the new highway under the cemetery, have petitioned the president to save the area, arguing its destruction would lead, “to the loss of parts of the historic memory of the Egyptian nation”.

One of the largest infrastructure schemes in the world has an aim of reducing congestion in Cairo. The building of a new capital approximately 700km² in size 45km to the east of Cairo has an estimated cost of US$58 billion.