A mega slurry tunnel boring machine (TBM) with a maximum excavation diameter of 16.07m has been produced by China Railway Construction Heavy Industry (CRCHI) for use on the construction of Beijing East 6th Ring Road Tunnel in China. 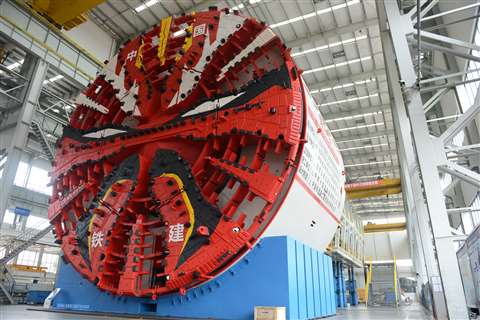 The slurry TBM, named Jinghua, is 150m long, weighs 4,300 tonnes and is higher than a five-storey building.

A TBM with a diameter of 12m and above is usually classified as a mega-sized TBM. Mega TBM’s integrate sophisticated technologies including mechanics, electric, hydraulic, sensing and optics.

The Beijing East 6th Ring Road Reconstruction Project is a 16km long road between the Beijing-Harbin Expressway and the North Luyuan Avenue, including a widened section and a tunnel section. There are two tunnels on the main line, totalling 9,160m, of which 7,338m is to be constructed using a mechanised shield machine.

Its geology is mainly composed of sandy soil, water-rich and high-density sand and interactive layers of silt and cohesive soil. The project faces construction difficulties, such as a large excavation diameter and distance and complicated geological conditions.

Innovations on the machine are said to include segment ring convergence measurement, concurrent grouting of A+B components and a slurry pipe extension system with three-way blocker, which guarantees high efficiency and green construction.