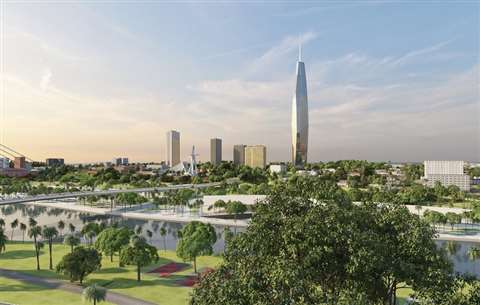 The new 282 metre-tall F Tower will be built in the Abidjan’s business and administrative district.

Besix has been awarded a contract for the construction of the new 282 metre-tall F Tower in the Ivory Coast.

When completed the F Tower will reportedly be Africa’s tallest tower. It will be constructed in the city of Abidjan in the south east of the Ivory Coast and will be the sixth skyscraper in the city’s business district.

While the value of the contract was not disclosed, Belgium-based Besix said it will both manage the project in its entirety and carry out the structural works.

Designed by PFO Africa, the skyscraper will comprise 64 floors of office space. While internally its facilities will include a 200-seat auditorium, externally the building has been designed to reflect the symmetry of African tribal masks.

The external design of the F Tower is intended to pay homage to Africa’s traditional tribal masks.

According to PFO Africa, its façade will feature a double skin with sloping facets and contrasting glazing and reflective white bands to mimic the traditional fabrics used in west Africa.

Pierre Sironval, deputy CEO of Besix Group said, “Besix is extremely proud to participate in the construction of the F Tower. This is our second contract in Ivory Coast, a country that offers a favourable business environment and is economically dynamic.

“In PFO Africa, the leading construction company in Ivory Coast, we have found a high quality partner. Together we were already building one of the largest drinking water production plants in West Africa.

“We look forward to strengthening this alliance by participating in the construction of a building as iconic as the F Tower.”

Besix, which recently won a US$105 million contract to build the new Kangaroo Point Green Bridge in Australia as part of a consortium, said it plans to begin structural works later this month.

Construction of the F Tower is being supported by the Ivorian Ministry of Construction, Housing and Urban Planning.