The Mordovia Arena, one of the venues for the 2018 FIFA World Cup, was completed to a tight timescale thanks to BIM being used on the project. 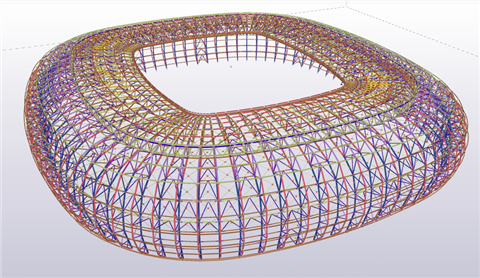 A BIM model of the Mordovia Arena

Belenergomash was tasked with completing the project in one year. With this demanding schedule, the team relied on Trimble’s BIM software, Tekla Structures, to overcome complex design challenges and collaborate with other project stakeholders.

The stadium’s complex steel structures was fabricated with a tolerance of 10mm over a 60m span, including a large number of welded connections.

The base of the stadium consists of 88 L-shaped assemblies 40m in height, and the outreach of the structure is 49m. All of the consoles are constructed of steel pipes, which minimised the overall weight of the roof structures to approximately 6,000 tonnes.

Using Tekla Structures, the team completed the model in three months, which helped to develop accurate and clear assembly drawings within a short period of time. During this time, Belenergomash installed a 3D pipe cutting machine in its workshop and through a direct link between Tekla Structures and the machine, used the model to fabricate thousands of tubes with complex cuts automatically and without errors.

Leveraging the 3D model in the early stages of the project allowed the fabrication team to work in close collaboration with the survey and the design departments. The work was completed on schedule exactly one year after signing the contract.