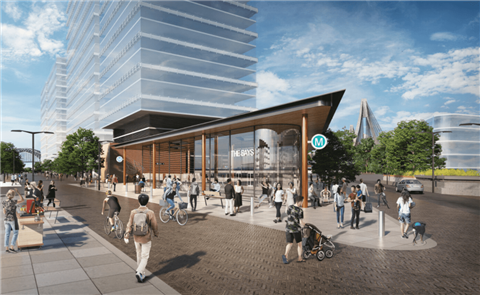 A Ferrovial and Acciona joint venture company has been awarded the AU$1.96 billion (US$1.44 billion) tunnelling works contract for the new Metro West line in Sydney, Australia.

This latest contract award will see the construction subsidiaries of Ferrovial and Acciona  construct an 11km long twin tunnel, running from Sydney Olympic Park and The Bays in New South Wales.

The twin tunnel will form the central section of the 24km-long Metro West line, which upon completion will connect Greater Parramatta with Sydney’s central business district.

According to Sydney Metro, Ferrovial and Acciona will also undertake the excavation and civil works for five new stations located at The Bays, Five Dock, Burwood North, North Strathfield and Sydney Olympic Park.

Ferrovial and Acciona, which are due to start works “immediately”, will use two double-shield, hard rock tunnel boring machines (TBMs) to create the underground twin tunnel.

To accommodate the giant machines the companies, which recently secured a contract for Spain’s new Calle-30 tunnel in Madrid, will also construct a “TBM launch site at The Bays Station and a TBM retrieval site at Sydney Olympic Park Station”.

Around 70,000 concrete segments are anticipated to be used to line the new tunnels, which are due to be completed in 2024.

According to Ferrovial, its contract will create roughly 1,000 new jobs and an additional 500 trainee positions will be made available to the local community.

In total, the entire Sydney Metro West is expected to “create more than 10,000 direct new jobs and 70,000 indirect jobs”.

The news comes just 6 weeks after Bechtel was selected by the New South Wales (NSW) Government as its Integration and Delivery Partner for the new metro rail line.